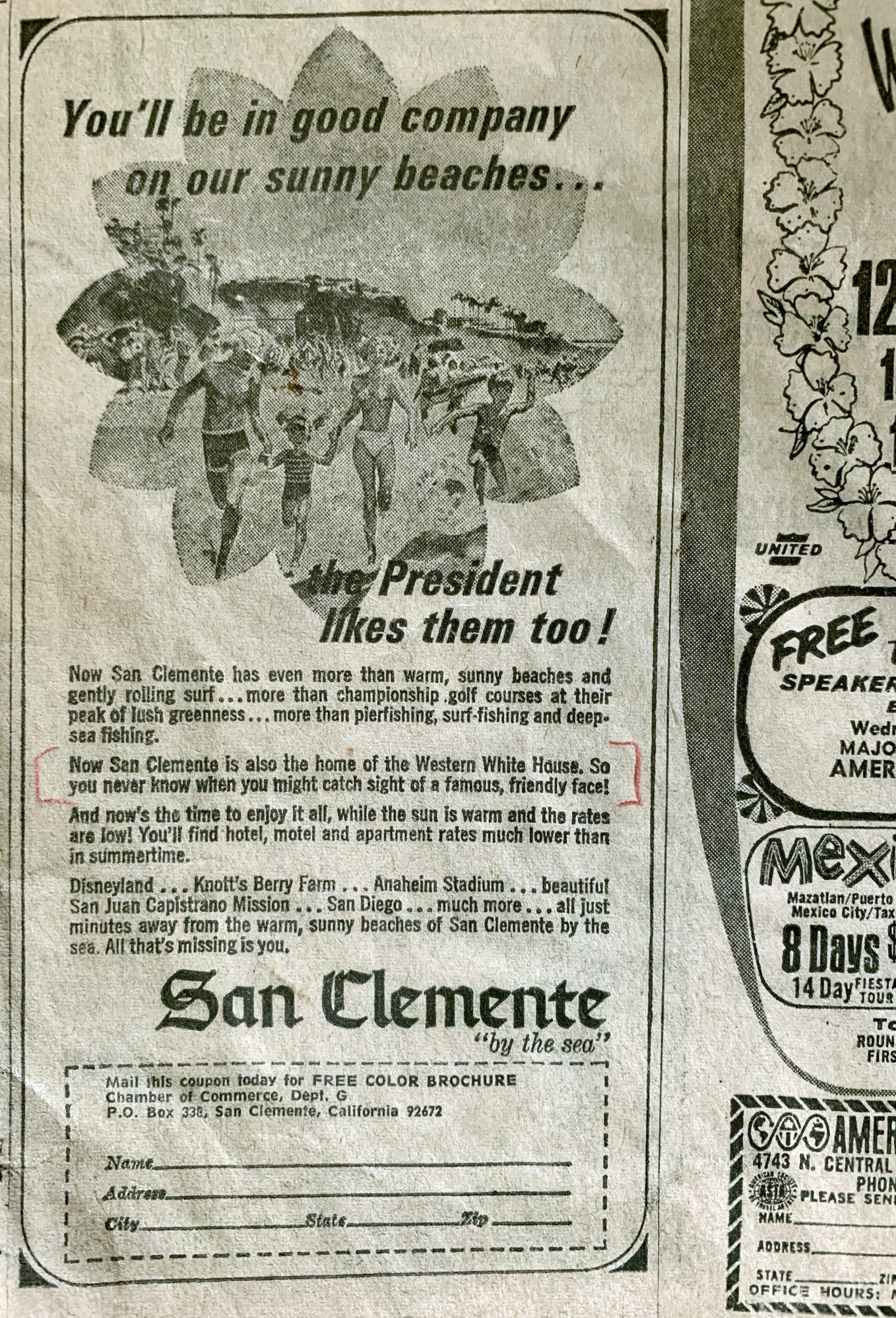 On a Sunday morning in spring 1970, newspaper readers in America’s desert Southwest awoke to the travel pages of The Arizona Republic, discovering a cheerful invitation to visit San Clemente, California.

“You’ll be in good company on our sunny beaches,” the advertisement said. “The President likes them too!”

The ad, produced by San Clemente’s Chamber of Commerce, pictured a family of four, happily romping along the shore. Behind the frolicking four were palm trees, beach umbrellas and scenic coastal bluffs.

The ad proclaimed that “San Clemente has even more than warm, sunny beaches and gently rolling surf … more than championship golf courses at their peak of lush greenness … more than pier fishing, surf fishing and deep-sea fishing.”

In spring 1970, our town still had its San Clemente Sportfishing fleet, based at the end of the pier at least until Dana Point Harbor and Dana Wharf Sportfishing would finish construction in 1971.

“Fishing a-Plenty in San Clemente” was one of our town’s proud slogans, together with “World’s Best Climate” and “Spanish Village by the Sea.”

“Now San Clemente is also the home of the Western White House,” the ad announced. “So you never know when you might catch sight of a famous, friendly face!”

It’s anyone’s guess how many cities’ newspapers across America published the ad. I’m going to guess Phoenix’s wasn’t the only one.

Just imagine that serendipitous family, pictured in the ad, freshly arrived in San Clemente from the dry desert, prancing over a lapping shore break near the pier, wondering if they’d soon stumble into President Nixon.

“Oh my gosh!” they hypothetically stammer, startled as the nation’s 37th president suddenly appears in front of them, smiling broadly, waving to them as he agilely sidesteps a foamy gushing shore break, keeping his wingtips dry.

I recently found a copy of the Arizona Republic’s April 5, 1970 travel section in a cardboard box. A Daily Sun-Post reader had given me a copy. I saved it all these years.

DID THE AD SUCCEED?

Did any tourists spot our president on our beach? Not likely. He was only intermittently in residence. His full-time home was the White House, Washington, D.C.

Even when here, Nixon and his Secret Service agents preferred beach walks in the seclusion of his private sands at Cotton’s Point, far from T-Street or the pier.

The Chamber of Commerce’s ad reflected a rather ambitious vision—entice Arizona residents (as well as “snowbirds” wintering in Arizona) to drive six hours west, patronize San Clemente’s hotels, motels, shops and restaurants and perhaps luck into a photo with The Prez.

IT WAS A NICE TRY

Certainly, the San Clemente ad had competition for readers’ vacation dollars that Sunday morning 50 years ago.

Right next to the San Clemente ad was one offering an eight-day air/hotel Waikiki holiday for $249, flying from Phoenix.

Also advertised was a 14-day Alaska cruise out of Los Angeles, starting from $450.

And a four-month world cruise for as low as $18 a day.

Seriously. Who would pick Siberia over San Clemente?

The timing of the San Clemente beach ad struck me as odd.

The Chamber of Commerce was trying to lure Arizona residents away from home at a time of year when the Phoenix area was typically balmy—with plenty of nice swimming pools at hand including Big Surf, a waterpark that had just opened in 1969, one of the nation’s first wave pools, still promoted today as “the 2.5 million-gallon Waikiki Beach.”

Regardless, San Clemente’s promoters trumpeted “now’s the time to enjoy it all, while the sun is warm and the rates are low! You’ll find hotel, motel and apartment rates much lower than in summertime.”

That San Clemente sales pitch would likely do better in Buffalo, where it was apt to be 38 degrees outside.

“Disneyland … Knott’s Berry Farm … Anaheim Stadium … beautiful San Juan Capistrano Mission … San Diego … much more … all just minutes away from the warm, sunny beaches of San Clemente by the sea,” our Chamber of Commerce teased. “All that’s missing is you.”

“In 1975, if the Federal Highway Administration keeps its present schedule, it will be possible to drive from New York to California—without breaking the speed limit—in two days,” the story said.

It would then become possible to drive from New York to San Francisco in 48 hours and 20 minutes, at an average 60 mph, the trip spanning 2,899 miles along Interstate 80, the longest of all of America’s interstate routes.

Some 2,273 miles had been completed, the story said. The rest was being engineered.

In 1975, by the time I-80 was likely finished, so was President Nixon—no longer President.

He then was residing full-time in San Clemente, recuperating from poor health and the Watergate scandal that had led to his 1974 resignation.

In seclusion, he still could enjoy San Clemente’s beach at Cotton’s Point. He occasionally played golf at Shorecliffs. Steadily regaining his health, he sought to rehabilitate his image as a world statesman.

In 1980, he and wife Pat sold the San Clemente home and moved to New York to live closer to family.

I’m guessing Dick and Pat flew, forgoing that once-heralded two-day road trip across America along I-80.