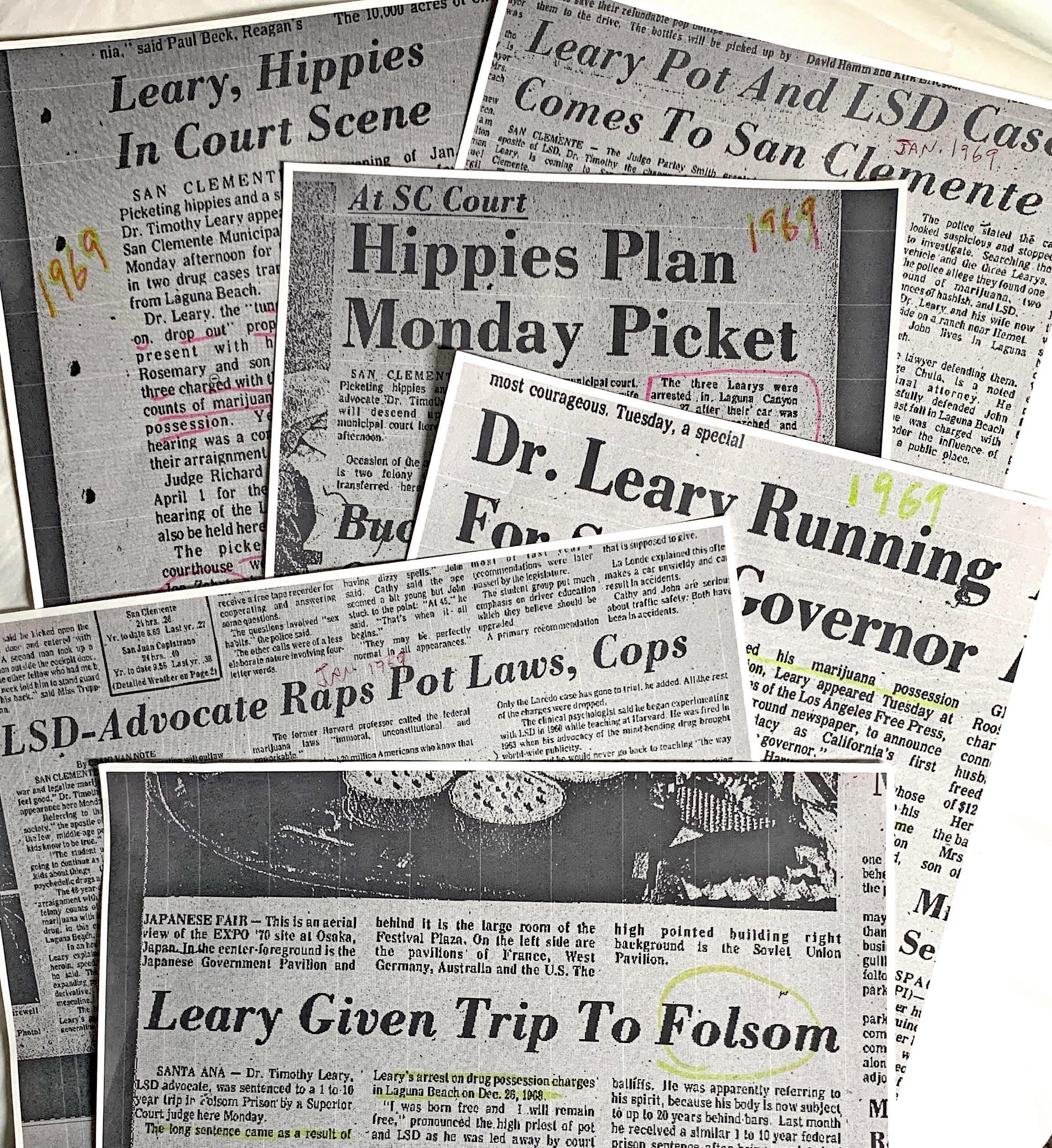 CoastLines: A Wild Tale that Had an Asterisk in San Clemente

How did a one-time Harvard professor turned grinning hallucinogenics guru become the target of a rollicking, high-powered, 28-month worldwide manhunt?

Fifty years ago, Dr. Timothy Leary was on the run, having escaped prison in September 1970, liberated from a marijuana rap with help from wily cohorts.

I had heard about Leary’s post-prison escapades. So, when I learned that there is a book about it, I decided to give it a read. I wondered if there might be anything in the book related to Leary’s five minutes of fame in San Clemente in January 1969, when the Daily Sun-Post wrote about and interviewed him.

As it turns out, there isn’t much about San Clemente in the book.

But I must say The Most Dangerous Man in America: Timothy Leary, Richard Nixon and the Hunt for the Fugitive King of LSD may just be the most captivating nonfiction I’ve read among many books during this pandemic year of 2020.

If you’re looking for a holiday gift idea for someone you think might get a kick out of this, go for it. Or get the book for yourself.

It has a San Clemente angle by default, since in 1969 President Nixon had purchased a home in San Clemente. He operated his Western White House here for part of every year from 1969-74. And the longer Leary was at large, the more intensely Nixon strove to reel him in.

This was the era of Vietnam War protests and an expanding youth drug counterculture. There were terrorist bombings and fires across the nation.

As the book describes it, Nixon felt increasingly surrounded by enemies, which led to the creation of a top-secret White House counter-espionage team.

On July 23, 1971, while Leary was in Europe seeking to avoid extradition, the White House brain trust decided that the President needed a face to put on Nixon’s War on Drugs—a villain to personify American kiddos’ descent into the abyss of dope.

The team tossed around the names of a couple of notorious Mafiosos, trying to pick “someone Nixon can capture and hold aloft as a symbol,” the book says.

A consensus emerged, documented by hidden microphones Nixon had installed in the White House, settling on a fugitive who had fled justice in 1970 to live in exile with a group also on Nixon’s radar—the Black Panthers—in Algeria.

The poster child for Nixon’s War on Drugs would be Leary, the high priest of LSD who had coined the counterculture phrase “turn on, tune in, drop out.”

The book recounts the moment:

“Leary, Leary, Leary … Timothy Leary, Timothy Leary!” Nixon and his aides began shouting. The room convulses in excited laughter. Nixon bellows triumphantly to the others: “Well, we’ve got room in the prisons for him!”

The government of the United States would need to find him, grab him and bring him home to justice.

I won’t ruin the ending for you. Leary’s cat-and-mouse adventures and misadventures overseas, from Algeria to Switzerland to Austria, to Afghanistan and beyond, trying to elude the Feds, were a rollercoaster ride.

HOW LEARY GOT BUSTED

The book cites two marijuana busts that sent Leary to prison in 1970. How times have changed.

“At a border crossing at Laredo, Texas, cops unearthed a tiny stash of pot in a snuff box hurriedly tucked inside his teenage daughter’s panties,” authors Bill Minutaglio and Steven L. Davis wrote.

The other case involved two charred marijuana joints that police found in the ashtray of Leary’s car in Laguna Beach.

The two roaches were a felony in California—enough, the book says, to disqualify Leary from his announced plan to run for governor in 1970 against incumbent Ronald Reagan.

The book says this: “The Reagan-appointed judge who imposed the maximum sentence, up to ten years, called Leary an ‘insidious and detrimental influence on society … A pleasure-seeking, irresponsible Madison Avenue advocate of the free use of LSD and marijuana.”

When Leary was put behind bars, the book says, “the jailer slammed the cell door shut and sneered: ‘For you we throw away the key.’ ”

What the book doesn’t mention is that Leary, set to be tried in Laguna Beach Municipal Court in January 1970, asked for a change of venue. He was assigned to San Clemente Municipal Court.

That was big news in San Clemente. It resulted in some exciting Daily Sun-Post headlines:

I was in my junior year of university in Los Angeles back then, so I missed all this. Craig Van Note, my predecessor as the Sun-Post’s San Clemente reporter, interviewed Leary before his arraignment. Leary insisted that America’s establishment was uptight and that psychedelic drugs were “a peaceful, loving experience.”

He told Van Note that the only drugs he advocated were ones he called mind-expanding such as marijuana, hashish, LSD, peyote and mescaline.

His marijuana case didn’t stay in San Clemente. It ended up in Santa Ana Superior Court. A March 1970 Sun-Post story titled “Leary Given Trip to Folsom” reported that the LSD advocate was sentenced to 1 to 10 years. That was on top of another 1 to 10 years he’d been given weeks earlier for the Texas marijuana bust.

“I was born free, and I will remain free,” Leary was quoted as saying as he left court. Six months later, he would escape—not from Folsom but from the low-security institution to which he was ultimately assigned: California Men’s Colony at San Luis Obispo.

If that sounds like a lightweight escape, wait till you read how Leary did it, assisted by hardcore revolutionaries who weren’t all about peace and love. After that, Leary was given a new look and a new ID and spirited off to France and Algeria, the world wondering his whereabouts. The chase was on.

Leary soon realized he’d gotten in over his head, having to make hardcore revolutionary statements and deal with revolutionary characters he hadn’t anticipated—not just the tentacles of the U.S. government.

But he was clever. Somehow, he survived one tight situation after another. All the while, he managed to maintain his trademark ear-to-ear grin. Don’t ask me how it ends. Read it.

Adoptable Pet of the Week: Sully