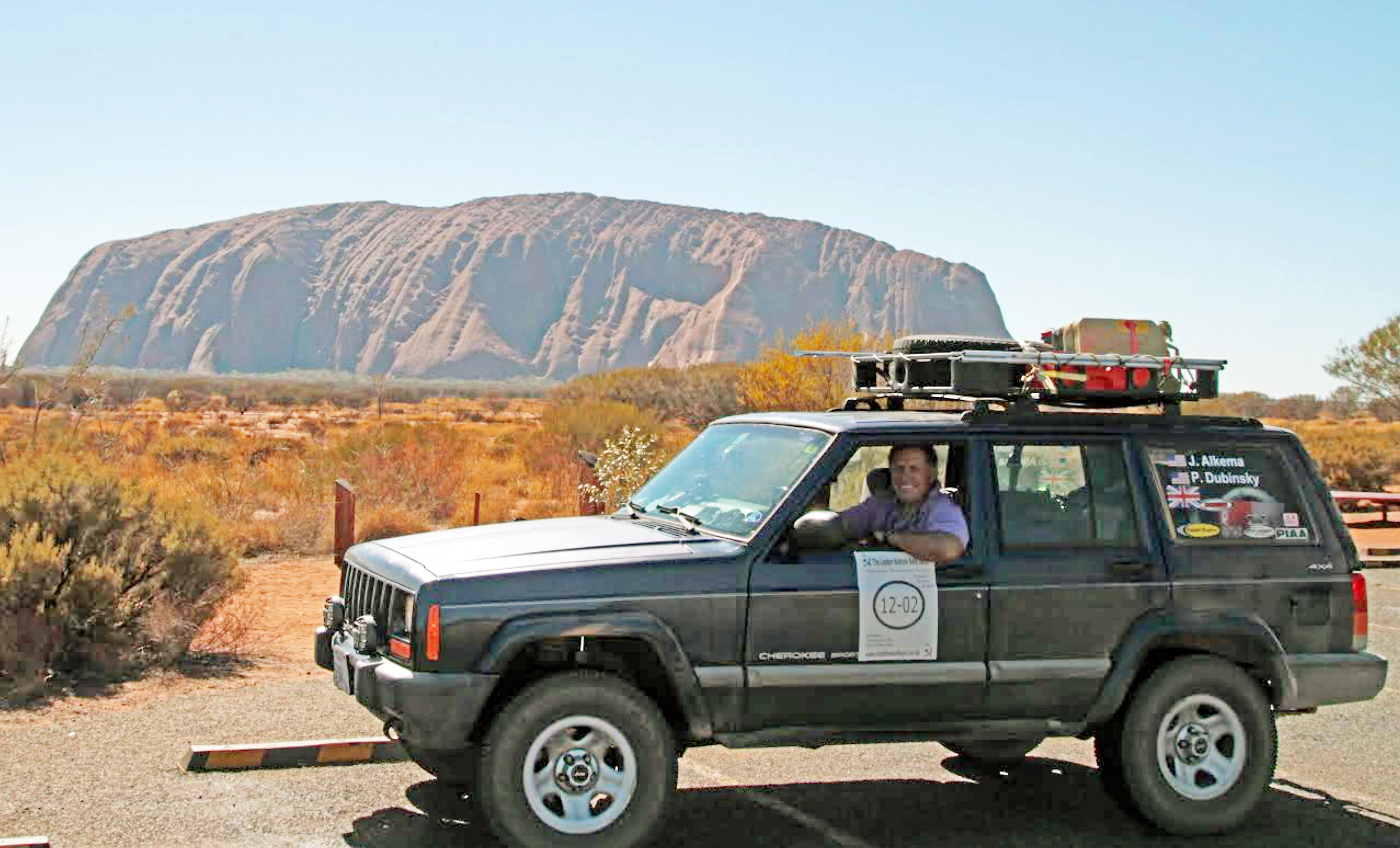 A human-interest story that I wrote about John Alkema’s 2012 adventure was one of the more outlandish tales I shared with readers during 50 years of journalism.

You may have read his remarkable life story in an April 9 San Clemente Times obituary. I was intrigued by the obituary. I hadn’t known most of what I read.

“Yes, quite a life well-lived!” Alkema’s wife, Linda Verraster, wrote to me when I contacted her for this story.

His life was so interesting that the obituary didn’t even mention the global odyssey that had so astonished me when I wrote about it in 2013.

The seed for it was planted when Alkema, a retired Los Angeles County firefighter, had challenged himself to try to drive across the United States only on dirt roads.

As of June 20, 2013, when the Orange County Register published my story about him, Alkema had made it to Mount Rushmore.

In 2012, he’d gotten sidetracked, deciding to do something else—take a rumble in his 2001 Jeep Cherokee on roads paved or dirt—around the world.

He and friend Paul Dubinsky from South Carolina drove the first 2,700 miles from San Clemente to Baltimore, then put the car on a cargo ship to Germany.

Flying there, they drove to France, then set out to travel east to San Clemente.

Three years later, Alkema and Dubinsky reunited in London to join a British “banger rally,” a caravan of old cars covering 3,000 miles through the Balkans to Bulgaria in an English car they bought for $500.

Bangers, as the Brits call them, are necessarily cheap, so it’s no big deal to leave them at the destination—maybe donate them to a local charity.

So what could Alkema and Dubinsky do to top the banger rally? Take Alkema’s Jeep Cherokee around the world.

OK, so it was not quite a real banger, I wrote. Alkema estimated it was worth around $3,000, but it was still old enough that he and Dubinsky could walk away from it if something went terribly wrong.

Repairs could be a problem. Vast expanses of Russia would be worlds away from Jeep auto parts. Alkema trusted his beloved Cherokee.

“He and Dubinsky took spare parts—starter, generator, fuel pump, coil, etc.,” I wrote. “When a shock mount broke in Russia, a resourceful mechanic inspected it, and in less than three hours built one from scratch that was better than factory, Dubinsky said.”

“The car spent more time without us than with us,” Dubinsky said in our 2013 interview—three weeks crossing the Atlantic, three weeks from Russia’s Pacific coast to Australia, five weeks from Australia to Chile and three days from Colombia to Panama.

During Cherokee shipboard time, Alkema and Dubinsky flew home to rejoin their wives, who they insisted were supportive of this boys-will-be-boys adventure.

Departing Paris, Alkema and Dubinsky drove to Italy, Austria and Slovakia. At Kazakhstan, they joined a 2012 banger rally from London to Tashkent. For five days, they reunited with like-minded drivers they’d met in 2011.

“At a fork in the road,” I wrote, “the Americans set off on their own.”

“We’re not very good tourists,” Alkema told me. “We don’t go to museums. We both like to drive.”

Alkema described driving the switchbacks of Italy’s Stelvio Pass. He described being pulled over by a Ukrainian cop for speeding, leading to an “extortion” ticket, as Dubinsky described it.

The Americans talked the cop down from 300 Euros to 20 Euros, drawing out the conversation so long the cop just wanted to leave to pursue others, I wrote.

“We never felt threatened,” Alkema told me. The vagabonds rented rooms along the way or camped overnight if unable to find a room.

“One day, they drove 16 hours in Siberia, finding a room after midnight,” I wrote.

“The travelers stayed healthy, adapting to local foods despite a language barrier and menus they couldn’t read,” I wrote. “At a cafe in Russia, the Americans obviously were confounded over what to order when a diner spoke up, “OK, guys, what do you want?”