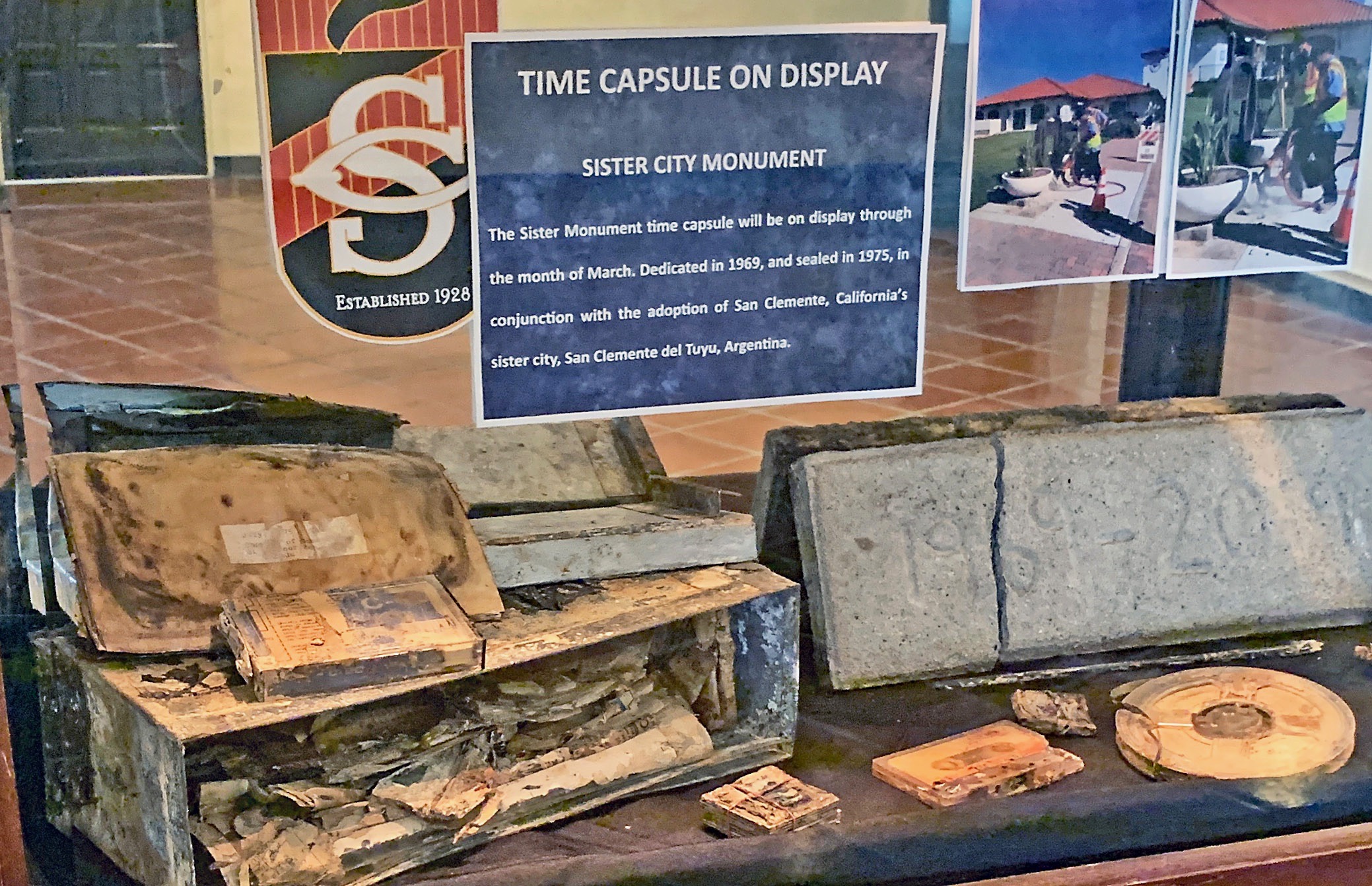 CoastLines: Artifacts Didn’t Survive . . . But an International Friendship Can

Can you imagine the audience reaction as a waterlogged container arose from its pedestal, the artifacts ruined?

Prudently, the city dug up the time capsule in advance. City staffers discovered that the sister city association’s volunteers, who had erected a monument saluting San Clemente del Tuyú, Argentina, in 1975, had noble intentions, but they lacked technical expertise.

The yucky artifacts that emerged are being displayed in the lobby of the Community Center through the month of March.

You may wonder what happened to our sister city monument. It’s missing from the sidewalk, dismantled to remove the time capsule. The site was cleaned up and cordoned off.

Samantha Wylie, the city’s recreation manager, said the monument has lots of corrosion and the city will try to fix that, to reinstall it beside the building.

It would no longer rise stand-alone along the sidewalk. It would occupy an alternate place of honor while freeing up its former location as more space for special events.

Something similar happened nearby on the grass in 2012. A 40-foot tree that had served as the city’s holiday tree partly collapsed. The surviving portion posed a danger. The tree was removed.

That freed up more space on the grass for special events. A new holiday tree was planted on the corner of Avenida Del Mar and Calle Seville, a more strategic location now displaying a tree well to identify the Community Center.

A renewed monument to our sister city could help keep alive a 50-year international friendship, a feel-good gesture to greet anyone walking by.

The Rotary Clubs of San Clemente, California and San Clemente del Tuyú formed sister city associations in 1969, after the Argentines had learned our San Clemente existed.

The Argentines tried to find us on a map, couldn’t, wrote to our Rotary Club and asked where we were. Our Rotary Club wrote back that we couldn’t find their San Clemente, either. Everyone had a laugh.

Our San Clemente is a Pacific beach town, about the same latitude north as San Clemente del Tuyú is south on the Atlantic. We both have piers. Their summer is our winter; our winter, their summer.

In 2019, that inscription caught the curiosity of a passerby who asked on Facebook, could there be a time capsule? Someone tagged me, wondering if I knew.

I didn’t. I spent six days at the library, laboriously scrolling through seven years of Daily Sun-Post microfilm seeking evidence. Finally, reaching July, 1975, I found the monument’s unveiling on the front page, with a brief mention that a time capsule was planned.

I had to pour through six more months of microfilm to find a sister city column mention that a time capsule was now buried.

The city decided to unearth it for San Clemente Day.

I took a six-month sabbatical from the Sun-Post in 1975 to explore Central and South America, backpacker style, on the cheap, aiming to visit our sister city.

I carried a letter of introduction from our Rotary Club.

The mayor of San Clemente del Tuyú welcomed me warmly. I returned to write an article, together with two full pages of pictures showcasing our sister city.

There were social events locally, trips back and forth, exchanges. The warmth of the friendship was fun to cover.

The bond weakened, at our end, after 25 vibrant years, as the founding members aged and passed on. Since 1999, it’s been pretty much dormant, although some of our retired firefighters maintain firefighter friendships.

THEY STILL LOVE US

In 2003, I flew to Argentina to see how our sister city had changed. I didn’t announce myself as a reporter. I just showed up as a tourist—and was received very warmly. When word got out where I was from, I instantly found myself as guest speaker at that evening’s Rotary Club dinner. The radio station interviewed me.

Happily, our sister city still had its monument to us. A large globe, showcasing where our two sister cities are, also was still prominent downtown.

I observed how the town blocks off its main street, every summer night, until 2 a.m., as people dine late into the night, revelers dance the tango, caricature artists sketch, children play, families party. The next day, the beaches are deserted at 11 a.m.

As vacationers awaken, the beaches fill to the brim.

Standing on a beach packed with people in 2003, I watched hordes around me suddenly stand up, clapping, at a slow pace, in unison.

“What’s up?” I asked in Spanish. Atop a nearby tower, a lifeguard had raised a flag. A boy stood by him.

“Niño perdido!” someone told me. A lost child.

Immediately, all parents looked around for their tiny ones. A mom approached the tower to retrieve her child. The crowd erupted. And everyone sat down.

That became the initial paragraphs for my 2003 story about our sister city.

I returned in 2006, 2010 and 2017. Each visit yielded a new angle to bring home and share. I enjoyed the beach, an eco park, hot springs, Mundo Marino and friendly people.

I’d be happy to facilitate contact if our Rotary Clubs, the city or anyone else has interest in reestablishing even a simple outreach. Or just go visit. The locals would be thrilled. And I’m guessing the beach town will captivate you.