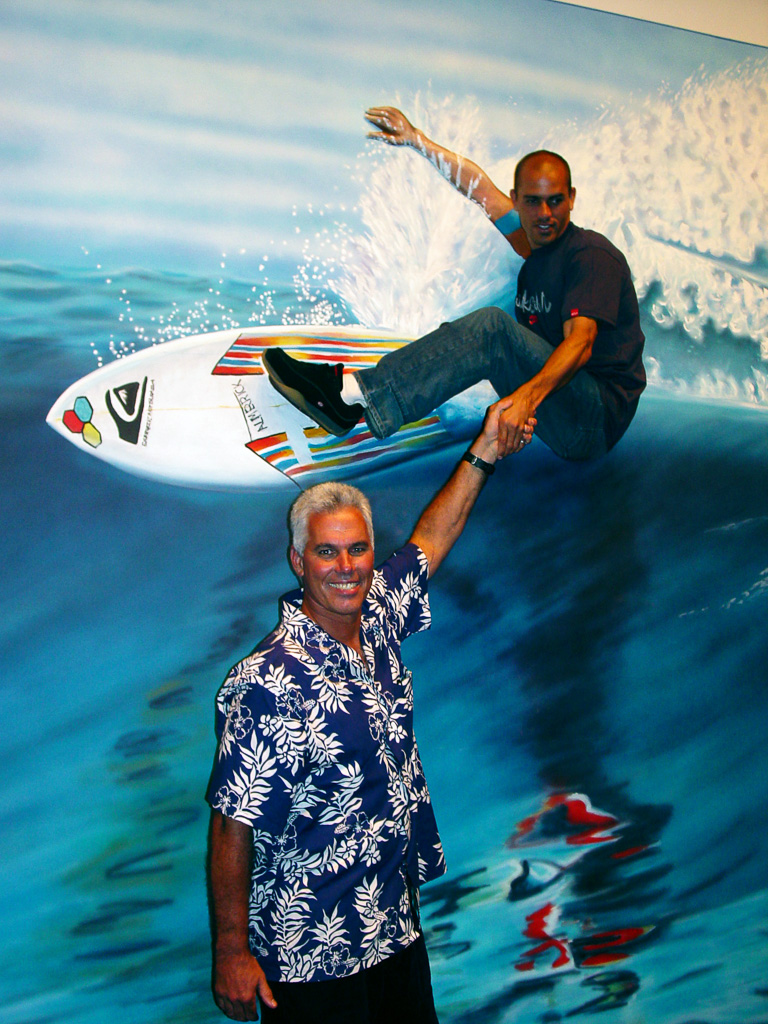 CoastLines: Behind the Pageant of the Masters Featured Painting

If you enjoyed last week’s column about San Clemente surf artist Gary Prettyman’s painting of Kelly Slater at the Laguna Beach Pageant of the Masters, I have a small back story to share.

Gary’s painting is from a picture I took.

I photographed it in 1990 during a pro surf contest Kelly won at Trestles. Family members who recently attended the pageant told me how excited they are that my photo is the star of the show. I told them, “But it’s not my photo … it’s Gary’s painting!”

In 1991, Gary asked to view some of my color slides to pick an image to paint. He paid me a flat fee for the rights. Back then, I was shooting surf photos commercially, alongside my San Clemente newspaper work. I shot primarily for surf magazines. The publisher of the paper, Stan Manning, was fine with it.

I never imagined that Gary’s painting would become a living picture at three Pageants of the Masters, twice as the pageant’s centerpiece.

After three pageants, it’s well known. Please realize, no credit goes to me. Gary’s creative interpretation of my surf photo is what enchants audiences.

The surf action in my photo was nothing spectacular. I could easily have tossed the color slide into the waste bin, a throwaway. The sunlight, when I snapped the photo, was midday haze at a surf contest. Not so great. Still, Gary saw something in the photo.

He liked the liquid sheen, the reflection of Kelly’s contest jersey and wetsuit on the water. He felt he could make it “pop.” And he did.

I’m excited to even have a tiny role in the success of the painting. It’s a reflection of one of my early goals in journalism, going back to the 1970s, to promote surfing as a mainstream sport.

Our five-days-a-week paper gave more attention to surfing than any newspaper I saw at the time. All the while, I felt that rising amateur surfers, able to perform brilliant moves like paid pros, weren’t getting their due in surf magazines.

In 1986 while saving up for a planned trip around the world, I saw San Clemente’s Shane Beschen and Florida’s Kelly Slater starting to emerge as the elite West and East Coast surfers of their age group. They would meet at nationals. Kelly would win. Instead of the year-long globe trot, I invested in some frightfully expensive camera gear. The goal was to shoot for the magazines and the paper, see some of the world’s best beaches and get Shane and other rising talents more magazine exposure.

I got to know Kelly a little better during a surf trip to Barbados in 1989 with the U.S. surf team. I also captured a favorite image of Kelly that year, riding a late-afternoon barrel at Trestles. Surfing Magazine accepted the color slide but never published it. I shot the image in low light, near sundown, using a slow shutter speed that blurred the water cascading over Kelly, a surreal effect.

I didn’t have that color slide in 1991 to show Gary. It was at the magazine, which returned it to me later. I wonder if Gary would have picked it.

Then again, who can complain about what Gary accomplished with his pageant painting titled “Cutting Glass?” I am humbled.

I went on to photograph 11-time world champion Slater in France, Australia, Florida, California and Hawaii. I was blessed to experience beaches from South America to Indonesia to South Africa. I’m happy to say surfing has come of age. So did Kelly. So did Shane, who was among Kelly’s biggest pro rivals through the 1990s.

We published some cool local stories about Shane through his career, especially in his biggest year of 1996 when he placed second to Kelly for the world title. I’ll never forget one early story, about how Shane’s sponsorships grew during high school and he was making more money than his teachers.
“A surfer and his sport come of age,” the headline said.

There were countless stories about other homegrown professional surf athletes, far too many to list here and risk hurt feelings if I miss someone.

I hope you’ll get to see the living picture of Gary Prettyman’s art at the pageant this summer.

Just remember: it’s Gary’s art, not mine. It’s what Gary made of a rather ordinary photo.

Fred Swegles is a San Clemente native with more than 46 years of journalism experience in the city.