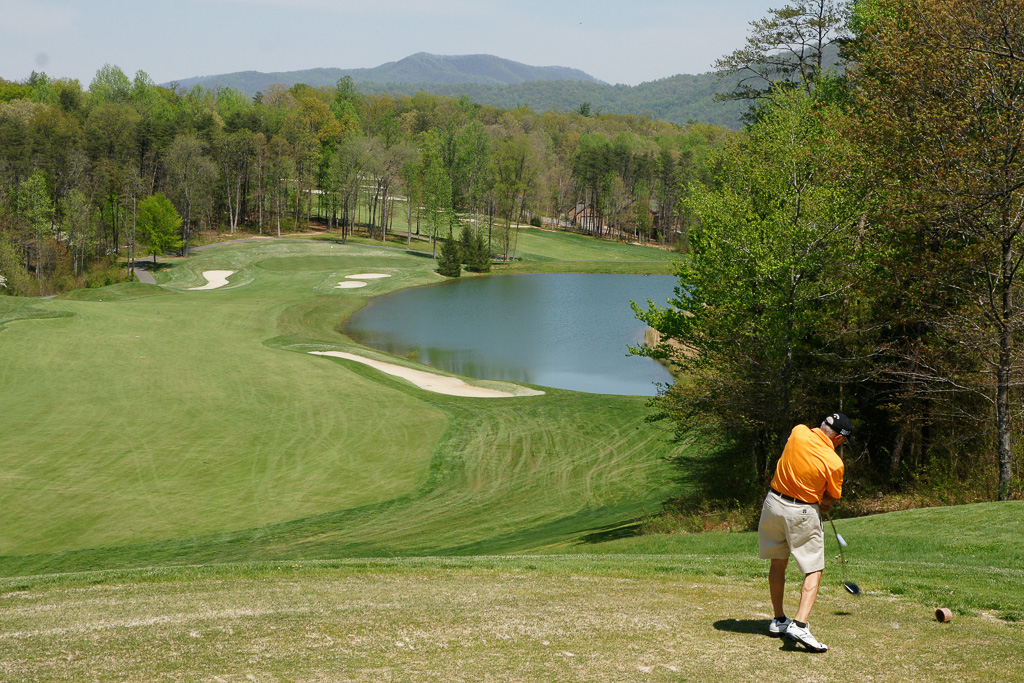 San Clemente resident Nick Karnazes acknowledges he is fortunate to be here to sign copies of Chicken Soup for the Soul this weekend at Aliso Viejo’s Barnes and Noble bookstore.

The latest book in the Chicken Soup series, titled “The Power of Yes,” tells 101 inspiring stories, including his.

In it, Karnazes recounts how he crisscrossed the country in 2009 in his motorhome, intent on playing 96 rounds of golf in 96 days across 48 states.

He accomplished it and then some, turning 73 during the trip. He drove 12,763 miles, mostly solo, from one golf course to the next. All the while, he was defying a dire medical warning.

Nick Karnazes tees off in 2009 at Stoney Creek resort in Virginia, en route to completing 108 rounds of golf in 96 days across 48 states. Photo: Fred Swegles

During his 2009 golfing odyssey across America, Nick Karnazes and a goose wait to see if he sinks his putt. Photo: Fred Swegles

Nick Karnazes, pictured in 2009, waits to see if he has sunk his putt at Stoney Creek golf resort in Virginia. Photo: Fred Swegles

In 2009, Nick Karnazes juggles golf balls in between rounds at Cacapon resort, part of a state park in West Virginia. Photo: Fred Swegles

Days before his departure, his physician warned him his heart wouldn’t survive the trip. He decided to go anyway, having trained, made commitments and arranged sponsorship with Callaway Golf.

He didn’t divulge the grave warning to his wife, Fran, or to their son, Dean, the world-famous “Ultramarathon Man” whose 2006 feat running 50 marathons in 50 states in 50 days had inspired Nick.

Nick only confided the warning to oldest son, Kraig, who would keep in near-constant touch with him electronically during the 14-week odyssey.

He shared his adventures in a blog Callaway had set up for him.

There was one hitch, a big one.

Karnazes, who had planned to walk all 18 holes on each course, never relying on a golf cart, had to abandon that after three golf courses.

On the 15th hole the next day, he felt heart palpitations and numbing in his left shoulder. He checked himself into a hospital. The doctor advised him not to continue the trip.

Karnazes insisted the problem was that he had not eaten all day. The next morning, well-fed, he felt much better. He walked the hospital’s 80-yard hall 15 times to convince the doctor to release him on a strict set of conditions.

Thereafter, he followed those conditions, paid extra attention to his diet and nearly always used a golf cart.

On day 36, in Virginia, I met up with Karnazes along the Blue Ridge Parkway, then spent two days with him to craft a snapshot of his journey in words and pictures, spanning visits to two states, two scenic golf courses and the Potomac River.

When Nick concluded his travels, he outdid himself, completing 108 rounds of golf in the 96 days.

A post-trip examination led his doctor to immediately schedule a quadruple bypass.
“He said you have four arteries that are 98-percent blocked…you’re a walking time bomb,” Karnazes said.

And today? “My health is great,” he said.

* At age 82, still averages 12 rounds of golf per month at San Clemente Muni.

* Takes no drugs or supplements.

* Credits much of his good health to 57 years of Fran’s Greek cooking.

* Stands when eating or watching TV (so does Fran), on advice from son Dean.

* Plans to visit Greece this fall with Fran, as they do yearly, to witness Dean’s sixth annual Navarino Challenge (see Dean’s latest book, The Road to Sparta).

What: Promotion of a  new “Chicken Soup for the Soul” book, titled “The Power of Yes”