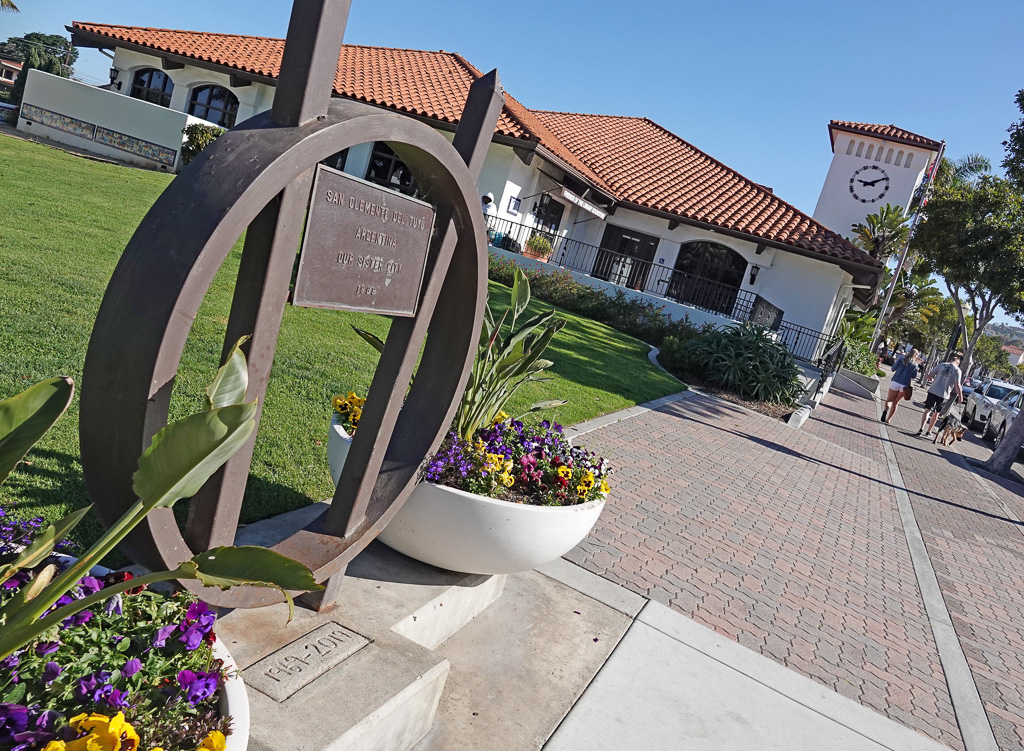 CoastLines: Is There a Capsule Buried on Del Mar? Only Time Will Tell

Local resident Mark Jones posed a fun question on Facebook the other day: “Will there be a breaking open of a time capsule sometime this year? And if anyone has the history of this, please share! It’s been 50 years now!”

Most people, myself included, walk by San Clemente’s sister city monument on Avenida Del Mar without noticing that the concrete pad bears an inscription, “1969-2019.”

That certainly would imply a time capsule is underneath.

I was invited to look into this. I hate to admit that it took me five long, tedious days at the San Clemente Library to confirm Mark’s hunch, pouring through seven years of microfilmed archives of the San Clemente Sun Post.

It was dizzying, but also satisfying, when I finally found confirmation that a time capsule exists inside a metal box under three inches of concrete.

San Clemente, California, and San Clemente del Tuyu, Argentina, became sister cities in 1969, a year before I started a long career with the Sun Post. I told Mark I had no recollection of when that monument was built.

The city searched but wasn’t able to provide any dates. And I couldn’t find any old-timers who remembered when volunteers built the monument, or if there’s a time capsule. The sister city founders are no longer with us.

So I meticulously scrolled through the years 1969-75 until I struck pay dirt. The monument was dedicated on July 19, 1975. Elena Paniagua from the sister city association in Argentina also was able to confirm that.

As it turns out, I covered that dedication. So much for my memory skills! The sister city folks stated that day that a time capsule would be inserted “soon.”

That meant I had to keep on scrolling through microfilm, looking for random, infrequent “Our Sister City” columns, until a Dec. 18, 1975, column confirmed a time capsule had just been sealed.

What’s inside? Well, City Hall supposedly has a two-page typewritten list. City Hall’s Laura Campagnola did a search for sister city documents and was able to provide me with 200 pages, but there was no list, nor any indication of the monument’s timeline or any time capsule.

“We can’t help but wonder,” the column said, “how those who open the monument and inspect the evidence of our small effort to develop international understanding and goodwill between two oceanfront cities on two continents, 10,000 miles apart, with opposite seasons of the year, will evaluate our efforts.”

Want to have a look? The ball is in the city’s court.

I’ve visited San Clemente del Tuyu five times, dating back to 1974. You should go. It has a pier, enormous sand dunes and a lively summer ambiance from December through February. It has thermal baths, a historic lighthouse, a nature reserve, South America’s Sea World, nice eats and very friendly people.

Both towns have the same monument. San Clemente del Tuyu erected one in 1971. Our town’s association replicated it. Recently, the Argentine sister city association installed an updated version of its original.

Hey, great excuse for another visit!

On another note, I received three replies to last week’s column about the rain. All three suggested that the season-to-date rainfall count I got from our city’s website, 6.68 inches, was very low. They made a credible case for seasonal rainfall counts of 16 inches, even 20 inches.

I asked our lifeguards about the city rain gauge on the pier. A lifeguard said they would look into it. I haven’t heard back. The odd thing was, when I asked the National Weather Service what rain count they had for San Clemente, they didn’t have us, but they did recite season-to-date figures of 7.96 inches for Newport and 8.84 for Oceanside. Those were a bit higher, but not much, so I didn’t question them.

The NWS’ 30-year averages for Newport and Oceanside also seemed comparable to the 21-year averages that I had for 1985 to 2006, kept by local weather watcher Bob Kabel.

Thanks, readers, for the heads-up.