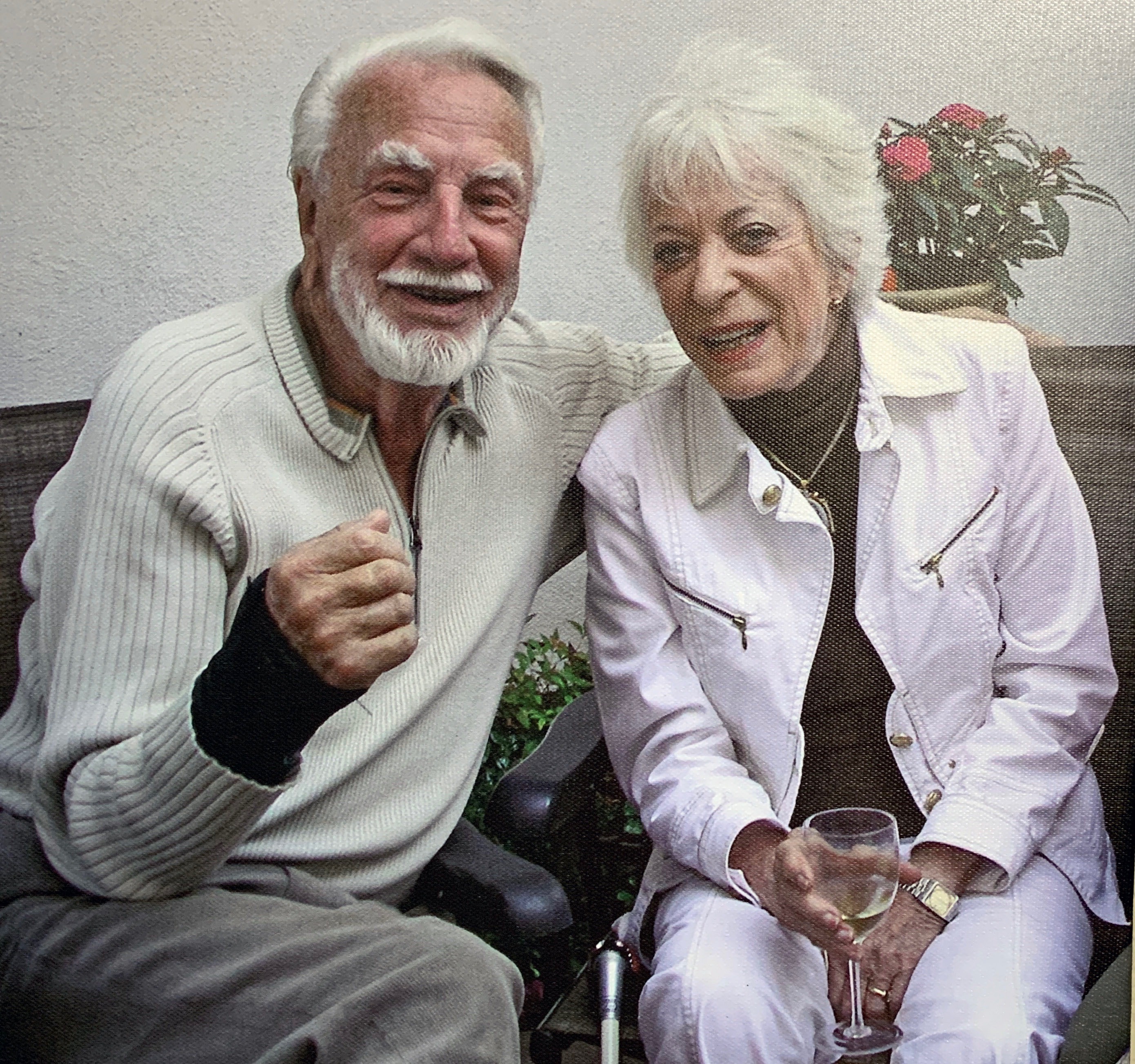 CoastLines: Comedy, Family and a Lifelong Love of Laughter

Lola Gillebaard likes to tell this story about the day she caught her four sons in the bathroom, competing to see which boy could stream the farthest.

If this seems a rather racy joke for mixed company, understand that Lola Gillebaard is 89 and was doing stand-up comedy in an Aug. 30 senior citizen talent show at San Clemente Villas, the assisted-living community where she resides.

What some in the audience likely didn’t know is that Lola and her husband, Hank, who died in 2017, had been, for 63 years, a laugh-a-minute household. A pair of crack-ups. Expanding on that, Lola took a comedy class in 1975, parlayed it into a career as a humor-laced motivational speaker, then took up stand-up comedy.

She once opened for Dana Carvey, once for Bill Cosby. She appeared in a spoof troupe, Funniest Housewives of Orange County. She won a 2011 “Funniest Female in California” competition. She published a book, Laughter: Made from Experience.

Hank didn’t do stand-up, Lola told me in 2017, “but he could say some of the funniest things of your life, and he did great impressions.”

I met Lola in 2017 to interview Hank for the Orange County Register about the never-say-die, roller coaster life he’d led after being born in America and raised, from age 2, in Holland. War broke out, Nazi occupation forcing him into hiding at age 15. Taking risk after risk, he improbably eluded capture—or worse.

His life in postwar Germany, then in America, was a succession of how-did-he-do-that escapades, all recounted in his life story published in 2015, Private Lucky: One Man’s Unconventional Journey from the Horrors of Nazi Occupation to the Fulfillment of a High-Flying American Dream.

In 2017, I read the book, one improbable escapade after another. I’d never read anything like it. I couldn’t wait to meet Hank.

I’d never get the chance.

Three days before we were to meet, Lola was set to do stand-up comedy in a Sunrise Rotary fundraising show at Casino San Clemente. Hank would be in the audience.

Hours earlier, Hank suffered a stroke, gave Lola a kiss and departed this life at age 90.

After his passing, Lola was ever eager to honor Hank’s memory by sharing his happy-go-lucky life story with me. She said he’d so been looking forward to our interview.

So we met. We put together a story, published about 10 days after his death.

Lola has kept in touch. She still exudes that zest for laughter, knows how to work an audience. For her 89th birthday, 14 partiers joined her, posing for a group picture, wearing clown noses.

She recently sent me a link to a YouTube video of her at the talent show. She informed me there was lots of other talent there, wondered if I might like to showcase some of it.

I had just published a column inviting column ideas. I told her it’d be better to actually attend the show, then write my impressions. But her video, by itself, made me laugh out loud, so I decided it would be a great excuse to revisit the Gillebaards’ amazing life story and share it with a new audience, SC Times.

In 1929, Hank’s Dutch parents decided to raise their American-born son in Holland as a native Dutch speaker. Then Germany invaded, occupying Holland.

School classmates nastily accused Hendrik of being Jewish—which he wasn’t. He was reported to the Nazis.

A family friend spotted the boy being hauled away and rescued him from going to detention camp, proclaiming that he was wanted for a crime, was sought by the police.

After that close call, Hendrik left home, realizing that even if the Nazis didn’t come looking for him again, all Dutch boys had to enlist in German service at 16, which would again put him at risk.

So he went into hiding for two years, rarely knowing where he would sleep any night, living in barns, with the resistance. One night, he survived by ducking under icy waters in a canal to elude a patrol boat.

At war’s end, Hank’s father arranged for him to join U.S. forces. The Army assigned him to U.S.-occupied Germany, with one problem: No one would believe he was really American. He couldn’t speak English.

But he was resourceful, a quick learner. Denied boarding onto a military train, he leaped onto the moving train, between coaches, hanging precariously, arriving exhausted and grimy, having to explain himself.

It was an early instance of what would become a lifelong talent for bluffing his way into improbable opportunities. He scored a job in aircraft maintenance, then talked flight crews into taking him aloft. Little by little, he realized a dream, learning, somewhat, how to fly an airplane.

His misadventures in Germany—and the good fortune that seemed to follow him everywhere— could fill a book, even if it ended there.

But there’s more. Arriving in America near-penniless, working wherever he could, he purchased a second-hand airplane, flying it unlicensed, crashing it in Pennsylvania, where Amish farmers welcomed this stranger who curiously was able to address them in German.

After a succession of missteps elsewhere, each one ultimately working out, he got licensed, became a crop duster, survived a second crash and ended up talking his way into a gig as a multilingual U.S. government air instructor, teaching overseas military who were training in America to be NATO pilots.

Notorious for showing off his aerial acrobatics on base, Hank became known as “The Crazy Dutchman.”

Putting to use his role-playing instincts, he joined a community theater group. He met Lola in a production. They shared some laughs. The rest is history.

When he reached his 80s, the family sat Hank down with family friend Melissa Guzzetta to record interviews, document memories and produce a family memoir.

After hearing so many head-turning misadventures, Guzzetta told the family this story needed to be shared. She wrote the book.

It actually would make for a rollicking, funny, riveting, inspiring movie. If there’s a screenwriter who would like to take on the challenge, Lola can be reached at San Clemente Villas.

The book is available in paperback and Kindle editions. An audio version is coming.

In 2018, Lola was back, delivering one-liners at the Casino to a Rotary talent show audience she hadn’t been able to entertain the previous year

Life’s a Beach: A Numbers Game