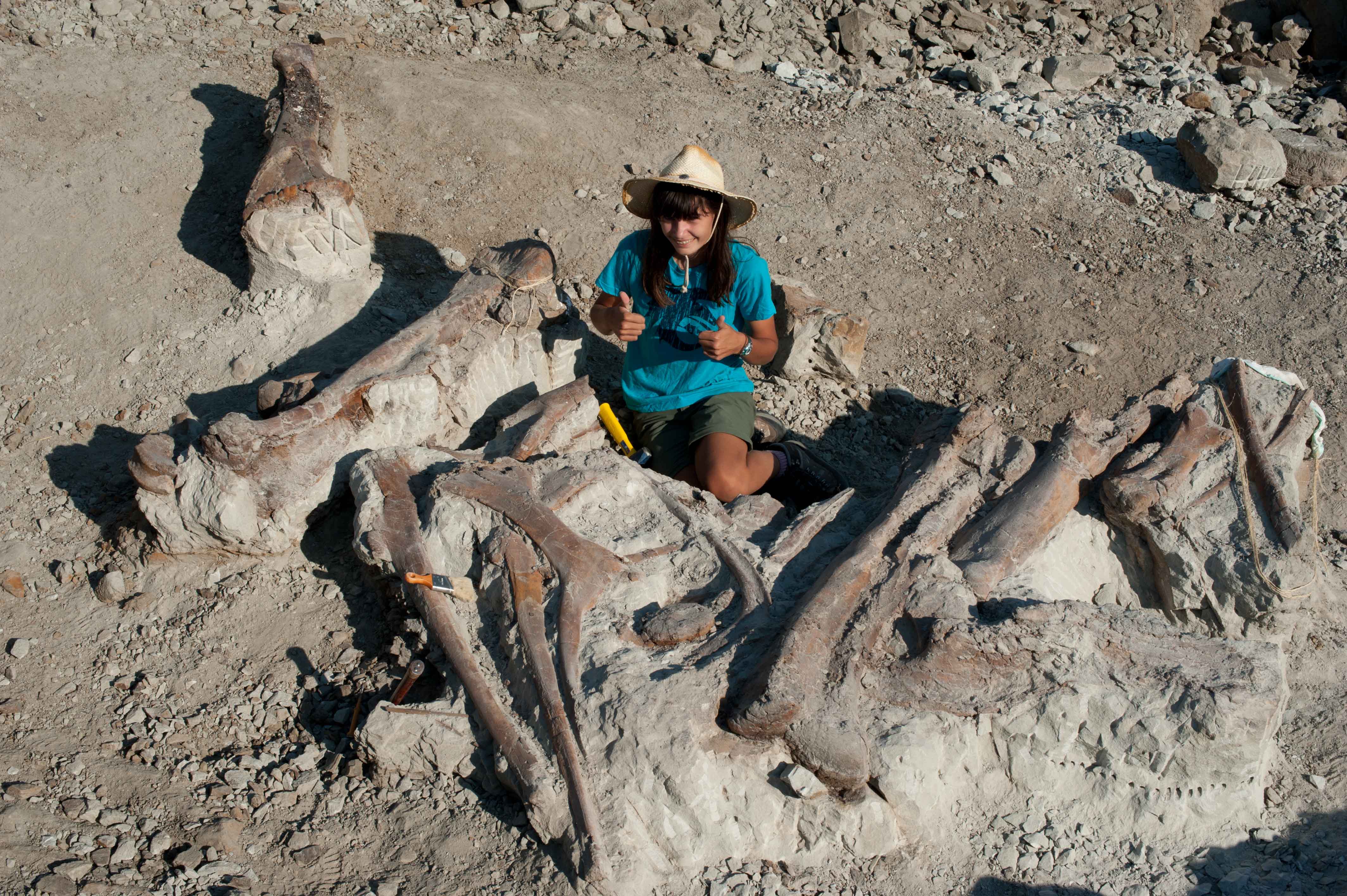 CoastLines: ‘Dinogirl’ Makes Her Mark in the World of Paleontology

When she was 12 and on a visit to a fossil-rich dig site in the Badlands of Montana, Clarissa Koos so impressed a University of Washington paleontologist there that he named a dinosaur after her.

“Clarissa” is the second-largest Edmontosaurus ever found.

It took time for paleontologists to determine what species “Clarissa” was. If it had turned out to be a new species, the Koos family confided, it would have been the Clarissasaurus.

Scientists determined that this was a plant-eating Edmontosaurus, 40 feet long and weighing two tons when it lived some 66 million years ago. Today, it’s part of the collection at The Burke Museum of Natural History and Culture in Seattle.

As for the human Clarissa, she graduated from San Clemente High School in June. You could say that her horizons have grown by Jurassic proportions over the past seven years.

With support from her parents, Liz and Chuck Koos, Clarissa took time every summer from 2012 to 2018 to visit dig sites, observing paleontologists in action and assisting them. This included recoveries of a Triceratops and a Tyrannosaurus Rex.

“It’s been just a crazy, exciting adventure that has been so much fun to be on,” Liz Koos said. “We’ve learned about things we never expected to learn about.”

It all started when Clarissa’s paleo curiosity led her to participate in the Natural History Museum of Los Angeles County’s Dino Camp for three summers. In 2012, she visited the museum’s dig site in Utah.

The next year, the Koos family, vacationing at Yellowstone National Park, took a side trip to Montana. Paleontologists had invited them to explore a remote dig site, Hell Creek, that would yield Clarissa the dinosaur.

The rest is, well, history. Clarissa Koos soon found herself the protagonist in a children’s book, Dinogirl, designed to inspire students. Written by a Massachusetts school teacher, it recounts how Clarissa helped unearth her namesake’s fossil remains.

“I actually found a dinosaur in one of my seasons,” Clarissa said. “It was a small Triceratops . . . maybe 10 feet long, maybe 5 to 6 feet tall. The horn was 3 feet long. (The fossil) wasn’t very complete, but was my first discovery, so it was exciting.”

Through her middle school and high school years, Clarissa has attended events and met with lecturers at the Natural History Museum of Los Angeles County and at The Burke Museum. She has volunteered at The Burke’s annual Dino Days, sharing her passion for paleontology with visitors. She has taken university-level courses in scientific illustration from Cal State Monterey Bay.

She has stayed home, because the Koos family is busy selling their San Clemente house to move to Montana and be closer to Clarissa as she enrolls at Montana State University—majoring in paleontology, of course. It may also lead to a paleontology Master’s degree and a graduate certificate in scientific illustration.

San Clemente residents who visit Casa Romantica Cultural Center and Gardens may already have seen some of Clarissa’s artwork. She has won awards in the Casa’s annual student art exhibit. This year, her pen and ink drawing of a lemur—created from thousands of tiny dots— earned second place.

Her sketches appeared in Dinogirl, including the cover. But author Denise Porcello has since updated the cover to showcase the smiling face of “Dinogirl” herself.

Clarissa’s artwork has come a long way since those early Dinogirl sketches, and she says it’s possible she could, with further studies, turn professional with her art. “There’s this one artist, Terryl Whitlatch—she worked on the creature design for Star Wars— but then she also does paleo art,” Clarissa said. “She’s my main role model for art.”

Working with major studios, Whitlatch describes herself on her website as “a professional Creature designer specializing in Animal Anatomy, Paleontological Reconstruction, and the creation of Imaginary Creatures for the Animation, Publishing, Institutional, Academic, and other Transmedia/Entertainment Industries.”

In the paleo field, Clarissa’s reputation as “Dinogirl” has grown with her. “I’ve met paleontologists who knew my story, and I didn’t know them,” she said. “(One) went, ‘Oh, you’re that Dinogirl!’ ”