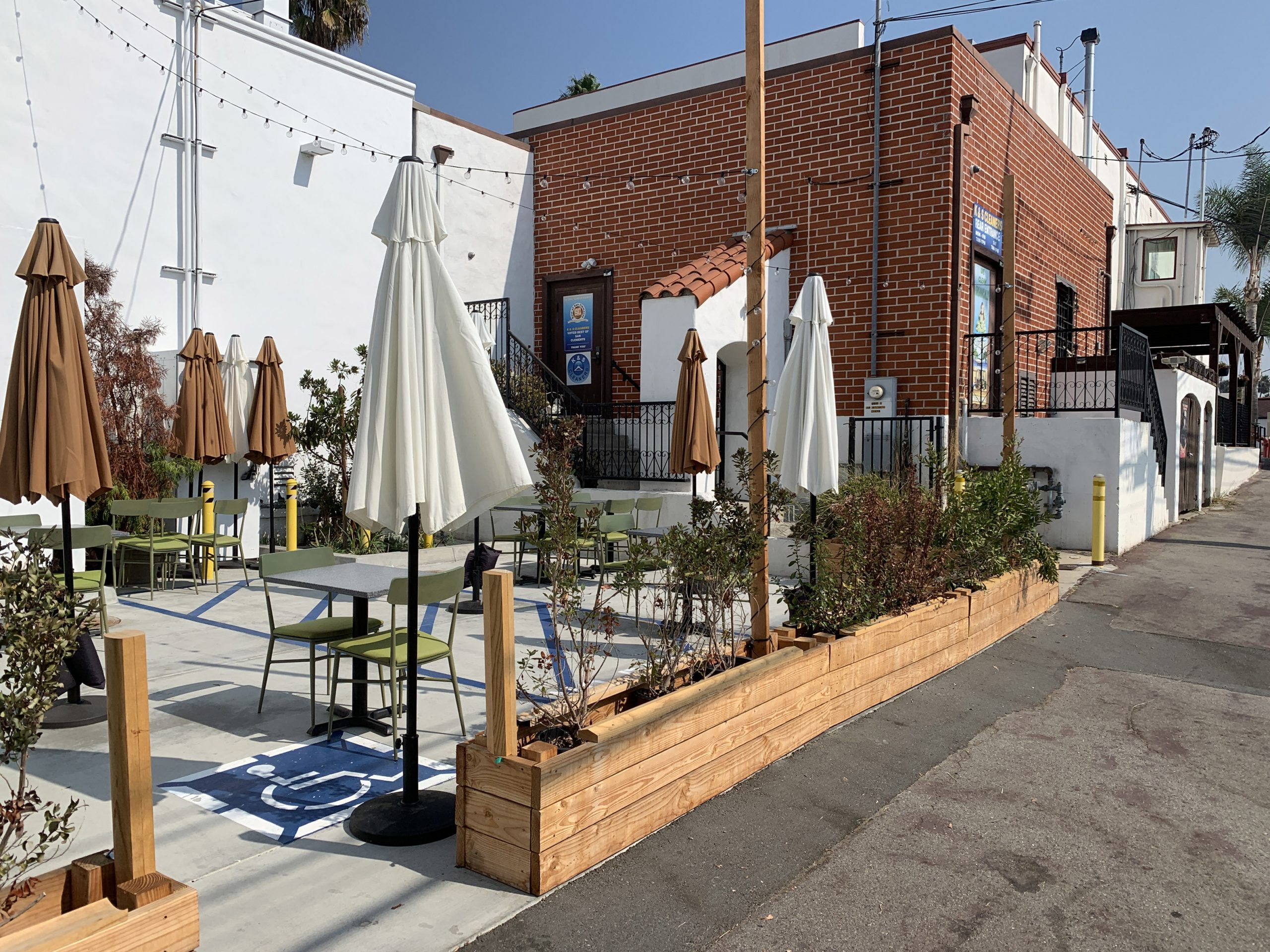 Of all the outdoor seating galleries that have sprung up around town this year to help San Clemente restaurants cope with coronavirus restrictions, one is more interesting than any other.

It’s located in an alley behind an El Camino Real restaurant, Tamarindo. It instantly turns the alley into a more interesting pedestrian paseo.

Since 2002, San Clemente’s elected leaders have made repeated efforts to decorate and enhance two downtown alley segments, designated as paseos.

You may remember the first effort—beach-themed alley decorations that became something of a comical curiosity. Most of the decorations have long since been dismantled.

In 2016, the city council adopted a Paseo Master Plan that received an award in 2017 from the American Planning Association.

The plan proposes public improvements to dress up downtown alleys, make them safer and more attractive to pedestrians and encourage businesses to privately create facade improvements.

The outdoor seating gallery behind Tamarindo may give you a hint of what could be done to enliven the alleys.

Nearby, an outdoor patio behind an El Camino Real coffee house, Sur Coffee, is built into that building, fronting on the alley. It provides seating for the coffee house’s coffee bar and a more elaborate way of improving how that alley used to look.

The recently set-up seating gallery behind Tamarindo is landscaped and includes decorative lighting. It also takes up three parking spaces, including a handicapped one.

If outdoor dining there were to be made permanent—or outdoor seating elsewhere downtown where parking spaces are presently being sacrificed for restaurant seating—there would need to be an understanding over how to handle downtown parking needs.

For now, the city is allowing outdoor dining areas to temporarily occupy parking spaces and parking lots as a coronavirus safety precaution.

The Paseo Master Plan could provide more back-alley opportunities downtown. The paseo plan identifies two sets of alleys for public improvements and for private facade enhancements that could be eligible for grants.

Once SDG&E tears up alleys to yank out power poles and bury utility lines, the alleys can be repaved with decorative surface treatments, nicer lighting, landscaping, public art and incentives for private businesses to enhance building frontages facing the alleys.

The city’s original efforts to dress up the alleys date back to 2002, when the city created a two-block Alley Walk, north and south of Del Mar.

You may be apt to smirk if you remember the illustrious paseos that the city council spent $104,000 to establish along one-way alleys between Del Mar, Avenida Granada and Avenida Cabrillo.

Decorations along the paseos were designed to look like a colorful beach scene—brown pavement, surrounded by white walls decorated with various bright colors of metallic fish, palm trees, umbrellas and surfboards.

It was a nice try, but the Alley Walk struck many as an oddly dressed-up alley. It generated jokes and smirks.

“Paseo, my aseo!” a Sun Post News reader wrote in response to a news article that introduced the colorful decorations.

Sadly, the brown pavement was more the color of mud or fecal matter than an attractive sandy beach. And it wasn’t long until the brown became stained, patched, scrawled up with utility markings or otherwise desecrated with wear and tear.

Occasionally, suspicious-looking liquid runoff from the rear of one or another business would leak a squiggly path across the brown “beach.” Then the liquid would dry, leaving a mystery residue.

Face it, you could doll up an alley and call it a paseo, but you couldn’t hide that our fake beach was still an alley.

Someone chained a bicycle to one of the metallic palm trees, whereupon the city slapped an eviction notice on the bicycle.

Over time, the city removed most of the metallic decorations, citing repeated vandalism or concerns about sharp edges.

All that remain are some vines and a school of fish. If you look closely, you can discern traces of our brown “beach.” Can you find a brown patch big enough to plop down a beach towel?

Overhead decorative lights that had been strung from side to side in zigzag patterns were removed. They proved too costly to maintain, struck by trucks with tall loads, leaving the lights drooping in disarray or falling onto the pavement.

Does anyone remember the year one of San Clemente High School’s homecoming parade floats got hung up in the paseo lights?

The city did succeed in screening businesses’ rear-door garbage cans from lining the paseos, requiring owners to either build trash enclosures or help fund a large collective enclosure that borders Avenida Granada.

And now there is a grand opportunity for a rebirth, with eventual rollout of the Paseo Master Plan.