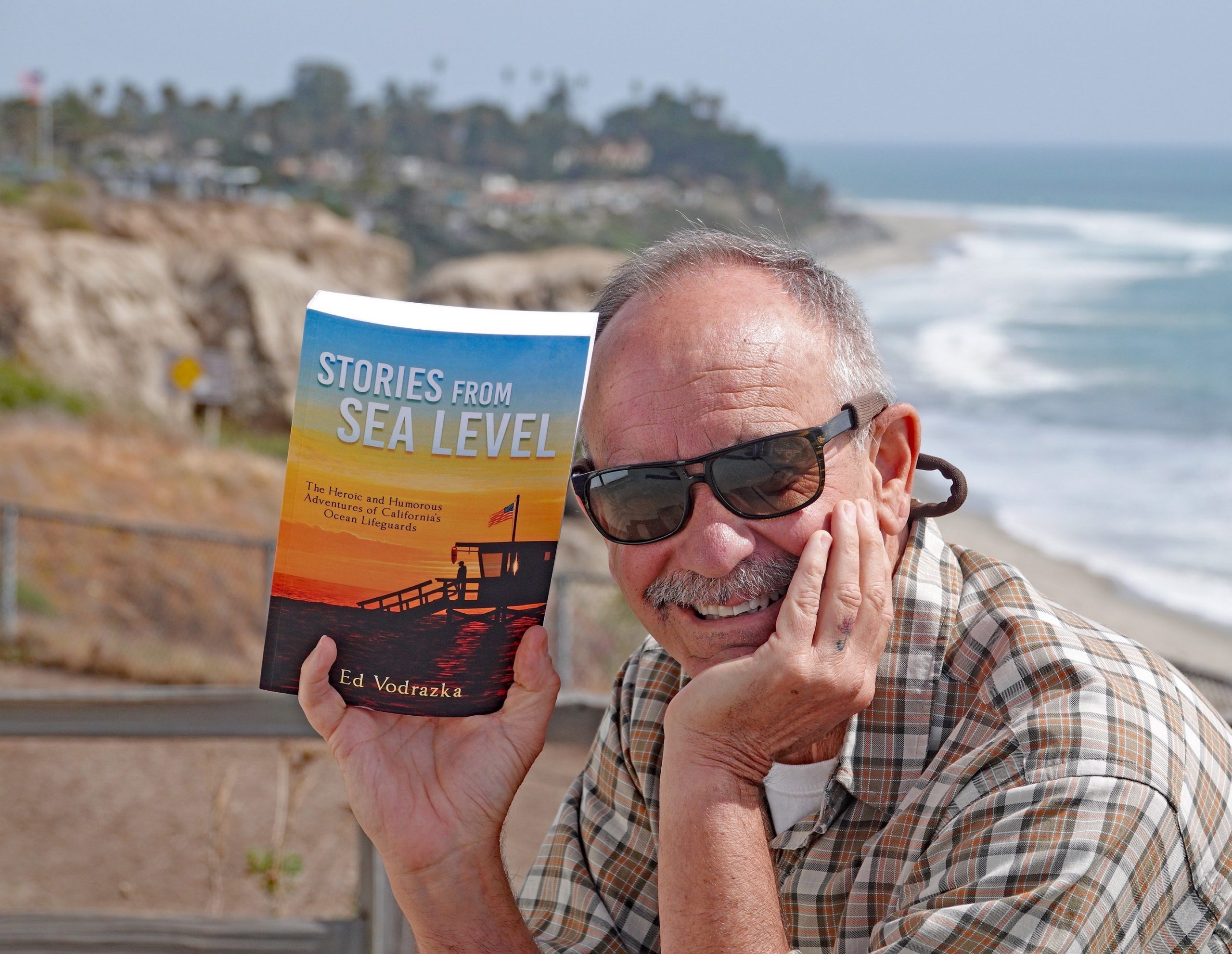 Some of San Clemente’s most fascinating storytellers are state and city lifeguards, as I can attest to from more than 50 years of journalism.

Some of the younger lifeguards who work summers have gone off on remarkable off-season odysseys.

Few can match the adventures of Ed Vodrazka.

I profiled him several times during his tenure at San Clemente, Doheny and San Onofre State Beaches from 1977 to 2002, including his work here, his off-season travels and winter stormwater rescue experiences along the notorious Sonoma Coast.

I lost track of him after 2002, only recently discovering what he’s done since then, broadening his career horizons. He’s still very much active today, based at Torrey Pines.

I purchased it, trusting that the 39 tales on 374 pages would fully live up to Vodrazka’s audacious book title. They do. And to my surprise, none of the heroics and the mind-blowing waterman feats is about the author.

“It seems a little self-serving to write stories about yourself,” he told me, as we met at San Clemente State Beach for the first time in decades.

“They’re funny ones,” he said. “I didn’t want to put my rescue stories in there or my medicals, nothing I did that I felt was really dramatic. I wanted to kind of honor these other lifeguards who really stepped up. Many of these stories are some of the best I’ve ever heard. For some of them, I was on scene.”

Five stories recounted in the book are at San Clemente and San Onofre State Beach. A sixth showcases our town’s namesake, San Clemente Island. All these stories carried surprise punchlines.

Vodrazka is the self-deprecating protagonist in two off-beat tales. One involves his talent for imitating a police K9’s bark, over a vehicle’s P.A. speaker, along a trail at Trestles. Park rangers were trying to root out a fleeing suspect hiding in thick, thorny bushes.

The other odd tale was atop a large table rock at Torrey Pines. Onlookers had summoned Vodrazka, beseeching the lifeguard to safely corral and free a moray eel trapped in a shallow seawater pool on the rock. Yikes!

One chapter informed me, I’d never realized, that tower lifeguards at San Clemente State Beach would routinely, upon hearing an approaching train, turn their eyes momentarily away from the ocean to see if any pedestrians were in danger, alerting them to stay clear of the train.

The story that mentions that practice involves a tragic death of a young man who evidently misjudged how close he was to a train while trying to impress two of his friends. That story had an almost psychic, unexpected aftermath.

Some names that pop up in the book may be familiar to San Clemente beachgoers—names I remembered writing about.

One that surprised me was surfing great Phil Edwards. Another was a man I’d written about frequently in 1970s’ San Clemente: Richard M. Nixon.

Emotions evoked from one chapter to the next ranged from tears to belly laughs, to survival disbelief or to rare, overwhelming gasps when lifeguards got to meet and bond with a near-death survivor.

“Ninety-nine percent of the time, on a critical rescue,” Vodrazka told me, “you don’t find out the outcome.”

Why write the book?

“I want these lifeguards, who do these amazing things, to be recognized,” Vodrazka said.  “I want the public to know what we do as lifeguards. In the course of an eight-hour day, usually something happens. You treat some kind of a medical or make a series of rescues. Here in San Clemente, the locals are really ocean-oriented. They understand. I remember many times people cheering when you come out of the water after a big rescue. That’s incredibly gratifying to a lifeguard.”

— Lived in his parked Chevy van at San Clemente State Beach, as did other adventuresome lifeguards early in his career.

— Hiked into remote South Pacific mountains in search of primitive people, spending two weeks with them.

— Trekked in Nepal, the Himalaya region with an 18,000-foot mountain pass.

— “I’m the only lifeguard I know that did CPR on a dolphin,” he said. That may appear in a future book.

— With LA County, his duties included lifeguarding Malibu and Zuma, also Catalina Island, where a former San Clemente JG he had taught—Rob Pelkey—is a lifeguard captain.

We were like Bohemians. I was in a van. We’d surf in the mornings, work all day, surf in the evening. If there was no surf, we’d go diving, shoot some fish and have a big fish fry at night. We had a good time.

We were such a tight group of friends. San Clemente’s population was small. You couldn’t drive from one end to the other in town without waving three or four times to cars coming the opposite way. We all knew each other by our cars. Those were magical years.