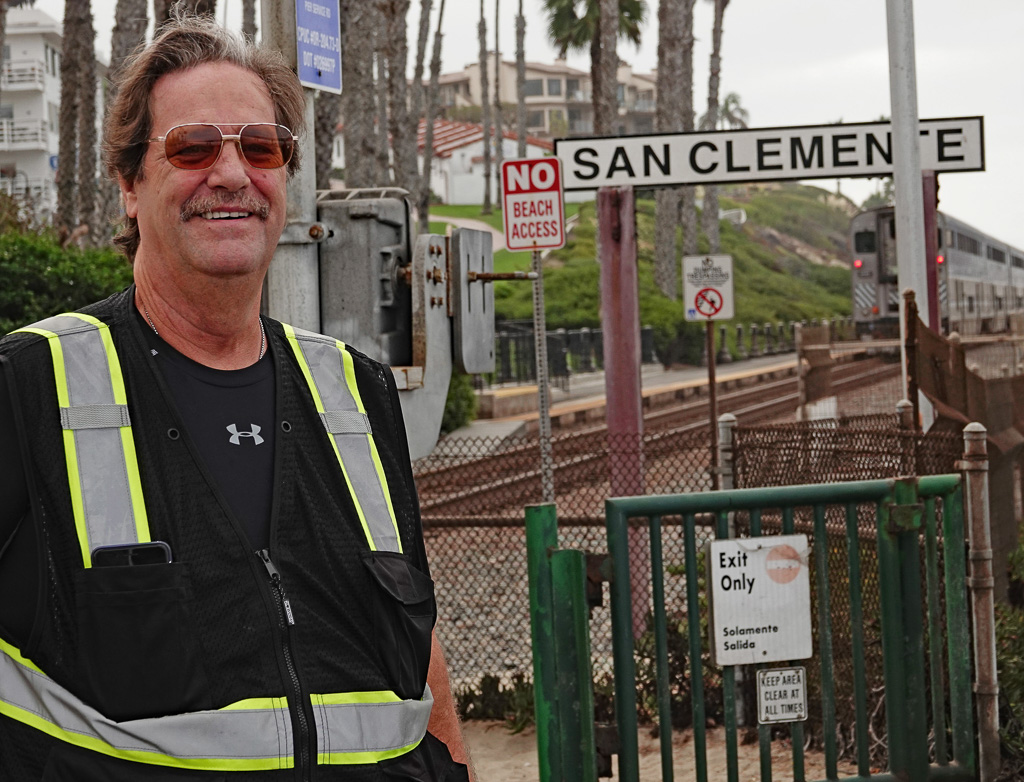 Editor’s note: This column will appear in the Nov. 21-28 edition of the San Clemente Times this week.

If you spot 280-pound Mycle Brandy walking the beach trail with his cane in coming weeks, you may wonder, “Isn’t be supposed to be walking across America?”

It turns out that a succession of wildfires in Wyoming aborted the 67-year-old San Clemente resident’s trek after he had walked more than 300 miles hampered by one encounter with smoke after another.

At first, medication prescribed by a doctor helped him continue. Then a third wildfire, a third doctor visit, delays related to his support vehicle and the onset of snow sent Brandy home with permanent damage to his right lung, compounded by pneumonia.

Home now, the four-time stroke survivor isn’t giving up, having walked three different routes across the American landscape since 2010 visiting hospitals, intent on inspiring stroke victims to get off the couch.

Brandy is already mapping out an alternate route he hopes to launch in late March. Advised not to put his lungs through a trek into brutally cold weather this winter, he plans to recuperate in San Clemente, train in mild weather here and pursue a relatively flat route from home in the spring, walking southwestern deserts into Texas and points east as the weather heats up.

“The doctor said if I can avoid cold air, I should be okay,” he said.

Brandy made news in 2010 by walking 2,940 miles across the country, dipping his toes into Upper Newport Bay for starters, then ending in Washington, D.C. eight months later with a toe dip into the Potomac River.

He later walked up the west coast from San Diego to Seattle, 1,450 miles, then east coast from Maine to Miami, 2,100 miles. On each walk, he visited hospitals, did news interviews, spread messages of hope and was joined along the way, for short distances, by inspired stroke patients.

Efforts to complete a fourth cross-country trek have fizzled three times from circumstances beyond his control. In 2014 and 2016, volunteer drivers of Brandy’s support RV had to return home due to emergencies, effectively canceling the walk he tried to restart in Wyoming this year.

This time, Brandy and volunteer driver Sharon Tapp set out in September, well ahead of cold weather, only to be deluged and delayed repeatedly by smoke. Then, Brandy said, Tapp learned that her husband had a serious accident. They drove the RV to Denver, put her on a plane home to Arkansas, and Brandy asked if NolaKay Erman, a 2010 support driver from Ohio, could step in.

She offered to, so Brandy and his wife Louise flew Erman to Denver, still hopeful of completing the planned 2018 trek even with Brandy’s impaired lung. He and Erman drove to Wyoming. But when snow set in, Brandy’s health wasn’t up to it. Erman drove him and the RV home to San Clemente.

Brandy said he is confident he can complete a fourth walk across America. He rejected the notion of just driving the RV cross country visiting hospitals. Walking the walk is what inspires, he said, and he can surely do it, three miles at a time, take a break, another three miles, take a break, and so on.

And it’s not just about inspiring stroke patients, encouraging them to walk out to the mailbox tomorrow, then walk past the mailbox the next day.

“It’s seeing the country a different way than when you drive,” Brandy said. “It’s having camaraderie with the truckers. Once I get on the news, people start waving at me, cars honking. I’ve seen a lot of beauty. It’s hard giving up.”