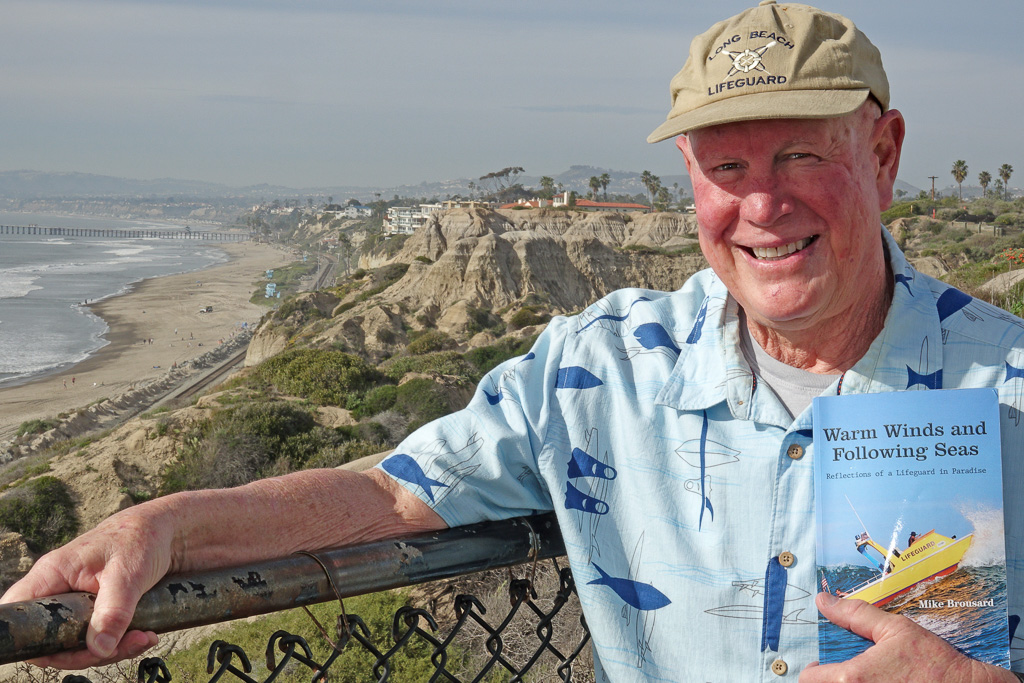 If you’re a beach lover, you may find that your best read of 2019 won’t have been penned by a bestselling novelist, superstar athlete or political pundit.

San Clemente resident Mike Brousard, who lifeguarded for five decades, has compiled a captivating memoir that will change the way you view lifeguarding.

You may be in for some surprises: morsels you may not have known about our local beaches San Onofre, San Clemente and Doheny, as well as those on up the coast.

You’ll experience lifeguarding through the eyes of a trial-and-error rookie, a skilled, risk-taking boat operator, a sage supervisor, a law enforcement officer, a lifesaving hero bestowed with emotive thanks by a grateful family on the beach, a life-risking hero who on another day watches a should-be-grateful family walk away without a word of thanks.

You’ll experience the anguish of being unable to save a life, sometimes under impossible circumstances.

Warm Winds and Following Seas: Reflections of a Lifeguard in Paradise tells how Brousard grew up in Long Beach and passed a grueling, cold-water test to win what he thought would be a dream job as a summer lifeguard with state parks in Huntington Beach.

Instead, he found himself “banished to Siberia,” as he put it—assigned to the far less glamorous shores of San Clemente and Doheny State Beaches in his rookie season, 1970.

That dubious circumstance launched a lifelong love for our area, its beach culture and the people Brousard met during a career protecting lives at San Onofre, San Clemente and Doheny, together with stints in Huntington Beach and Long Beach.

You’ll learn the stark differences between lifeguard culture in Huntington Beach and San Clemente, how lifeguarding in Long Beach can mean risking your hide on land, not just in the water, and how lifeguards faced scorn from surfers while trying to do their jobs when Trestles and San Onofre opened as state beaches.

You’ll meet colorful characters such as iconic, eccentric Doheny lifeguard Pop Proctor and legendary Dana Point waterman Lorrin Harrison. You’ll feel the pain of harrowing cold-water rescues off treacherous Capo Reef, including a critical one involving Harrison’s outrigger canoe on a day he never should have ventured out.

The book is a virtual history of California lifeguarding, beginning in 1905, when beach resorts flourished at Santa Monica, Venice, Long Beach and San Diego. As uninitiated thousands flocked to those beaches, drownings mounted. Negative publicity alarmed the moguls who owned and promoted the resorts.

Brousard researched books and news archives of the period to trace how volunteer and paid lifeguard services evolved—painfully, by trial and error—and how Hawaiian wunderkind George Freeth burst upon the scene. He put on dazzling surfing exhibitions, trained lifeguards and personally performed lifesaving miracles. The descriptions are gripping.

It wasn’t until 1950 that the state established its own lifeguard service, at Huntington Beach, founded by Bob Isenor, a stern, colorful character who lived in San Clemente in a house overlooking Calafia Beach.

Veteran lifeguards could strike fear into rookies like Brousard, warning them that Isenor would go home for lunch, had a rescue tube handy, and if he saw a rescue developing and the tower guard wasn’t quick enough, “just don’t let him beat you to the rescue.”

You’ll learn how Doheny and San Clemente State Beaches were donated to the state by the Doheny family and by Ole Hanson’s financier, Hamilton Cotton, in 1931, and how President Nixon opened up San Onofre and Trestles in the 1970s.

Veteran lifeguard Nick Sopha describes how President Nixon one day was strolling the sands at Cotton’s Point, waving to someone up on the bluff when a powerful shorebreak knocked him over. He struggled to regain his feet.

“Sopha said he jumped out of the Jeep,” the book says, “and began to run down but was waved off by Secret Service agents, who came to Nixon’s aid.”

Intense descriptions of how a boat operator must position the craft in the surf zone, so a lifeguard can leap from the stern and onto the face of a rising wave to perform a rescue seamlessly, the boat operator then throttling up, performing a dance to evade other oncoming waves in scary-big surf, can make for summer reading at its best.

Fred Swegles is a longtime San Clemente resident with more than 48 years of reporting experience in the city.

Letter to the Editor: Official Letter of Support for Pat Bates