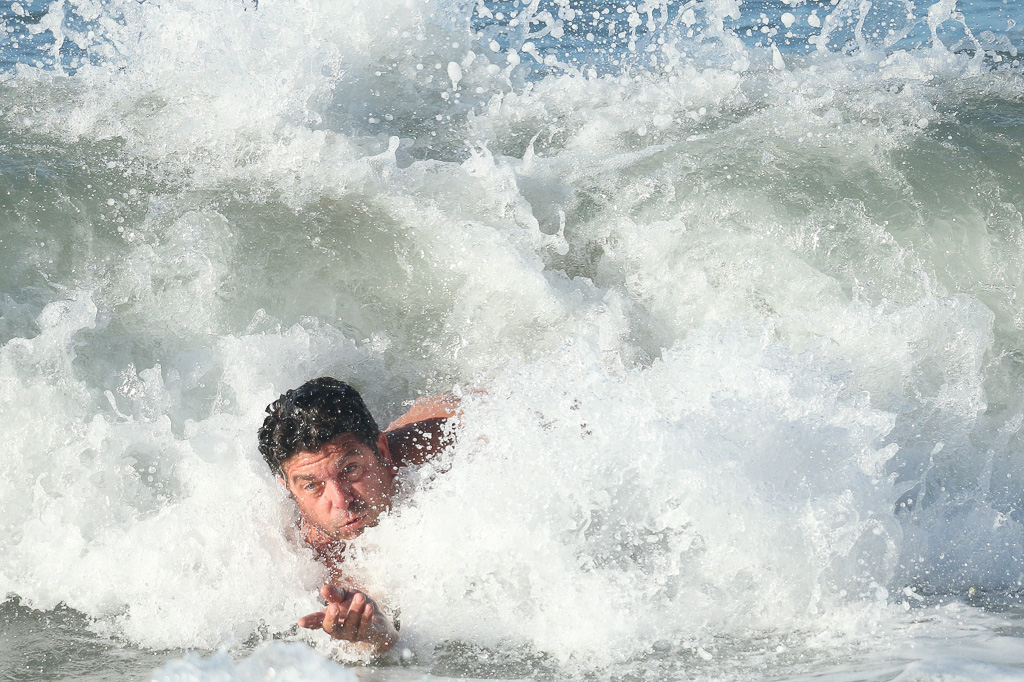 The Toledo Blade cheerfully reported on Jan. 1 how revelers happily greeted 2019 with a Polar Bear Plunge into the 38-degree waters of the Maumee River.

In Pittsburgh, KDKA News documented a New Year’s Day plunge into the 40-degree waters of the Monongahela River, noting how the previous year organizers had to break up the ice so daredevils could go in.

Meanwhile, in Wisconsin, the Milwaukee Journal Sentinel said hundreds showed up at Bradford Beach on Lake Michigan.
“It wasn’t as chilly as some past plunges, with the temperature hovering around 25 degrees,” the newspaper reported.

And back in sunny Southern California?

The Orange County Register reported there was no official Surf City Splash in Huntington Beach this year.

“The event, which draws anywhere from 500 to 1,000 people, was called off early Tuesday morning due to the weather,” OC Register’s Laylan Connelly reported.

It surely looked like a sunny day in Surf City USA. But there were 15- to 20-mile-per-hour winds, a lifeguard told the newspaper. He said about 30 people entered the 56-degree water at midday anyway, unofficially.

Judging from the photos, the winds appeared to have eased, the surf didn’t look ferocious, the sea surface looked fairly smooth, and the out-on-their-own Surf City Splashers all appeared to have survived. Many wore exuberant smiles.

I wondered if San Clemente’s own 2019 Polar Bear Dip likewise was ditched due to weather.

I didn’t make it down there, so I made some inquiries. Thankfully, the Lasuen Beach tradition did live on.

Most people who show up Jan. 1 at Lasuen take a quick dip close to shore, but a hardy few endure a half-mile swim out to Seal Rock, a half-mile back.

It’s called “Swim the Rock.” Shawn O’Gorman, a Swim-the-Rock veteran, swam it in 2018 but informed me he couldn’t this year. But he was there to watch three others Swim the Rock.

Lifeguards and former lifeguards started doing it on New Year’s around 1980. Families and others showed up to support them and to take a more modest dip.

For many years, I covered the event, photographing the quickie dippers and the hardcore distance swimmers arriving from The Rock. Some years, after completing interviews, I would strip down to my boardshorts and jump in—the last guy in.

I would try to stay in for 10 minutes, out there by myself, and bodysurf a few waves. I would be last one up the trail to Calle De Los Alamos.

Recently, I’ve attended some years, but not others. I’ve never Swum the Rock.

My hat is off to those who do. We may not be Alaska, but the length of swim compensates.
My favorite Jan. 1 news clip, among the ones I researched online, was NewsCenter Maine’s account of the 11th annual Polar Bear Dip & Dash at Portland, Maine.

The event, a fundraiser to, of all things, curb climate change, drew about 250 people on a 40-degree day. Revelers sounded pretty happy it was that nice. The camera crew asked dippers how it felt as they emerged from the Atlantic.

I’m not sure what that means. It sounds pretty gnarly.

I wonder what that kid would say if told that California canceled its Surf City Splash.