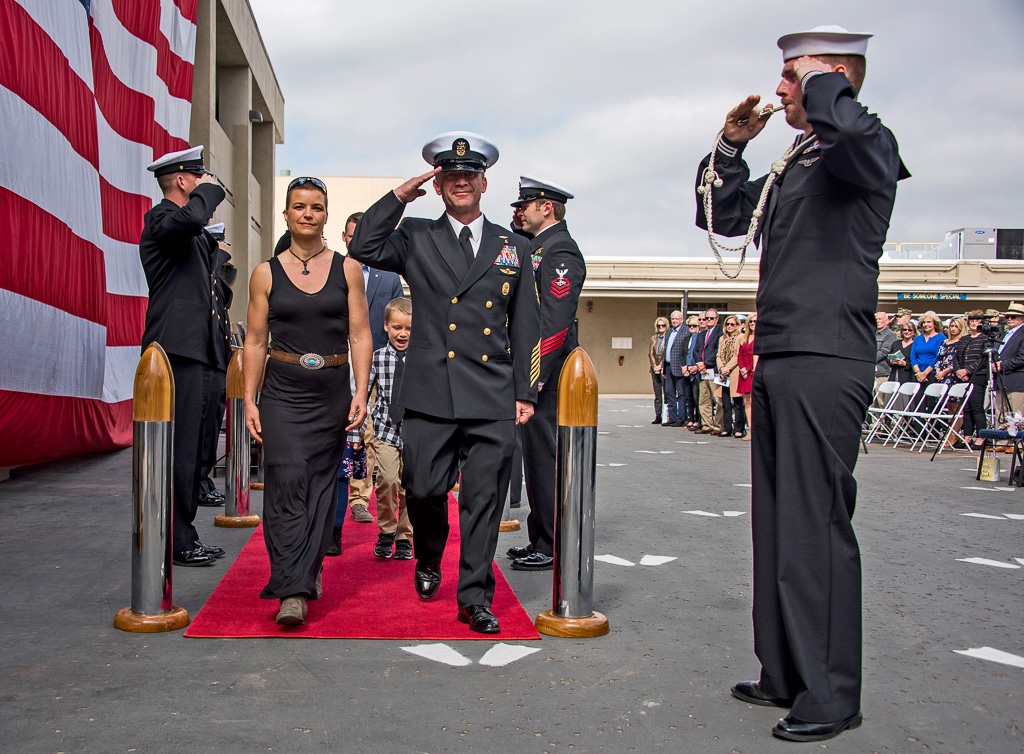 After more than 30 years of arduous training, conditioning and risking his life around the world as a member of elite Naval Special Warfare teams, Jason Gardner is home to stay—a decorated Navy SEAL, veteran of what he calls the “pain train.”

“It’s one of those colloquialisms,” he said. “Anytime stuff gets real bad, guys will just look at each other and say, ‘Well, we’re on the pain train now.’ ”

Gardner is a 1987 graduate of Dana Hills High who grew up in San Clemente. He retired March 1 as a Navy command master chief. A ceremony in San Diego saluted him as among the most elite of the elite.

He is reunited now, for good, with his wife, Iris, and their children, Storm, 8, and Thor, 6, pursuing civilian life in Washington state. Also at his side, witnessing his retirement fete and hearing his speech, was son Chase, 23, from a prior marriage.

We asked Gardner about the sacrifices it takes to belong to Navy Sea, Air & Land teams and how he endured three decades of engagements in places such as Iraq, Somalia and Afghanistan.

San Clemente Times (SCT): Your dad was a career Marine. Why join the Navy?

Jason Gardner (JG): I thought about joining the Marines, and my dad talked me out of it. I wanted to be in Special Ops.

SCT: You attended SCHS, but your parents transferred you to Dana Hills. Why?

JG: I was a lot to handle, growing up. I was just causing too much trouble. A different environment—that was what I needed. It worked out great.

SCT: Did three summers as a San Clemente lifeguard influence your career path?

JG: I pretty much decided what I was going to do around my 16th birthday. I swam and played water polo. The SEAL teams are basically the premier maritime special operations force. It’s all about being in the water and close to the ocean. It really married up with where my interests lay.

SCT: So the skillset helped you be a Navy SEAL?

JG: The fact that I was comfortable being a lifeguard, in big surf and the ocean, paid dividends across most of my career until we started fighting wars in the desert.

SCT: How hard is it to become a SEAL?

SCT: What did you do as a young Navy frogman in Iraq?

JG: The first Gulf War, we boarded a couple of tankers that were smuggling oil. There were no issues in those situations. A lot of the operations that we were tasked with, it turned out that the Iraqis surrendered and/or abandoned the targets, so we did rehearsals but never did the big operations.

SCT: Your deployment in Somalia?

JG: Nineteen ninety-five, as a sniper. We were there to pull the UN out of Somalia, two years after the Black Hawk downing. I was in one significant firefight there. I engaged several individuals with a 50-cal (caliber) sniper rifle at ranges of 500 to 700 yards.

SCT: What was your most harrowing experience?

JG: In 2009, I deployed to Afghanistan. It was just eight months of extended fighting. The firefights in Somalia lasted like 5-10 minutes, and then they’d stop. In Afghanistan, we were in one firefight that lasted four days. My task unit had over 300 hours on that deployment of what we call ‘troops in contact.’ That’s when you’re in a firefight. It was spread across 23 different operations.

SCT: What incident earned you the Purple Heart?

JG: I was inside one of these mud buildings. We were completely surrounded at the time, firing out a window. A rocket-propelled grenade hit the wall right beside me and blew a hole in the wall. The blast pressure knocked me out and gave me a traumatic brain injury. I suffered from, and still do, some headaches, word-searching, irritability, stuff like that. It’s OK, though. I’m working through it.

SCT: Looking back, what was your biggest satisfaction?

JG: I got to work with some of the bravest young men and women . . . to be out there holding the line, to keep everybody back here safe.

JG: Back in the late ’90s, I was married and had a son. It just didn’t work out, with me being gone all the time. We divorced. Then I met my wife. . . . I just fell head over heels in love with her, and we got married.

SCT: How has it worked out?

JG: She’s been by my side through some of my hardest deployments and dealt with me coming back from deployment when I was angry and suffered from some PTSD. I wouldn’t be who I am today without her.

SCT: Where do you live now?

JG: North of Spokane, close to (the) Canadian border. It’s gorgeous. We just got 4-5 inches of snow. It looks like a Christmas card. I really enjoy the seasons.

SCT: How is it, back to a normal family life?

SCT: Do your Navy skills transfer into civilian life?

JG: Absolutely. I am a leadership consultant with a company called Echelon Front. We sit down with different companies, organizations, first responders, firemen, different corporations, and we discuss leadership principles based on a book that (former SEAL teammate) Jocko Willink wrote called Extreme Ownership, and another one called Dichotomy of Leadership.

SCT: Will your former classmates, your parents, Jim and Cookie Gardner, and old friends get to see you down here?

JG: Oh, yes. We’ll probably be down there at least twice a year.

Fred Swegles is a longtime resident of San Clemente with more than 48 years of reporting experience in the city.