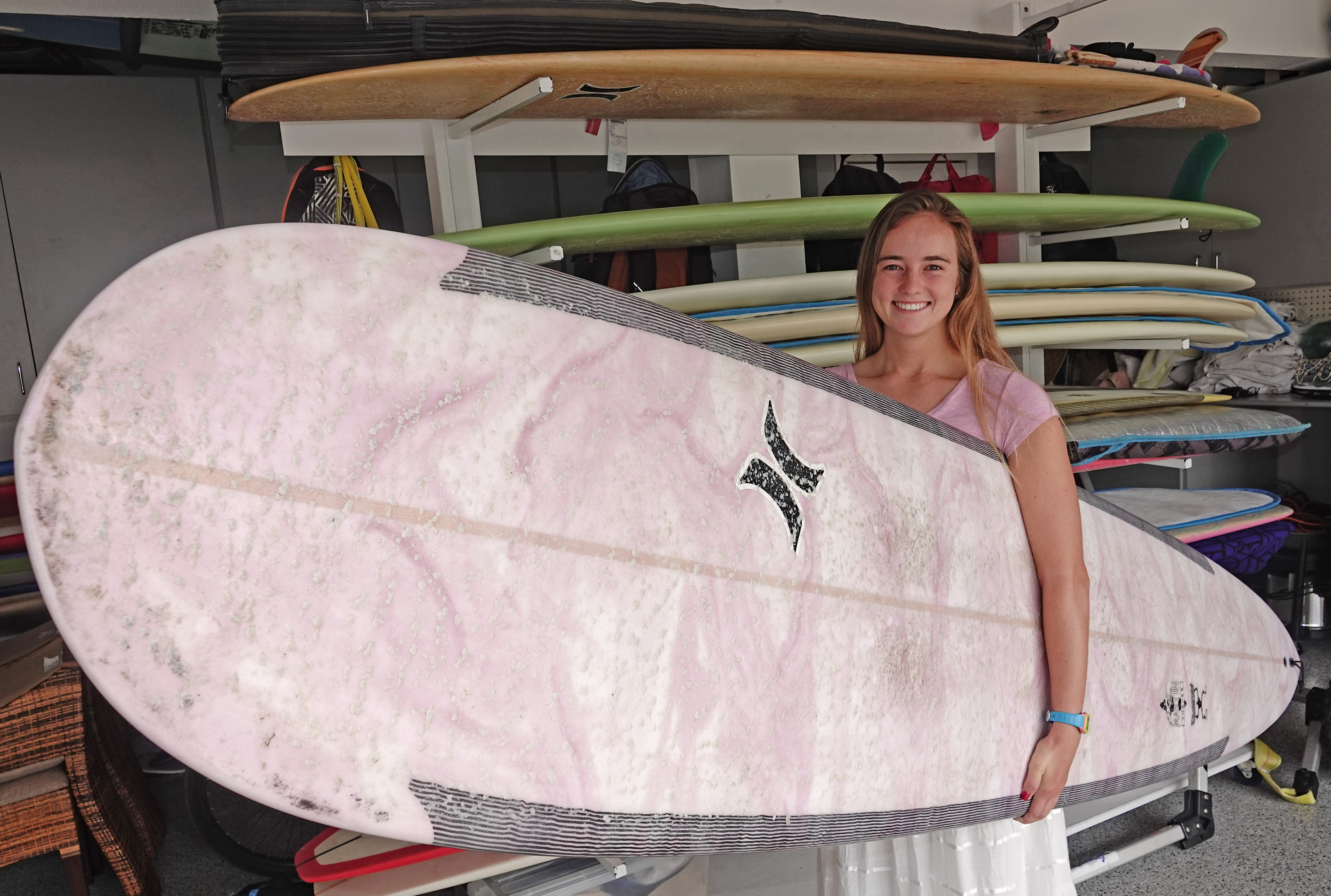 Seven thousand miles from home, the world’s second-ranked professional women’s longboarder is winning over the locals at one of surfing’s premier breaks, Burleigh Head, Australia.

Rachael Tilly, who grew up in Capistrano Beach and won the world pro longboard title while attending San Clemente High, is out to capture a second world title in 2019.

A 2016 graduate of San Clemente High, she was SCHS’ female athlete of the year.

She moved to Australia last May to pursue a business degree at Bond University. During a December visit at her parents’ home, we asked her about it.

Rachael Tilly (RT): Driving on the other side of the road. Grocery stores close super early. And I’m creating a totally new community, friends and surfing. I’ve joined the Burleigh Longboard Club.

RT: Amazing. We have beaches (in California) that we say are right points, like the point at San-O. I never really thought about this until I had an Aussie friend here. He goes, why do you call this The Point? Obviously, because it breaks predominantly as a right. But in Australia, we have right points everywhere. They’re geographically big points, which make for great waves. It’s been fun learning the breaks.

SCT: What do you study?

RT: I’d like to go into sporting event management. I love being the surfers’ rep on the tour. It’d be great to try and use this degree to somehow further the sport of longboarding. It’s something I’m knowledgeable and passionate about. But I think there’s so much in the world, I don’t just have my sights set on surfing.

RT: In 2015 I won the world title for longboarding, WSL Women’s, in China. I’ve won two WSL North American professional titles, 2013 and 2015. In 2017 I finished fifth on the tour. We had two events. I finished fifth in Papua New Guinea and third in Taiwan. This year (2018) we were down to just one major event, Taiwan. I finished second to Soleil Errico from Malibu.

RT: In 2013 I won the silver medal in Peru, 2nd in the world for ISA. This year I went with Tory Gilkerson (San Clemente), Kevin Skvarna (San Juan Capistrano) and Tony Silvagni (North Carolina) to China, Hainan, in January, as a US team. We won two team gold medals. Tory won the ISA gold medal. We’re all great friends on the tour, so it was great fun to work together as a team.

SCT: Did you compete in Australia too?

RT: Won a gold medal in the University Games. I haven’t competed in any pro events. I plan on competing in Noosa in March. I’ve competed three times at Noosa (years past). I’ve won the Noosa Festival (amateur division) once.

SCT: What kind of coverage do you get?

RT: Bond started doing some coverage with me. Some of the stories sort of took off with the local newspapers, like the Gold Coast Bulletin. They did stories on me moving over there, winning the University Games and getting second in Taiwan and bringing that back to Australia.

SCT: What’s been the reception in the water?

RT: One day there was a club meet-up out in the water. I was surfing off to the side and they said wow, you’re really good, it was fun to watch you. I said thank you and they said oh, you have an accent, you live over here now? I said I go to university and they said, were you the girl in the paper yesterday? That was kind of cool. It’s not my home, and to be still embraced by the community has been really great.

SCT: So You’re the 2015 WSL longboard champion, as was Tory in 2016, and now Kirra Pinkerton from San Clemente won 2018’s WSL world junior title in Taiwan.

RT: It’s so fun to come from this community … all the girls and boys you surfed with in high school and middle school … trying to work toward this dream of reaching a title or surfing on tour. We’re traveling the world together. Lindsay Steinriede (from Dana Point) lives in San Clemente. She won the title in 2011.

RT: My very first session was at Doheny, 4 years old. I love being in Capo Beach. I’m equally as far away as to the harbor as I am to T-Street. San Clemente is like my surfing, and then Dana Point, I worked for seven years at Westwind Sailing, a sailing instructor. We just have such a fabulous community. Living in Australia has just strengthened that love for home.

SCT: We hear you got to surf Kelly Slater’s premium wave pool.

RT: Twice now. First time with WSL. In September, I went with the Hurley team. Not many people have longboarded it. It’s a tricky wave. It feels way different to surfing in the ocean. The second time, with Hurley, I felt much more comfortable. I really got to just express myself on it, learned how to actually get some barrels. I got absolutely hammered on quite a few waves trying, but finally started getting the hang of it and got like 3 or 4 barrels. A magical feeling.

RT: I’d love to win a world title. With the second place finish. I was so close. The first (event) will be in Noosa. There’s talk for a second one being in France and we’ll finish off the year again in Taiwan.