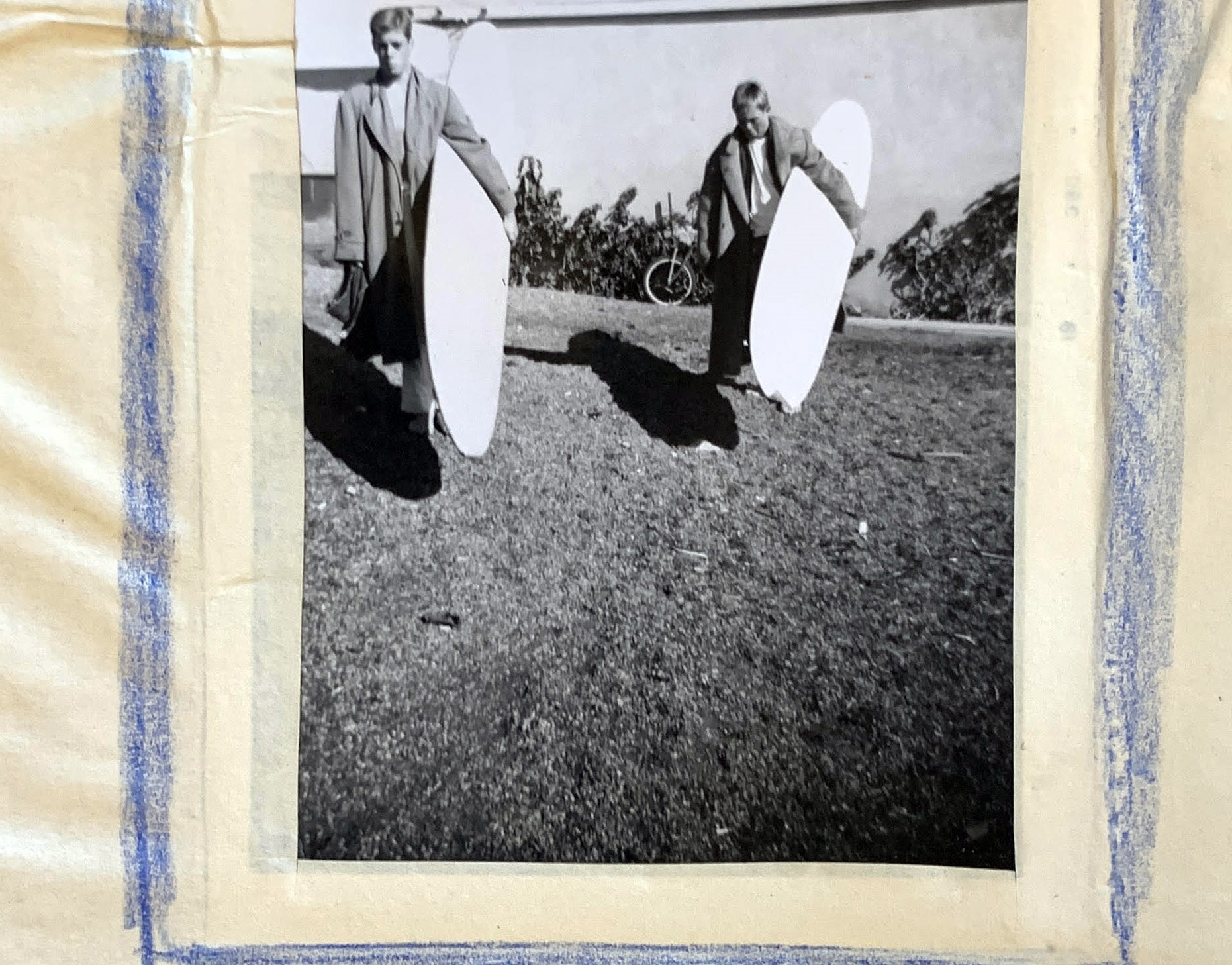 CoastLines: Frigid Water, No Wetsuits, No Leash: A Surfing Era, Long Ago

Surfers, you have no idea how good you have it.

Just think back, as if you grew up surfing San Clemente in the early 1960s, out in the lineup, year-round, no wetsuit, no leash.

Picture yourself paddling out in 58-degree water, no wetsuit, in winter. Some mornings, the air temperature could be in the 40s as you hit that frigid water. Your skin would be shaking in cold winds while awaiting your next wave, totally stoked on every wave you rode.

If your board washed ashore, you’d get the equivalent of an ice cream headache, swimming in to fetch your board on shore. You could handle it. You’d be back out there, again and again.

Maybe 10 of us who surfed T-Street formed an informal little club, wearing custom canvas-style boardshorts that we had made for us—blue, with three orange stripes—so out-of-town surfers showing up at T-Street knew, discreetly, that we were the locals.

The hardest thing was hitting the freezing water to start our day, yet no big deal. We didn’t think twice, tried to stay as dry as possible by knee-paddling out. Maybe got lucky and made it out dry.

We were stoked with every wave we caught, never mind our ice cream headaches.

We had to turn upside down our heavy, double-glassed, 30-pound longboard to go under whitewash, paddling out, desperate to hold those thick rails, tightly grasped with our arms—and with our legs wrapped around the board, trying not to lose grip, lose the board and have to swim ashore.

Soon, our bodies turned numb, and it was hard to move your fingers and arms, grasping the rails.

Swimming ashore, what did you do, then? Another frigid paddle-out? Or go up onto the beach instead, to wrap a Chicago-style winter coat around you?

On a windy day, shivering between sets, we remained wave warriors.

Anything warmer than 60-degree water, we were happy, even if it stayed that cold in summer. Sixty-two degrees was considered pretty mild. Fifty-two was the coldest winter water I recall—doubt I ever went out into it.

One day, surfing in thick fog, between long lulls, I drifted north to the pier. What a shock to see pilings. Caught a wave in and walked back to T-Street.

Another day at T-Street, I wiped out, and the rail of my 9-foot board clobbered me in the jaw. I couldn’t close my mouth. Swimming in, I wondered what would become of my painful jaw. Fortunately, I worked it out, got my mouth to close.

HOW IT ALL BEGAN

I began surfing in 1961. In 1959, a Hollywood movie called Gidget had launched a surf craze in Southern California.

Some of our local surfers owned woodies, not all in great condition, to drive to surf spots up and down the coast. Then pseudo surfers from inland started driving immaculate woodies to the beach to show off an immaculate surfboard on top, whether used to surf or not.

I grew up on Esplanade with my brother Steve, two years older than I. He convinced me to stop riding a surf mat and switch to a surfboard. He drove us in his “gray bomb,” as we all called his 1946 Plymouth, on surf trips. Not too dependable.

It was questionable whether the gray bomb would get us out of Dana Cove, get us home up the only road out, so steep.

Our dad got us a pair of thick, heavy, Chicago-style winter coats to wear to T-Street or anywhere we surfed when frigid.

WARMING OURSELVES ON THE BEACH

T-Street had a steel trash can.

We would bring matches during winter. When our session ended, we wore our Chicago coats and burn whatever we could find in the trash can, holding our hands over the flames.

At one time, I was the youngest gremmie—grom—in the group. So, it was my job to climb the overpass to the street and scavenge trash cans along Paseo de Cristobal for any newspaper or other materials to burn.

Newspapers were best. But one day I discovered something unimaginable in one particular trash can.

I imagine there was an older neighborhood gentleman who liked girlie magazines, filled with exciting pictures of topless ladies.

I could picture his wife, unaware of his magazines, as he would discreetly, anonymously, deposit his stash into a public trash can along Cristobal.

I would announce the girlie magazines excitedly, anytime I ran them, concealed in a paper sack, down the overpass. We would examine each magazine, page by page, while feeding the flames.

Wetsuits did exist in the 1950s, but they were primitive. None of our group at T-Street wore them in the early ’60s. As wetsuits improved and began being bought by more surfers, we transitioned to them.

Early ones were heavy, constrictive, hard to paddle in or to surf. And leaky, plenty cold. I’ll guess it was the 1970s when wetsuits improved by leaps and bounds.

They became light, flexible, taped at the seams so water wouldn’t get in, and were much more comfortable.

At some point, surf leashes appeared, funky at first but becoming comfortable and handy. It changed surfing. Some early leashes were attached to the nose of the board, awkward to use.

In the ’60s, you could smell the fumes of every car chugging down every street. You can’t smell that today—only if you ever encounter an old-school car. They were everywhere, back then.

Technology has dramatically wiped out fumes and air pollution.

Santa Ana winds would blow warm offshore breezes from inland. We’d be stoked to get a nice heat wave in which to surf. Smoggy morning breezes would push smog out to Catalina Island, then drift back to shore.

After school, we’d lug our heavy longboards down the street to T-Street, often perched atop our heads. By the time we caught a few waves, we would have ingested so much smog, we’d be coughing with agony, desperately short of breath, and our eyes stinging awfully.

Your lungs were painful anytime you exerted yourself, having to suck in smoggy air.

Struggling to carry your heavy board back up the hill, smog overcame you, making you suffer.

We would surf as long as we could. We knew what was coming. But, hey, a heat wave we wanted so badly also was worth it.

So, this is about a long-gone surfing era in San Clemente.

It’s a wonderment how we surfed frozen, numb, shaking for hours, taking it for granted. And remember, we were stoked to surf through it all.

This winter, San Clemente surfers, pick a freezing, windy day and try what we did, just to see how long you could stay out, no wetsuit or leash.

Even do it on a clunky, thick-railed, heavy old longboard, to see how it was for us.

And, sorry, I can’t find a way to bring 1960s smog back to T-Street today. So, you’ll never experience the agony we wave warriors would endure, again after again, living with T-Street stoke and smog.