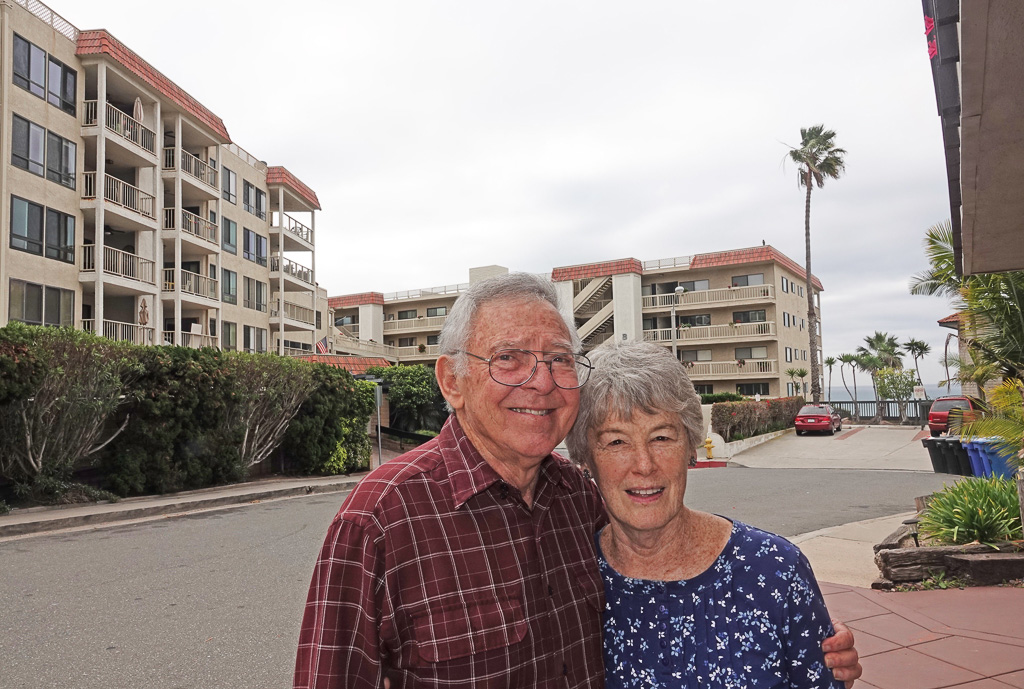 Few people in San Clemente have watched the town grow up around them quite like Dick and Marilyn Herr.

When the Herrs moved from La Habra in 1965, there were no structures between their house at 406 Corto Lane and the bluff. Two lots were vacant.

Off to their left, they enjoyed the sight of a stately Spanish-style house, built in the 1920s on 2.7 acres by Ole Hanson Jr., son of San Clemente’s founder.

It was right next to the founder’s house. It included a horse barn.

“Where we lived, you could throw a rock in just about any direction and hit a vacant lot,” Dick Herr said.

Then in 1969, President Nixon purchased a seaside home that put San Clemente on the international map. Condominiums began popping up all along the coast.

The onetime home of Ole Hanson Jr. was demolished to make way for 72 condominiums, housed in three box-shaped, four-story buildings that dwarfed the Herrs’ home.

“It probably should have been a historical site,” Dick Herr said. “The Coastal Commission wasn’t functioning then.”

Ole Hanson’s Spanish Village grew. Both of the vacant lots in front of the Herrs’ house became three-level developments. Their house is the smallest thing on the street.

Happily, a view corridor survives at the end of Corto Lane, between condos. The Herrs, now in their 80s, say it remains a great place to live.

They have neighborhood friends. They were able to raise four children there, enjoying a nearby beach reachable by a steep public stairway from Corto Lane.

“At first, it was just a path,” Dick Herr said.

So the town has changed dramatically. But it was the prospect of major growth that got Dick Herr recruited here in the first place, to work for the Capistrano Unified School District (CUSD).

The district, formed a year earlier, would need administrators for planned area schools. Herr, a teacher since 1958, had just earned his administrative degree. He had offers from the CUSD and from districts in San Luis Obispo and Santa Rosa.

“It was a good choice,” Herr said.

After some health issues in 1985, he chose a less stressful job—teaching the fifth grade, just working with kids—so no more night meetings, dealing with discipline or other issues principals face.

He got to enjoy teaching students at his old school, Ole Hanson, for 10 years. After his 1995 retirement party, he was in such demand as a teacher that he soon had requests to substitute a couple of days a week.

He subbed at Truman Benedict Elementary and Bernice Ayer Middle School, finally calling it a career around 10 years later.

As much as San Clemente has grown, “It’s still a wonderful place,” he said.

You can find him three mornings a week playing tambourine with a ukulele group that meets at 9 a.m. at Café Calypso on Avenida Del Mar.

Fred Swegles is a longtime San Clemente resident with more than 47 years of reporting in the city.