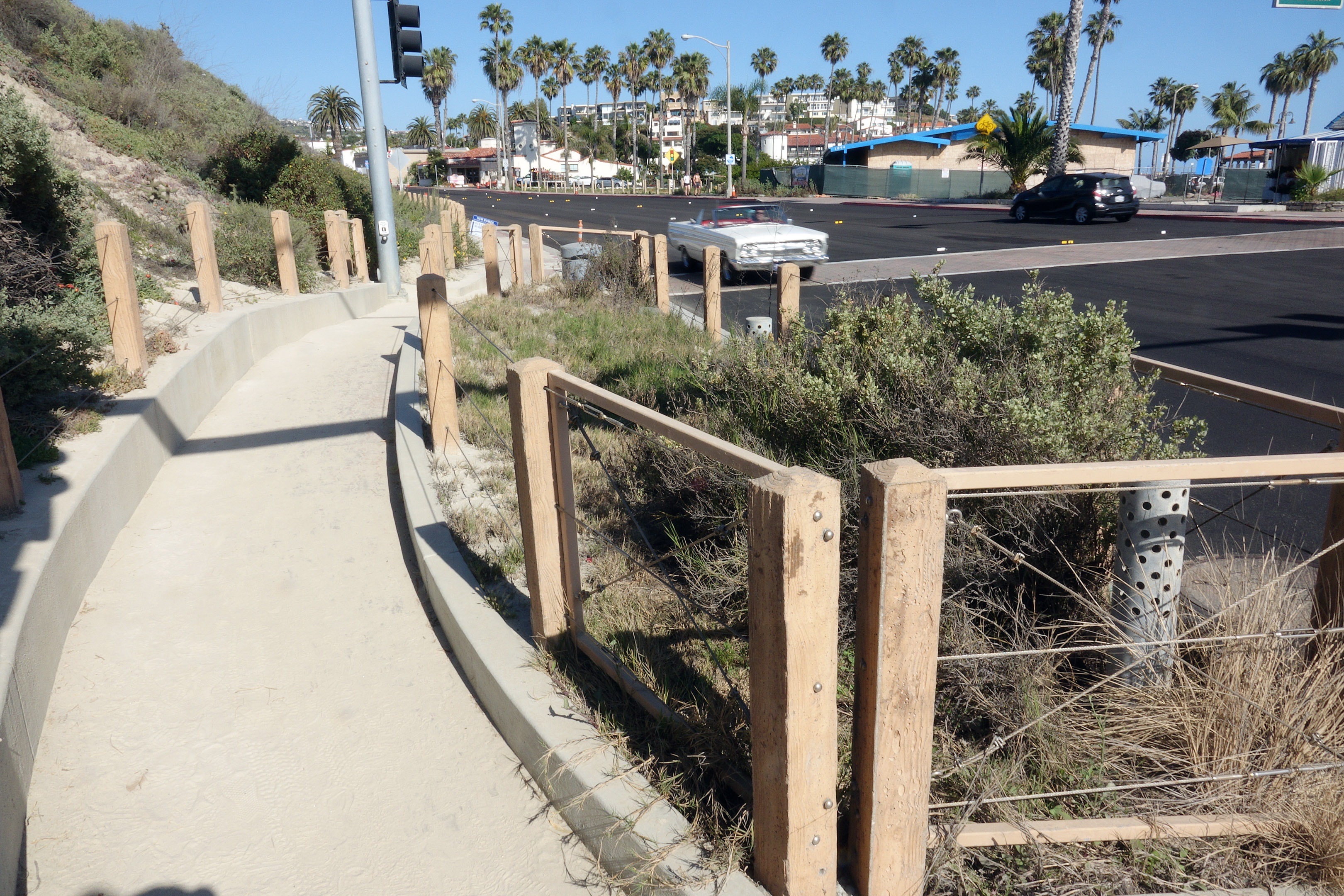 CoastLines: How a City Sidewalk Project Became a State-Protected Habitat

Sea Summit trail walkers who cross the highway en route to or from North Beach at Avenida Estacion may have wondered about the northbound El Camino Real sidewalk just north of the traffic signal.

Why isn’t that sidewalk straight?

A 45-foot stretch of sidewalk takes a detour around what appears to be a weed patch protected by fencing. There’s also a footbridge with a see-through deck. Beneath the deck—more weeds?

At each end of this curiosity, you’re on a straight sidewalk, the kind you might have thought you’d be on the whole way.

My guess is that all of this is a head-scratcher for many pedestrians, including nearly everyone who purchased a home in the new, adjacent Sea Summit community.

This is one of the more unusual public works stories I can remember sharing with readers during my 50 years of San Clemente journalism.

In 2009, the city planned to repave El Camino Real at North Beach, including a fresh new sidewalk on the north side to replace an old asphalt sidewalk.

In 2010, the Coastal Commission did an environmental assessment and determined that what many people might call weeds was actually an ESHA, an Environmentally Significant Habitat Area.

The city had to design and build not just a sidewalk but a small wetland reserve. Never mind that there had earlier been a straight sidewalk. One rainy winter, a mudslide had buried it.

Evidently, no one bothered to scrape away the mud and clear the asphalt. There weren’t many pedestrians using that area, and the dirt or sandy path that evolved there was quite usable. It looked rustic.

The site belonged to developers who were planning to build 308 homes on what was then called the Marblehead Coastal property. The project eventually would be renamed Sea Summit and would pay for perimeter improvements along El Camino Real.

So the city designed and built a $92,500 sidewalk, per a Coastal Commission directive. It detoured around what, to the uninitiated, probably looked like a weed patch, and it had a see-through footbridge. Pedestrians could look down and appreciate environmental protections beneath their feet.

The city spent another $25,000 on post-and-rail fencing to keep plants from being trampled and to design and install an interpretive sign, explaining why all this was necessary instead of just replacing old asphalt with a nicer sidewalk.

If you step off the curb beside the footbridge—careful not to get bulldozed by a passing car, truck or bus—you can stoop down and see remnants of asphalt, amid sprouting wild plants.

As I reported in 2011, the Coastal Commission identified an area of saltgrass, pickleweed and goldenbush that had grown up over the asphalt in a thin accumulation of soil and gravel from decomposing sandbags that had been left there after the mudslide.

A Coastal Commission report said the saltgrass, and a shallow layer of soil covering the degraded sidewalk, met the commission’s definition of a wetland. It required protection under state law.

The report said that the footbridge’s fiberglass surface would let in enough light to sustain the saltgrass and let pedestrians “pass over and see the resource.”

The interpretive sign was nicely done, similar to signs you see along Sea Summit trail. But it’s no longer there. I suspect that at some point, this display either became vandalized or degraded and was removed.

So now, a new generation of sidewalk users is left to scratch heads in wonderment why we have this see-through footbridge and a sidewalk that meanders around what may appear to be a weed patch.

I was reminded of this last week, when the city repaved El Camino Real. I revisited North Beach’s iconic wetland reserve, feeling the unrestrained curiosity of Huell Howser on one of the reruns of his TV show California’s Gold.

I would see for myself if plants were still sprouting from the decrepit asphalt. They were.

One wonders if a prodigious new mudslide that has buried a stretch of Sea Summit sidewalk along El Camino Real between North Beach and Poche Beach will someday be declared an ESHA.

Do we get another see-through footbridge there? It could be rather impressive.

Pete Van Nuys, who operates a bicycle shop at North Beach, was there in 2011 to see the Coastal Commission’s wetland open to the public, across the road from him. He occasionally chats about it with passersby.

“They’re always amazed when I tell them why it’s there,” he said.