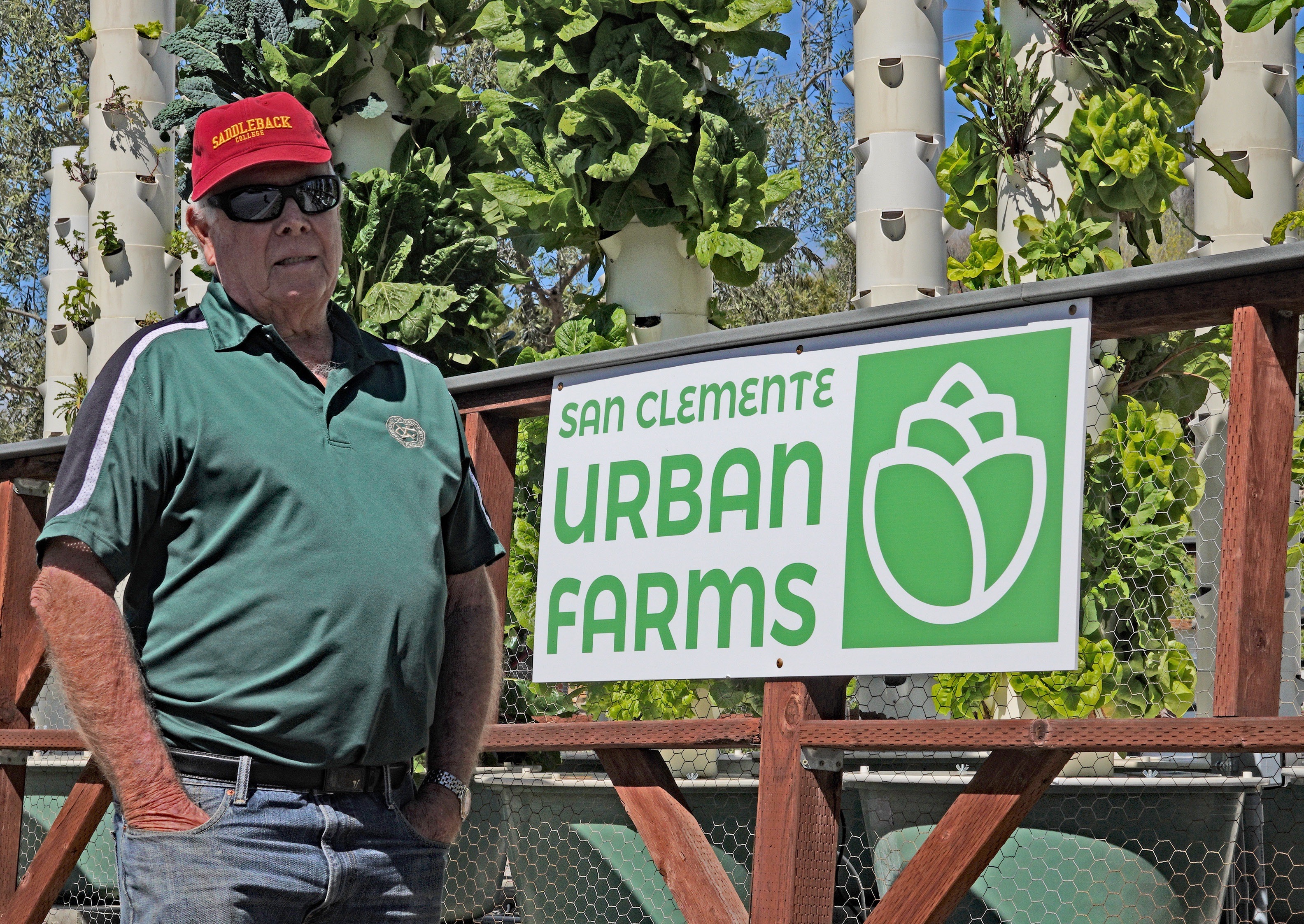 CoastLines: How a Green Good Thing at Bella Collina Got Better

Echelberger, a retired airline pilot and real estate broker, is a member of the golf club. In 2017, he enrolled in horticulture classes at Saddleback College. To practice what he was learning, he converted 1,000 square feet of open space at Bella Collina into a garden.

“I had six rows on drip lines,” he said. “I built some raised beds. I harvested a lot in two years. Everything I harvested, I took to the kitchen.”

It was a precursor to an ambitious undertaking that took shape this winter, maximizing yield with vertical gardens that are said to use 90% less water than conventional in-ground growing, 90% less space and no fertilizers or pesticides.

“The farm will be good for the community,” Echelberger says. “In fact, my final presentation for one of my horticulture classes will be on the benefits and advantages of vertical farming.”

As a retiree in 2001, Don began enrolling in classes at Saddleback that interested him, from astronomy to electronics.

“So far, I have accumulated 69 units,” the eternal student says. “Next semester, I will complete the requirement to receive a certificate in urban farming.”

Echelberger and wife Mary have resided in San Clemente for 53 years. For decades, they gardened in the spacious backyard of a home on Avenida Gaviota. They have downsized into a condominium, but Don built a raised bed there to continue growing.

He and Mary moved to San Clemente in 1967 after he left the Air Force and was hired on to fly with TWA.

“We chose San Clemente, because it was as far away as the airlines would let me be from LAX,” Don says.

During his 32 years with TWA, the Echelbergers loved San Clemente so much that they stayed put even during the 1990s, when Don had to commute to St. Louis and New York to begin his trips.

“I did not want to move to either place to work,” he recalls.

What’s more, he had established a prosperous real estate business in San Clemente.

“In 1970, the airlines started laying off pilots,” he recalls. “I thought I would be next, so I got my real estate license and went to work for George Conrad. Five years later, I started my own company with multiple partners that grew to 30 agents. We eventually sold San Clemente Real Estate Co. to First Team Real Estate.

“I thought I would only be involved a short time. But it turned out to be 27 years later that I left the business,” he says.

“I had the best views of the major comets when they passed by the Earth,” he remembers. “There’s nothing like the front-row seat.”

“Both of our sons went off to college but returned to San Clemente to raise their families,” Don says. “Doug, my youngest, did follow me into real estate. David works for the IRS as a space planner and building manager.”

As busy as Don was raising a family and juggling two careers, he embraced community service as a member of the Exchange Club of San Clemente. A former president, he is the club’s longest active member: 49 years.

“The club supports almost every charity in town, from the senior center to the Boys & Girls Club,” he says. “The Exchange Club sponsors a golf tournament every year to benefit Marine Family Services. The club has raised over $100,000 for that organization.”

At 81, Don continues to tend Bella Collina’s rose garden, orchard and grapevine. He is happy to see San Clemente Urban Farms making maximum use of the 1,000 square feet, able to harvest 1,144 cleanly produced organic plants every four to six weeks.

“They have 26 towers. and they have room for at least another 26,” he says. “Greg was growing at his home, and his home had a north-facing slope, so in wintertime they weren’t getting a lot of sun. This gets sunshine all year long.

“It worked out,” Don says. “Bella Collina has really cooperated with them, helped them level all that out and built a concrete pad to set their farm on.”