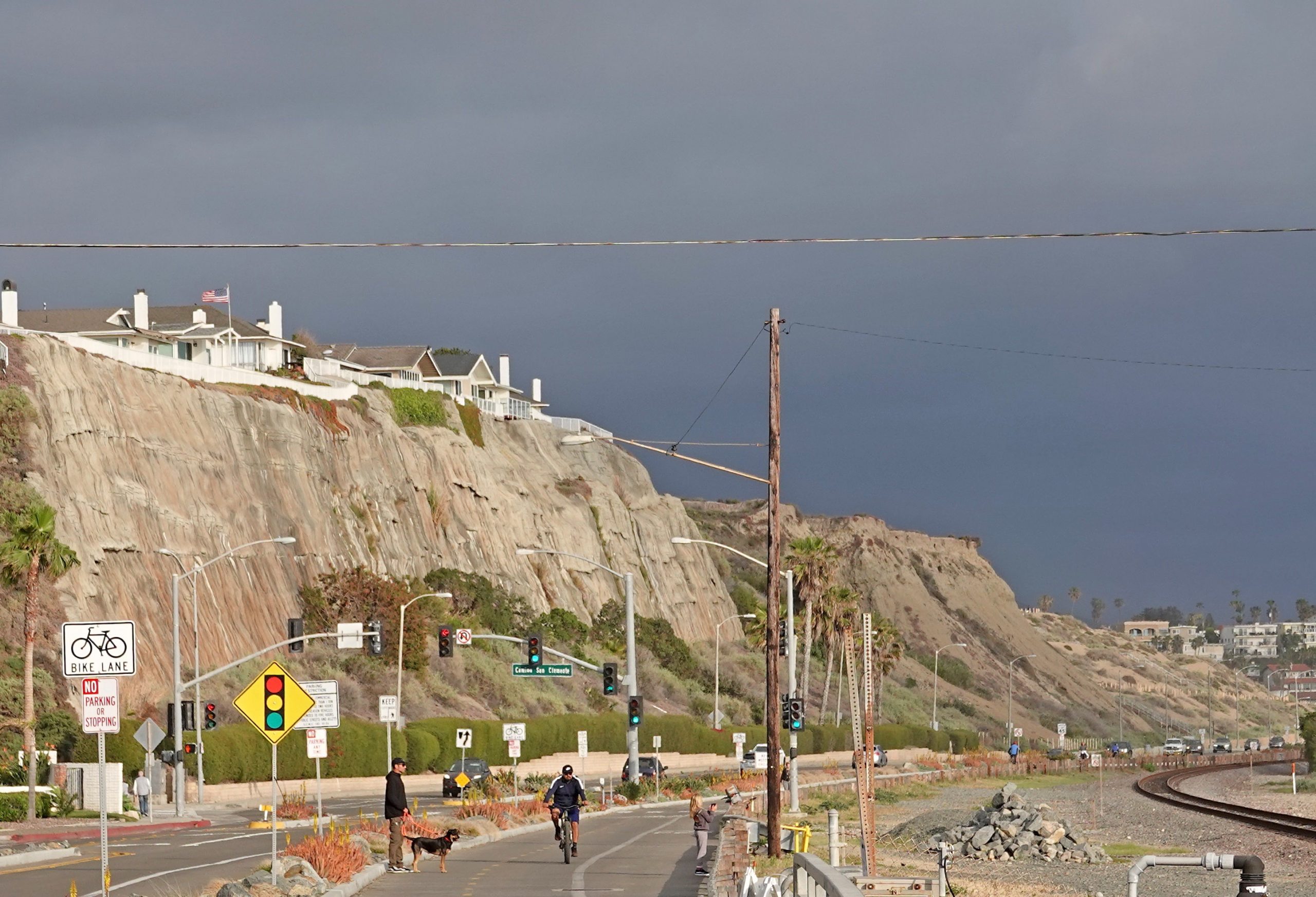 As you drive into San Clemente from Capo Beach on Coast Highway, a head-scratching sight may suddenly pop into view.

Why on Earth do the coastal bluffs up ahead in San Clemente look like three magically different walls of pie crust?

NUMBER ONE: The first 100-foot-high cliff that you see, beneath the Colony Cove community, looks like a Hollywood movie set, a fake palisade.

I call it the Jurassic PARK-isade.

Imagine we could set up a 20-foot-high, robotic creature—a computer-animated dinosaur—on the Jurassic PARK-isade’s base. Watch our dinosaur, craning its neck out toward the highway, and down toward every car that’s passing by.

NUMBER TWO: The next stretch of barren brown cliff looks crippled and crumbly.

It probably looked something like this in 1931, when it was cut into so that the original highway could be widened.

That bluff no doubt has crumbled a few winters, over the past 90 years. Just last winter, the city had to repair a mudslide and rebuild a sidewalk that’d been buried.

NUMBER THREE: The third and final cliff, much shorter than the other two, isn’t steep at all.

It was drastically cut into in 1990 under an emergency slope repair permit. Today, it looks nothing like it had before 1990.

ARE THESE OUR ‘THREE BLIND BLUFFS?’

If you lived in San Clemente around 1990, you may remember how differently those three stretches of cliffs had looked in our town’s prior epoch.

In February 1990, the city closed the entire highway between Poche Beach and North Beach for emergency repairs.

City Manager Mike Parness had announced “alarming deterioration of the face of the bluff, as well as up top.”

He said it would require geologists to study and recommend repairs. The biggest would require the Lusk Company—the future developer of 250 vacant acres of Marblehead Coastal property—to stabilize its stretch.

But before 1994, a historically spectacular bluff mudslide made news in 1993, not in San Clemente but barely outside the city limits.

On Feb. 22, 1993, along Dana Point’s stretch of bluffs just outside San Clemente’s border at Camino Capistrano, a massive mudslide buried the highway and the coastal railroad tracks, beneath mud and rubble.

Railroad clearance crews worked ’round the clock to enable train service to resume two weeks after the mudslide. But then it took fully two years to unbury the highway, repair the bluff and reopen the highway.

Funding it, designing it, permitting it and performing the repairs was a complicated undertaking, dealing with the federal government, the state, the county, Dana Point and San Clemente. It was Dana Point’s bluff face. Atop those bluffs were five San Clemente homes ruined by the collapse.

In 1995, Dana Point’s stretch of road reopened. The stabilized bluff looked much different, covered with a textured wall resembling something animated, like from Disneyland.

The massive 1993 mudslide had no impact on San Clemente’s nearest bluffs, just south of Camino Capistrano at Camino San Clemente.

The city determined a need to stabilize that bluff to prevent anything similar from ever burying San Clemente’s highway or possibly collapsing blufftop homes.

San Clemente secured funding from Caltrans and the Federal Highway Administration to stabilize the bluff and create a similarly textured wall, which appeared in 1996.

In 1990, the Lusk Company’s first bluff scalping had secured an emergency Coastal Commission permit for “310,000 cubic yards of grading in order to stabilize approximately 1,800 linear feet of the approximately 2,400 linear feet of 70- to 100-foot-high bluffs, which are on the Marblehead site and which face upon El Camino Real.”

Lusk scaled back its own bluffs, without knowing what intensity of development it might try to develop later.

In 1987, the city council had approved an intensive Marblehead Coastal development, including a Richard M. Nixon Presidential Library, 1,198 homes, a shopping center, parks, a hotel, an educational facility and a civic center.

That proposal got so bogged down, during months of public hearing debates in San Clemente, that former President Nixon gave up on his San Clemente library site. He chose to build his library in Yorba Linda, where it wouldn’t need to be attached to a hotly disputed oceanfront development that the Coastal Commission might never allow.

That led to several less intensive development plans over the next decade, finally leading to the Coastal Commission’s 2003 approval for 313 homes, an outlet shopping center, canyon preservation and open space all along the coastal bluff frontage.

Final approval came in 2005. The bluff that’d been cut back in 1990 would now include trails on terraces and stairways. There was to be no reshaping or cutting back, nor any trails atop the taller Marblehead Coastal bluff adjoining Colony Cove’s textured bluff face.

Grading for development began in 2006 but was halted by a national economic collapse in 2008. Development was revived in 2014, producing 309 homes, renamed as Sea Summit, together with the Outlets at San Clemente, plus multiple parks and widespread open space.

None of Sea Summit’s 4.1 miles of public trails would extend over to the top of the old-time bluffs that dated back to 1931 excavation. It’s just an open space preserve.

Imagine if Nixon hadn’t abandoned the intensive San Clemente Nixon Library plan in 1987 and somehow the Coastal Commission had approved it.

Avenida Vista Hermosa would have carved into the cliffs, descending downhill to intersect with El Camino Real with a signalized intersection, between Avenida Estacion and Camino San Clemente.

As it stands, we today still see three distinct bluff faces—Colony Cove, the unaltered old-time bluff that’d been cut into in 1931 and shaving of Marblehead Coastal bluffs in 1990.

Life and Love After 50: Emerging from the Pandemic, Seniors Are Getting the Travel Bug