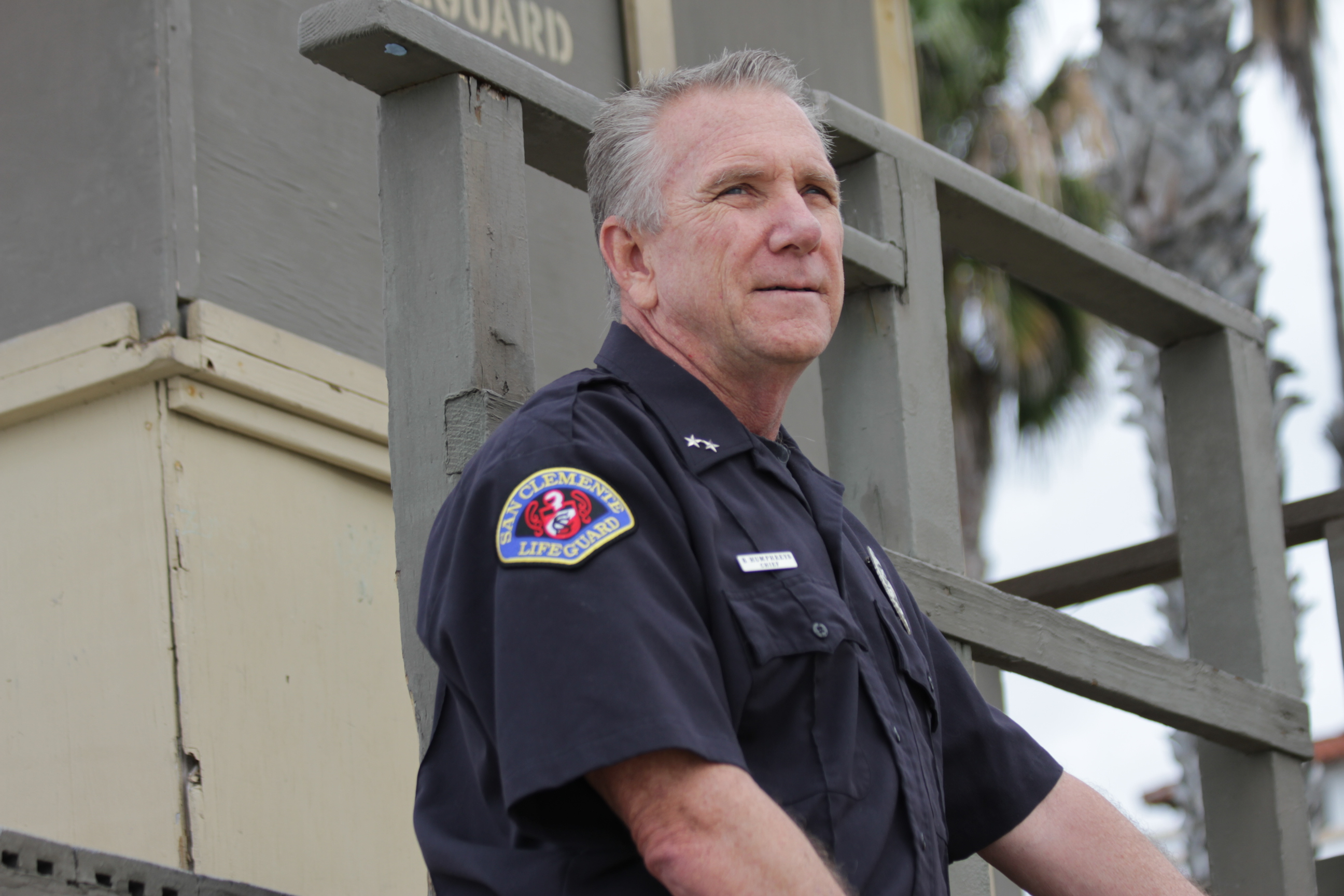 The legacy of safety that recently retired lifeguard and Marine Safety Chief Bill Humphreys leaves at San Clemente’s beaches reaches far beyond the most frantic, desperate bathers that he saved during a 43-year lifeguard career.

He once calculated that he probably rescued more than 1,000 swimmers.

But then, let’s also look at the legacy of Neighborhood Beach Watch.

It’s a program Chief Humphreys introduced in 2011, a takeoff on San Clemente’s Neighborhood Watch, in which neighbors look out for each other to prevent crime on their street.

This program empowers an enormous talent pool, the surfing community, to know how to safely respond to distressed bathers that surfers may encounter while riding waves in any situation—say, in winter, when lifeguards may not be nearby.

The program also can teach non-surfers—people just walking the beach or reading a book—to recognize an unfolding emergency and quickly, effectively, summon help.

It’s a less expensive alternative to a full-fledged rescue boat, which the city once had but found it couldn’t afford. It was a battle getting the PWC, Humphreys said, as it is most often in standby mode. But when needed, it can quickly knife its way out through surf, hauling a rescue sled, to swiftly perform multiple rescues.

“It’s one of the biggest improvements in lifesaving,” Humphreys said.

Which leads to another plus, a Marine Safety drone.

In 2017, the camera-equipped aerial device helped lifeguards locate, monitor and track multiple Great White Sharks offshore during a scary summer of sightings. The drone also can quickly scan the ocean for a missing person. Thankfully, Humphreys said, the drone has never had to do that.

Humphreys was instrumental in establishing San Clemente’s Lifeguard and Junior Lifeguard Foundation, which funded the drone.

At age 60, the retiring chief will continue as president of the California Surf Lifesaving Association, while now enabling him to spend more time with his wife, Karen. When they met, he was teaching a surfing class for the city. She was a student.

The couple has raised three sons—Dan, 29, a high school teacher; Trevor, 28, an electrical and software engineer; and Nick, 25, a mechanical engineer.

Lifeguarding has been a dream career for Humphreys, who as an 11-year-old surfer envisioned himself saving lives at local beaches.

At 16, as a talented member of San Clemente High School’s swim team, he wanted to try out for the lifeguards, but the city had upped the minimum age to 17. So he took a Regional Occupational Program lifesaving course taught by city lifeguards. Graduation included summer service as a volunteer lifeguard.

Turning 17, Humphreys learned San Clemente had no slots to fill that summer. No tryouts. So he tried out in Laguna Beach, was hired, and then defected when San Clemente positions opened up.

Graduating from SCHS in 1978, he worked as a seasonal lifeguard for San Clemente while earning a degree at San Diego State. Achieving a teaching credential at UC Irvine, he taught one year in the Capistrano Unified School District. By then, he had twice been voted Lifeguard of the Year by his peers, and the city made an offer he couldn’t refuse.

Humphreys had been a lifeguard understudy of veteran Lt. Larry Moore, who had been taking technology courses and now was transferring to City Hall to be the city’s computer guru. Humphreys happily stepped in as marine safety lieutenant, CUSD’s loss.

Marine Safety Lt. Rod Mellott will be interim chief until the city names a successor.

Any advice for that successor?

“Remember that it’s a people business,” Humphreys said. “The success of the department relies on good systems in place but, most importantly, good people.”

Bill Humphreys’ most memorable lifesaving experience came around 1982, from a tower at Linda Lane. He noticed something tiny, perhaps a child’s ball, bobbing in the water.

“I realized it was the top of a head,” he said.

He sprinted into the water with an adrenaline rush like never before.

“He sank right before I got to him,” Humphreys said, “but I was able to see him underwater. I pulled him up. He was choking and crying. I got him back to the beach and walked him up to his mom. She wasn’t even aware that he was missing, or in the water. She was reading a book. She was just real nonchalant. And I went back to my tower. That’s when it really hit me.”

A mother could have gone home that day without her son. Humphreys was overcome. He wept.

Another day, at North Beach, Humphreys spotted a girl, maybe 7, being pulled away from shore in a rip current.

“I got to her,” Humphreys said. “We were getting pulled out in a rip. The waves were just pounding. Her friend was a little bit farther out, screaming for help. I tried to get my arm around her. I got her into my arm, and we were underwater. I had both of them, and the second one got ripped out of my arms. We got tumbled pretty good.

“I remember pushing the one girl up to the surface. And then I couldn’t find the other girl. I searched and searched and started waving for assistance.”

Lifeguard Greg Page responded, negotiating crowded waters near shore. He ran into a little girl who was crying. “She had been washed in, underwater,” Humphreys said.

As Page rescued her, she described how another lifeguard had grabbed her, and she got torn away. “That one was pretty dramatic,” Humphreys said. “The kids were fine. I don’t think we even met the parents.”