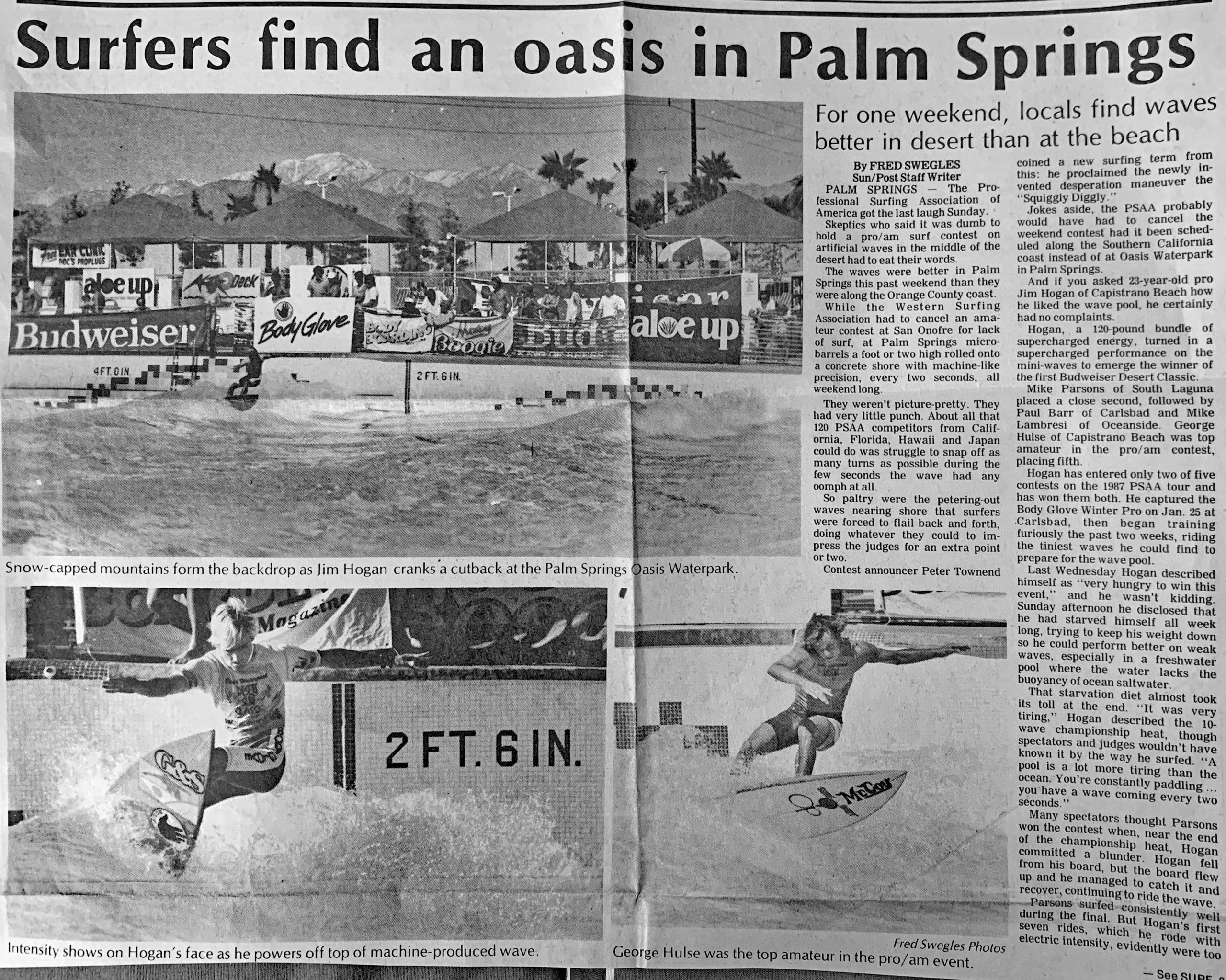 Did you hear that Irvine is building a new water park? It reminds me vividly about one that Irvine operated for 25 years until 2011, and another in Palm Springs back then, when pro surfing decided to try competition in woefully weak waves.

I’ll never forget the first inland contest I photographed in 1987 at Oasis Waterpark, which had opened in 1986.

How could talented pro surfers weighing 160 to 200 pounds manage to wiggle tiny smack-ups off 1-foot waves that generated near-zero power? Even worse, the freshwater pool lacked saltwater buoyancy that could help support surfboards like ocean water would.

I must say, my first look at artificial waves was a gorgeous setting in March 1987, against a spectacular backdrop of snow-capped mountains for the Professional Surfing Association of America’s Budweiser Desert Classic.

“They weren’t pretty,” I wrote about Palm Springs’ surf maneuvers. “They had very little punch.”

Among amateurs, George Hulse of Capistrano Beach was tops.

Some 120 PSAA competitors from California, Florida, Hawaii and Japan struggled, I wrote. “So paltry were the petering-out waves nearing shore that surfers were forced to flail back and forth, doing whatever they could to impress the judges for an extra point or two.”

Contest announcer Peter Townsend defined pro surfers’ desperation as “the Squiggly Diggly,” I wrote. And, ironically, the squiggly drew a little laughter that week, compared to the Pacific Ocean.

“Skeptics who said it was dumb to hold a pro-am surf contest on artificial waves in the middle of the desert had to eat their words,” I wrote. “The waves were better in Palm Springs this past weekend than they were along the Orange County coast. “

That weekend, a contest at San Onofre was canceled for lack of surf.

Hogan told me he’d starved himself all week to keep his weight down, taking its toll.

“It was very tiring,” Hogan said in San Clemente’s Daily Sun-Post. He called his 10 waves in the finals “a lot more tiring than the ocean.”

In the women’s division at Palm Springs, an incredible up-and-coming talent from Florida, then living in Huntington Beach, won the contest—Lisa Andersen, who in the 1990s would win four world professional surf titles.

Parsons told me that wave pools were being built across America and wave quality eventually would get better.

“It’s the only way we can get surfing into Middle America,” he said.

Recently, Irvine announced that a new Wild Rivers aquatics park will open in 2022, replacing one that closed in 2011 to be replaced with housing.

At the time, it was described as “the best inland surfing wave ever produced.”

I agreed then it was better than Palm Springs’ piddly waves, but it was ludicrous to expect a full-sized pro to smack a prodigious power whack.

Winner in 1988 at Wild Rivers was a 16-year-old from Florida—5-foot-2, 105-pound Kelly Slater, then proclaimed the best amateur surfer in the world. This was his first victory in a national pro-am contest.

Slater was a stylish winner at Wild Rivers.

San Clemente High grad Jimmy Hogan, who’d ranked No. 2 on the 1987 PSAA tour, surfed well but finished ninth. The Sun-Post published a photo of him in 1988 at Wild Rivers and one of Slater placing first. The final heat was the youngest in PSAA history—ages 16 to 18.

Slater said he looked forward to returning in 1989 to Wild Rivers.

“That ride … the one they call the Nairobi Express, is pretty gnarly!” he said.

The finalists “skated, carved, pivoted and danced across those little waves with finesse that would make a skate park champion green with envy,” I wrote. “The man-made waves even looked like real ocean waves in the hands of Brown & Co.”

Who would ever know that Slater would grow up to dominate the sport, capture 11 world pro surfing season titles and then personally develop a game-changing, high-tech inland wave pool, a world-attention entertainment phenomenon at Lemoore, Central California?