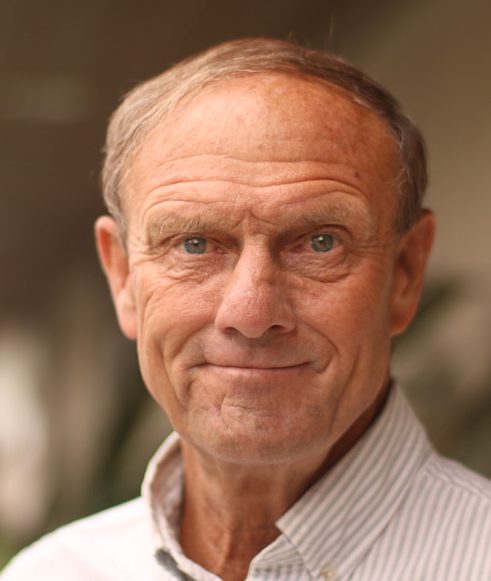 Two weeks ago, I casually asked an acquaintance if she remembered a San Clemente dog that used to hang out along Interstate 5.

I was chatting with Jen Nielsen Cuda at the Ole Hanson Beach Club. I figured that since she was a Cuda, she must remember the dog that I had written about nearly 25 years ago.

So I went home and searched NewspaperArchive.com for the column I had written, titled “Doggone.” It took multiple searches, but I found it, published on Aug. 3, 1995.

San Clemente resident Rick Cuda had called me in 1995, informing me that his son, Kevin, who was 11 at the time, had made a really cool discovery while riding in the car southbound on I-5 between the Pico and Palizada exits.

As you head uphill on I-5, a green sign comes into view, far atop the hill, beyond the Palizada exit. The sign tells how many miles it is to the next exits. But if you look abstractly between the reflectorized letters and numbers, you can see the green image of a dog, seemingly walking toward the ocean.

With Rick’s directions, I tried to find Kevin’s dog. On repeated southbound runs along I-5, I couldn’t find any dog on any sign.

So I called Rick, bewildered. He offered to show me. He drove me, with Kevin in the car to encourage me.

We headed down the I-5 dip at Pico, passing the infamous neon Denny’s sign, and then ascended the freeway grade.

Kevin and his dad began prodding me, “See the dog? See the dog?” Suddenly, I was in nirvana. I saw the light.

I can assure you, it’s the most loyal dog in San Clemente, always there for you. After my 1995 column appeared, countless readers discovered Kevin’s I-5 dog, which he had named Auggie after a beloved terrier the Cuda family used to have.

Readers contacted me to say they, too, now knew Auggie. Some would drive their houseguests out onto I-5 to show them Auggie, too.

I advised readers that it’s easiest to notice Auggie when the sign’s lettering is illuminated by headlights. I also warned, please be a passenger, not the driver, when looking for Kevin’s dog. Don’t be a distracted driver.

The sign is too perfect. It made me wonder if some sly, genius Caltrans employee designed the sign precisely to create a reverse image of a dog. In my 1995 column, I imagined there was this Caltrans dude “smirking at the entire motoring population of California every time he drives past his creation.”

I posted a screenshot of the column on Facebook on Oct. 5, as a surprise for Jen Cuda.

It turns out that the memory of Kevin’s dog resonated with others on Facebook, too.

“So cool!” one wrote. “I totally forgot about this!”

One local recalled that her son, who would have been 4 in 1995, would shout, “Mama, the doggie!” whenever they drove home that way.

“I had no clue what he was talking about,” she recalled. “I’d chew him out for distracting me about a dog on the freeway. And then one day in the evening, there he was! Scotty! To this day, I look for ‘Scotty’ when I’m headed southbound. My boyfriend still hasn’t found him.”

The screenshot that I posted showed not only my column, but portions of other stories on the same page, generating Facebook comments about a photo I’d taken of Bill Stewart and three others riding a giant surfboard he’d demo’ed at the U.S. Open of Surfing.

When Jen saw my post, she replied, “You found the article! Too funny! We looked tonight and couldn’t find (the dog) . . . will look again tomorrow!”

What a rush, realizing how a chance remark made at the Ole Hanson Beach Club could produce so much buzz.

“I’m definitely going to look for Auggie,” wrote another.

Just please, everyone, be a passenger, not the driver. Keep the driver’s eyes on the road, be safe, be happy and wish Auggie a good night.