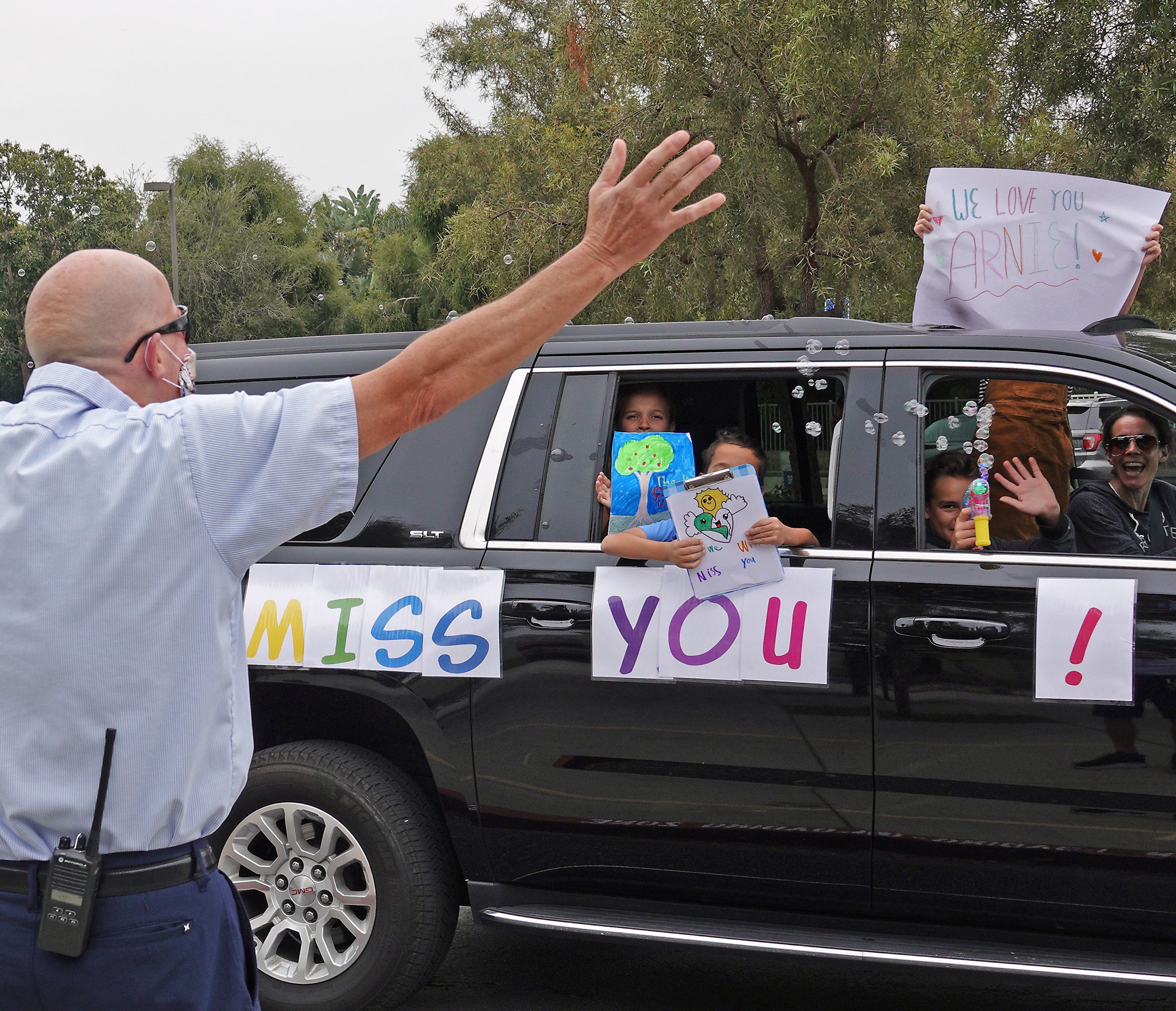 He’s been head custodian at San Clemente’s Vista del Mar elementary and middle schools since the campus opened in 2003. He figured he could say goodbye to 1,650 students at the conclusion of his final spring semester, upon turning 60.

Then a worldwide pandemic forced the school to shut down. How would students ever be able to bid farewell to their popular surfing custodian?

On Thursday, April 30, during what would have been his lunch hour, the custodian stood along the campus sidewalk, wearing a mask, his arms outstretched in imaginary embraces, as car after car entered a near-empty school parking lot and drove up to him. Each family, approaching him at intervals, greeted him with colorful signs, placards, balloons, farewell cards and words of affection.

“I was just overwhelmed,” he said afterward. “To have them come by and say goodbye to me just meant the world to me.”

The current generation of Vista del Mar students knows Arnie Smith as an ever-cheerful custodian who clearly loves what he does and who occasionally has shared stories about surf trips he and wife Jenny take to exotic beaches from Puerto Rico to the Indian Ocean’s Maldive Islands.

“SURF ON, ARNIE!” declared one of the banners presented to him.

A FEW YEARS BACK

What most of today’s students don’t realize is that their surfing custodian used to be widely known on campus for something else.

He’s competed in 12 marathons. During his years at Marco Forster Middle School, before coming to Vista del Mar, he helped run Marco Forster’s running club. He assisted teachers who would invite students every September to sign up to train for something that many couldn’t believe was achievable—run a 26.2-mile marathon.

Students were encouraged, first, to run a mile. Realizing they could do that—and build upon it—they would expand their horizons, step by step.

By spring, when they lined up at the starting line of the Los Angeles Marathon, students were ready. A few would run with a parent who was already a marathoner or had decided to give it a try, train and stride alongside their child in L.A.

Some students ran for a favorite charity. For some, it was life-changing.

A CHANGE IN DIRECTION

Students Run L.A. lives on at VDM, having continued to thrive after Arnie Smith’s mentorship ended in 2011. He recently got married to a marathoner who had come knocking on his door one day, looking for a surf lesson.

Jenny Smith, who has completed 33 marathons, ran her final three with Arnie. Then the two of them turned to surfing as their shared passion.

A 1978 graduate of San Clemente High, Arnie Smith honed his wave-riding skills alongside talented surfers Kurt Ziegler, Gary Ziegler, Marty Blanda and Brian Clark. He was a “204” local, residing right up the street. His house on Avenida Aragon was next to Las Palmas Elementary School.

“I always want to say that I taught them everything they know,” Arnie said with a smirk.

Vern Smith, the surfers’ father, was a CUSD custodian for 36 years, mostly at Shorecliffs Middle School, where he worked from Shorecliffs’ opening day until his retirement.

In his youth, he would marvel at how many students would recognize and greet his dad around town.

Arnie was inspired, in 1990, to emulate his father.

“I walked into Dana Hills High School with a goatee, a mustache and long hair,” he recalled. “I asked them what do we need to do—we’re cleaning a school—and away I went.”

After stints there and at Marco Forster, he arrived at VDM to repeat what genial Vern Smith, now 85, had meant to Shorecliffs.

“We are going to start training in June,” said Jenny, who still runs shorter distances but insists her marathon days are over. She will coach Arnie.