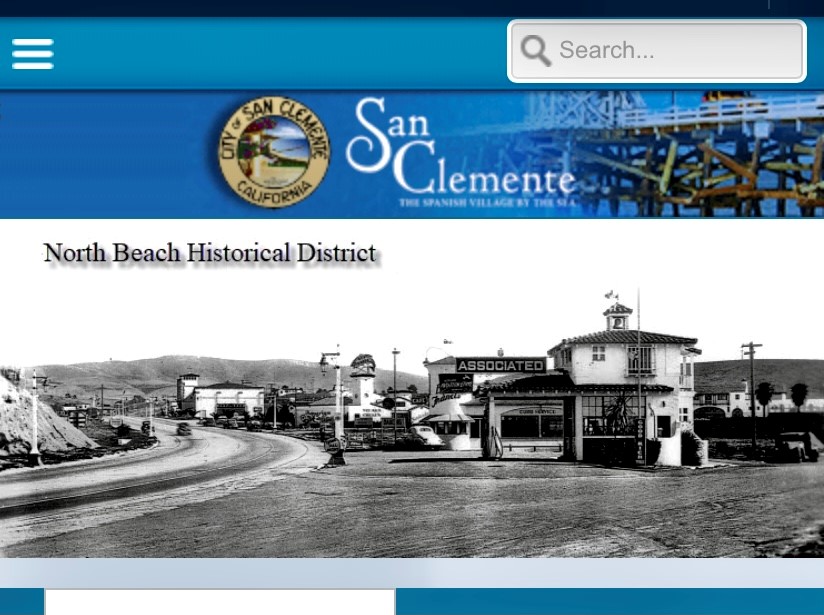 The next time you visit the city’s homepage at san-clemente.org, fix your eyes on some details in a large historic photo.

It evokes the northern entrance to San Clemente, sometime around 1940.

Imagine you are driving into town, along a broad, four-lane, Highway 101 with an empty lane in the middle. Well ahead of you, most of the landscape well is vacant.

Up close, you’re looking at the Associated Oil Company’s filling station, Boyd & Frances’ Cafe, the Aquarium Restaurant and the San Clemente Theatre. Notice that a bowling alley didn’t yet exist, in front of the movie theater.

And, look here, no 7-Eleven at Pico and El Camino Real!

Who knew, then, that some 80 years later, this area bounded by El Camino Real, Avenida Estacion and Boca de la Playa would be designated by the National Park Service as San Clemente’s North Beach Historic District?

On the city’s homepage, click on the large photo. You’ll open up a selection of photos and historic tales. There’s an aerial photo of the district. Then learn more about landmark buildings—the San Clemente Beach Club, Casino ballroom, San Clemente Theatre (later known as the Miramar), San Clemente Bowling Center and the Aquarium Restaurant.

The Associated gas station and Boyd & Frances’ Cafe are long gone. The bowling alley was recently leveled. It couldn’t be repaired in place, next door to the cinema building being renovated as an events center. The former bowling building will be rebuilt, incorporating the original building’s elegant wooden ceiling beams into a new food court.

Who put the page together?

What’s the purpose of the page?

Lightfoot: We launched the page in February, coordinated with a presentation to city council that I did alongside Larry Culbertson (president of the San Clemente Historical Society) to announce the successful listing of the district with the National Register.

What’s the status of your North Beach Historic District efforts?

Lightfoot: The nomination was successful. The National Park Service listed the North Beach Historic District on the National Register of Historic Places in December 2020.

What’s the next step?

Lightfoot: Community Development and myself are working with active development projects in North Beach—including reconstruction of the bowling alley as part of the larger theater rehabilitation, assisting a new tenant (Landers) that is moving into the former OC Fresca/Ichibiri restaurant building at 1814 N. El Camino Real, and reviewing construction plans for Beach Hut Deli. Our first priority is to support full tenancy in the district.

Lightfoot: Our next effort, already underway, is to seek out quotes for signage to help visitors recognize the historic district. I am hoping to place some sign considerations into this year’s budget review.

Will there be other public improvements?

Lightfoot: The third step is to undertake some additional planning efforts for the area. Staff would like to continue to pursue pedestrian improvements in this space and to improve the connections between the train, trolley, historic buildings and beach trail, so that the district will have an improved “sense of place” for visitors and residents.

What vision is being developed for North Beach?

Lightfoot: Some additional planning efforts are needed before we identify Capital Improvement Project improvements. I have a meeting with the Southern California Association of Governments’ staff to discuss a potential vision plan.

Several years ago, there was talk of making it safer for bicyclists to navigate Avenida Pico to North Beach from points inland off I-5. Anything new on that?

Lightfoot: The City’s Bicycle and Pedestrian Master Plan indicates that a high priority project is improving bike access along Pico between Vera Cruz and North Beach. Public Works is working on developing plans for at least a portion of this stretch.

Are any economic development projects being processed in the area? I recall one longstanding application called The Gallery, going back three decades at Pico and ECR, across from the car wash.

Lightfoot: The Gallery project has not been active. But the architect on that project did indicate that they intend to submit some updated plans for consideration.

Is anything in the works for the city’s vacant lot at 1832 N. El Camino Real?

Lightfoot: The city’s lot is somewhat encumbered for future supportive parking, depending on the increase in demand from full tenancy in North Beach, including an operational Miramar site.

This historic district packs lots of history into the space.

Lightfoot: The city’s historic district nomination forms tell the story of the district, beginning with Ole Hanson’s vision of the space as a welcoming gateway, with a public pool, lawns and a dance pavilion. Many of San Clemente’s first visitors arrived by train at the North Beach depot. The vision shifted, but the focus of an entertainment and recreation center remained.

How did Ole’s vision shift?

Lightfoot: The Beach Club hosted the U.S. Olympic swimming team tryouts the year it was built (1928), bringing immediate attention to the city. Nearly a decade later, the Casino opened its doors to more than 5,000 guests and hosted stars like Judy Garland along the way. The San Clemente Theater followed in 1938, designed by well-known architect Clifford Balch. Its bowling alley partner arrived in 1946. By then, the area had become known as the city’s “amusement center.” Even neighboring businesses were affected by the entertainment emphasis. The Aquarium Café (more recently Ichibiri’s Restaurant), included a small dance floor surrounded by large aquariums.

How does this relate to the newly designated historic district?

Lightfoot: For decades, the area was the hub of social activity in San Clemente. And now, a string of rehabilitation projects (Casino, 2009; Beach Club, 2016; Aquarium Café building, 2019; Miramar, 2021) is bringing the district back to life again.