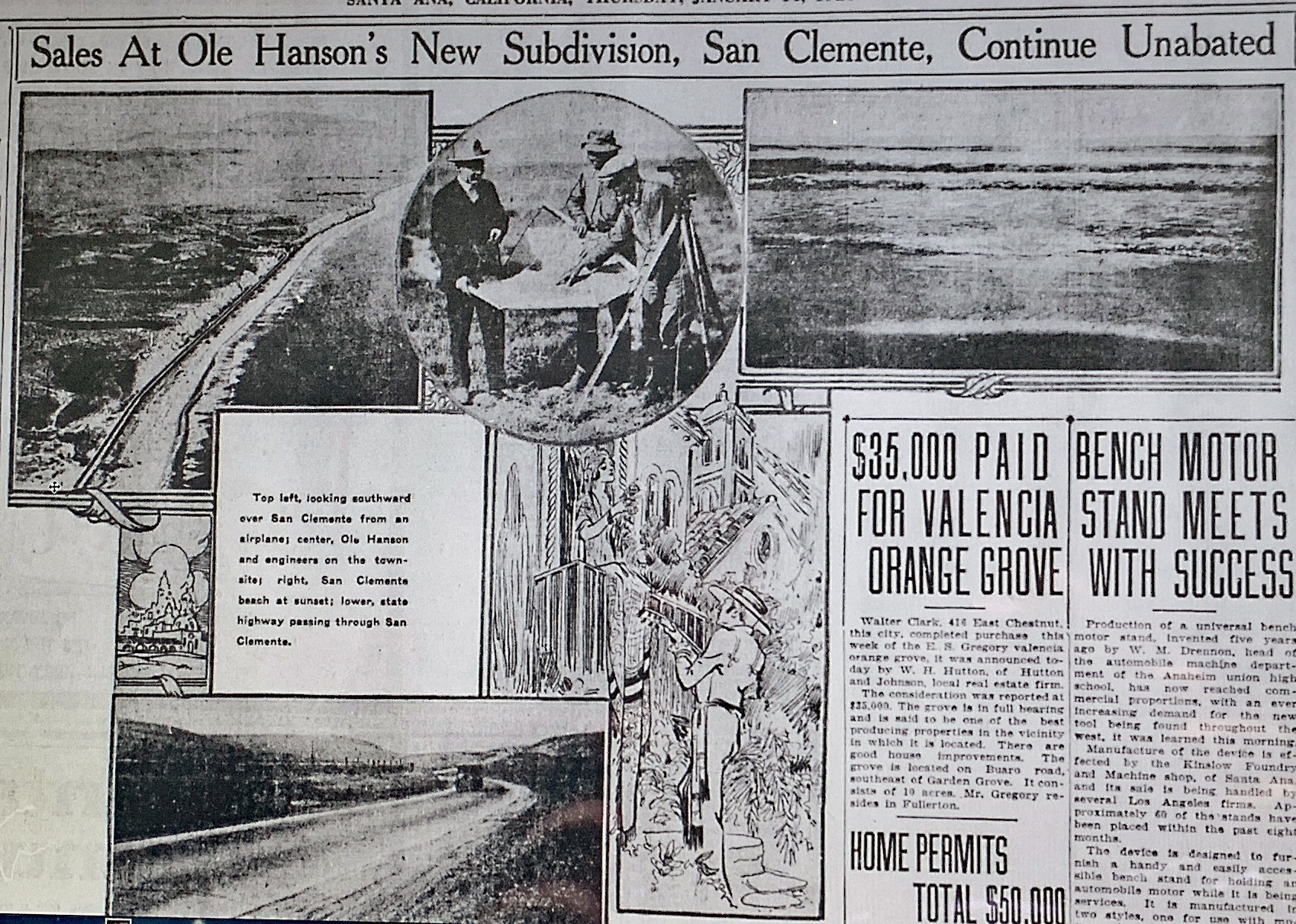 Sunday will mark the 95th anniversary of San Clemente.

On a rainy Sunday, Dec. 6, 1925, founder Ole Hanson and his investors opened a cavernous sales tent on barren land that would become downtown San Clemente.

They offered a free lunch, hoping to attract people with ready cash willing to drive from Los Angeles or San Diego and listen to Hanson’s sales pitch.

A nationally known orator, Hanson would tell onlookers he was creating an idyllic place by the sea where lot purchasers could build a weekend cottage or a house in which to live like no other place in America.

The Spanish Village, he called it, asking buyers to invest, as well as to build right away to help establish a live, vibrant village.

It was a huge gamble. The initial townsite was barren ground 5 miles long by over 1 mile wide, a lonely location halfway between Los Angeles and San Diego.

Hanson promised a master-planned community with infrastructures and amenities, designed to emulate what a coastal village in Spain might look like if transplanted in America.

He would ask everyone to imagine meandering streets dotted with buildings of creamy white stucco and red tile roofs, trees, flowers, parks, equestrian trails and sandy beach. There would be no ramshackle wooden structures.

But was Ole Hanson’s vision viable, sprouting from scratch in the middle of nowhere?

“People drove along the highway and spoke of San Clemente as a dream and of Hanson as crazy,” wrote Homer Banks, author of The Story of San Clemente. “But the crazy man went ahead.”

The first 300 lots were for sale: $500 to $700 each. Buyers would become owners of a stylish social clubhouse and a sandy beach 1,000 feet long. In all, 5 miles of bathing beach would be “preserved from defilement forever.”

“In addition, there will be built a children’s playground, tennis courts, handball courts, and lengthy bridle trails,” The Santa Ana Register reported. “Swimming from the wide sandy beach out into the shallow surf, declared to be without a vestige of undertow, will always be a major attraction. Still another feature will be the fishing barge, anchored off San Clemente beach, long a much-sought spot by surf fishing enthusiasts.”

Hanson pledged to offer the county 500 feet of public beach, “access without paying a toll,” he told The Register.

That first day, 1,000 people “toured the soggy property,” author Doris Walker wrote in The Heritage of San Clemente. Planners of the nonexistent town sold $125,000 worth of lots on faith that Hanson and his team would produce as promised.

He would build a school for San Clemente. Other amenities would include an Old Spanish Plaza, a fishing pier, golf course, beach club pool and a riding academy.

In researching this story, I came across a 1925 newspaper ad announcing the Dec. 6 opening. A discreet detail in the ad hit me like a sucker punch.

“San Clemente has perpetual race restrictions,” it disclosed, “and every house, be it a two-room loafing place or a mansion, must be of Spanish design, and exterior plans are inspected free by our architect.”

I already knew about early San Clemente’s Caucasian-only deed restriction. But seeing it in print, as if I were living in 1925, made me glad I wasn’t living then, an era of racial segregation and exclusionary practices in California and across the country.

I did a search about racial deed restrictions. They were nothing new. I learned they dated back to 1892 in California.

A magazine article titled “The Origins and Diffusion of Racial Restrictive Covenants” chronicled how the practice—together with other varieties of exclusion and discrimination—expanded across America through the early 1900s and became self-perpetuating.

In 1924, the article said, the National Association of Real Estate Boards, which for years had supported covenants, issued a code of ethics.

It decreed that a realtor should never be instrumental in introducing any “character of property, occupancy, members of any race or nationality or any individuals whose presence will clearly be detrimental to property values in a neighborhood.”

The article said “real estate boards could and did expel or ostracize members who did not keep to the code. Expulsion had very real costs.”

It wasn’t until 1948 that the Supreme Court struck down such racial restrictive covenants.

So, this wasn’t an Ole innovation, although he and his investment team, at the very least, went along with the practice. How did Ole feel about it? I found no indications in press coverage that I searched at newspaperarchive.com.

On the other hand, given the pervasiveness of the deed-restriction practice, I had to wonder, wouldn’t trying to buck it be suicidal to the development project in a segregated society overwhelmingly Caucasian?

There was no mention of racial deed restrictions in subsequent San Clemente newspaper ads I examined. Nor did newspaper articles I read about early San Clemente’s progress make issue of the racial restriction, although a few mentioned it.

What Hanson and San Clemente gained notoriety for was the striking growth and success of the Spanish Village experiment through its first four years, until the stock market crash of 1929 toppled America’s economy.

During explosive growth in the 1970s, grassroots local efforts set out to preserve San Clemente’s historic buildings and Spanish Village heritage. Today, in a city of 65,000, many San Clementeans cherish their “Spanish Village by the Sea.”

In 1975, the city council proclaimed Dec. 6 each year to be Ole Hanson Day, a testament to what was unique about early San Clemente—a master-planned Spanish-replica beach town with village character and an abundance of amenities.

Those qualities are the uniqueness—the legacy that endures today—not the painful infliction of exclusionary deeds our nation thankfully has repudiated.