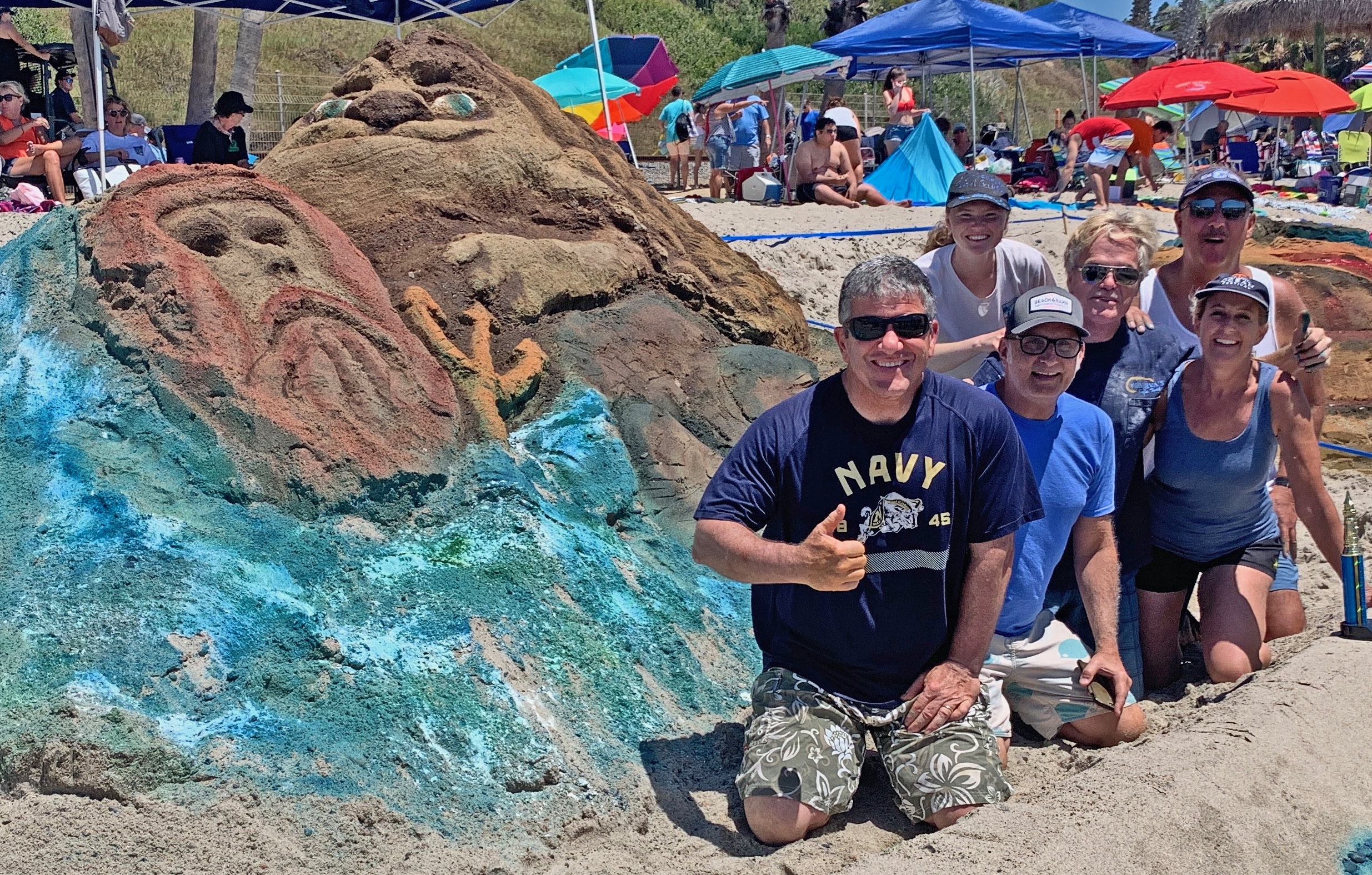 Every summer, neighbors who live up and down Avenida Alessandro in San Clemente unite at the Ocean Festival to create something special out of sand.

Nearly every year, it’s some sort of colorful critter—or critters, including this year’s image of The Lion King and King Neptune, united in a sculpture titled “Kings of Surf and Turf.”

“The two kings are coming together in the Circle of Life,” team member Cheryl Moe said. “They are joining surf and turf together.”

As usual, the Alessandro Sand Sculptors won an award for Sunday’s crowd-pleaser. They’ve won awards regularly for the past 24 years at the Ocean Festival.

Their selection of subject for this year is hardly surprising. The 2019 Ocean Festival coincided with a blockbuster weekend opening of Walt Disney Company’s The Lion King—a remake of a 1994 movie megahit—in theaters nationwide.

How was it decided? “We usually have a party Friday night, and we drink a couple of margaritas, and we come up with some ideas,” said Steve Wallace, leader of the team.

“Usually the night before, it kind of morphs,” he said. “And during the day (Sunday), when we start with a big pile of dirt—probably about 10 cubic yards—it morphs into something. Nothing is really set in stone.”

Moe, who has been a member of this spontaneous, free-thinking team for 16 years, said previous years’ caricatures have ranged from The Hulk to Dory, the fish.

Team Alessandro’s 2017 sculpture was titled “Wonder Woman Saves San Clemente.” Another year brought to life a sea monster that the team said was based on a San Clemente Island legend. The next year was “The Gnome Ranger and Tonto.”

So why no sand castles?

“This is way more fun than architecture,” Moe said with a grin. (By the way, she is an architect.) “And you know why? No permits! The crowd loves it! And then you destroy it, and there’s no liability. Where could you go wrong?”

Well, actually, in 2010 the Alessandro Sand Sculptors did sculpt a castle of sorts, a “San Clemente Surf Shack,” but it was fully cartoonish—sort of Gingerbread meets Beach. It was fun.

This year’s Ocean Festival had six sand sculptures, and every team took on the challenges of San Clemente beach erosion: dwindling sand space, large fields of cobblestones and small rocks to dig out of the sand that teams had to work with. Teams all found workable patches of sand.

“We had a great spot,” said Erin Davidson, a member of Team Eisenbeisz, which has sculpted sand at the Ocean Festival for 34 years.

“We had hardly any rocks,” Davidson said. In fact, she said, team members had to go fetch rocks to spell out the title of the sculpture, “Don’t Pout, You’re at the Beach.”

The sculpture was a colorful fish, based on a children’s book called The Pout-Pout Fish, “about a fish that’s very pouty,” Davidson said.

Dan Hoon, a San Clemente resident with BrightView, a landscape design firm, put together a team of 10 Irvine landscape architects and interns to create a sea turtle with eggs.

“The group went and planned this out, ahead of time, and created a 3D printed model as a guide,” he said.