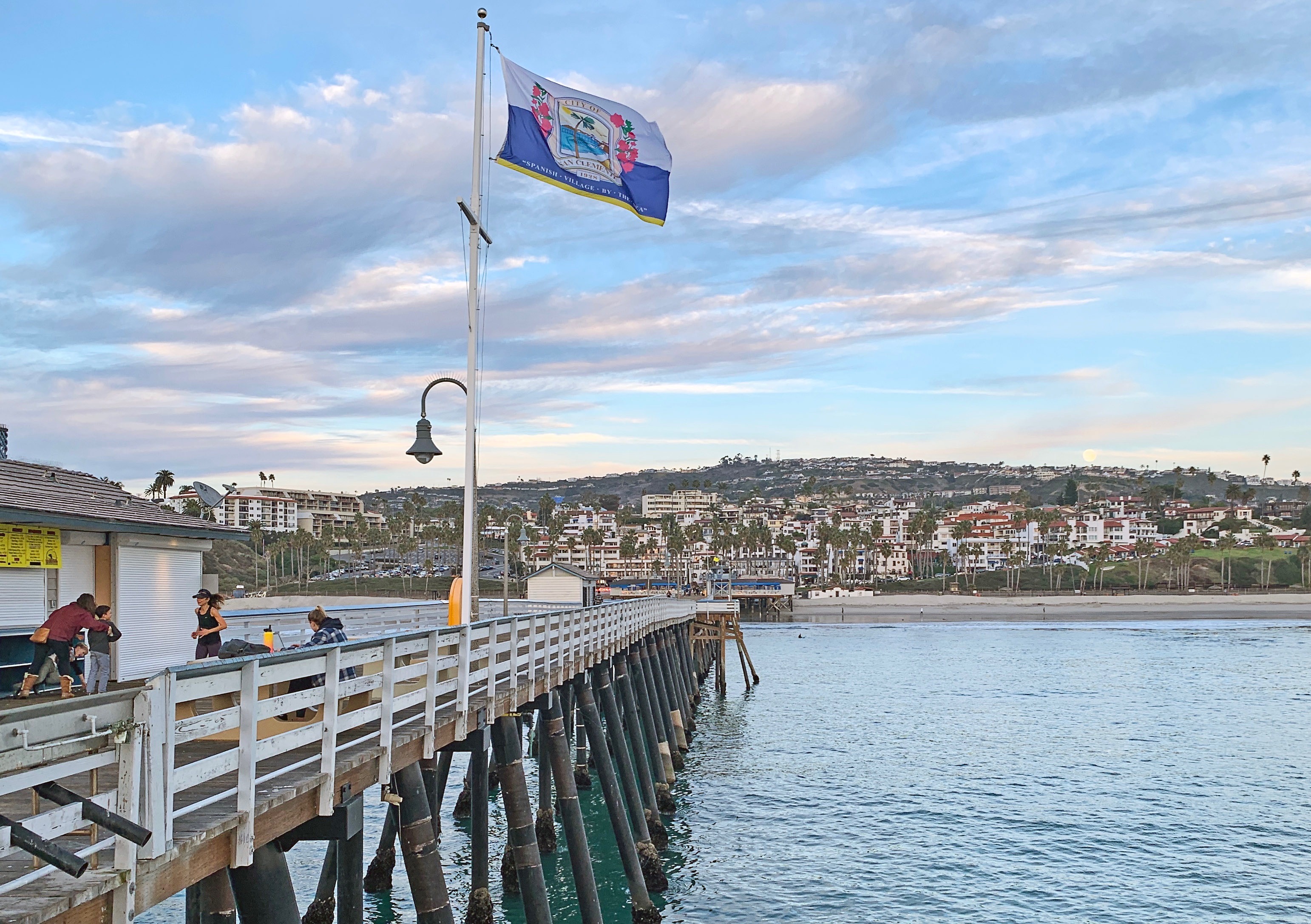 UPDATE: The city recently began flying its flag at the end of the San Clemente Pier.

Below is the full story from Fred Swegles, originally published Nov. 21.

How nice would it be if we could see an American flag flying from the end of the pier?

A gleaming, 28-foot-tall flagpole has been there since June 12. Chances are, you’ve never seen a flag flying from it.

Liam Hallinan, 15, renovated the end of the pier’s old flagpole as his Eagle Scout project, erecting it with assistance from the city’s contractor, Stewart & Associates. The flag and flagpole key were turned over to Scott Shipley, then the operator of a concession stand opposite the flagpole.

He raised the flag at the outset, but then he moved to Texas, transferring the Pier Grill concession to a new operator. She reported that raising the flag was difficult for her.

Over the years, I’ve enjoyed seeing the flag fly there. It was pretty, it was photogenic, and it let me know when the pier concession was open, since the concessionaire raised the flag. But if that’s a physical hardship, I can understand it.

The Hallinans, hoping to see Liam’s project to fruition, asked the city if San Clemente lifeguards could raise and lower the flag, or maybe the person who locks and unlocks a restroom out on the pier. The city, after considering it, decided that it wasn’t a function that lifeguards or maintenance were prepared to take on.

The flag and the flagpole key were returned to Liam.

Samantha Wylie, city recreation manager, explained that the city already has an American flag on the pier, raised and lowered daily by lifeguards atop their tower. She pointed out that when Liam asked city permission for his Eagle project, concessionaire Shipley “was on board” to raise and lower the flag. But things changed.

She wondered if Liam might consider instead flying San Clemente’s official flag. It wouldn’t need to be raised and lowered daily, like an American flag would.

Liam said he would think about it. But he also said he was overwhelmed by the positive public response in June after Shipley posted a video of his American flag being raised. It drew 5.9K views, 680 likes and an outpouring of supportive comments on Facebook that he was pleased to read.

The Hallinans said they recently asked for ideas from the PierPride Foundation, which, after discussing it, suggested maybe Scout troops could organize volunteers.

Liam’s mom, Tracy, was wary there would be too many pitfalls for that solution to be viable.

Someone mentioned my name to the Hallinans, suggesting to see if I had any ideas. My first thought was that there are some locals who walk the pier every morning, and they might be happy to hoist the flag. A group has coffee there every morning. Then again, would we also be able to find a group that walks the pier daily, at dusk, to lower the flag? Hmm, putting something like that together sounds iffy.

What about just attaching a small LED light to the pole so the Red, White and Blue could fly illuminated, 24/7?

Julie Rooker from PierPride told me that is probably the best long-term solution, maybe using a solar-powered light.

Liam said he likes the idea, and his research for the Eagle Scout project actually found a small, unobtrusive light that’s available with a 10-year battery. But he said the city advised him that installing a light would change his Eagle project from a simple “like for like” restoration of a preexisting flagpole into an addition to the flagpole, triggering more regulatory hoops.

When I met with the Hallinans on the pier Sunday, Tracy Hallinan speculated that might mean the California Coastal Commission getting involved. Liam said no, his recollection was that it meant San Clemente Historical Society approval, plus city council.

I asked Larry Culbertson, president of the Historical Society, and he said the society doesn’t hold a review role for the pier. He likes the idea of seeing an illuminated American flag flying from the end of the pier.

Asked about the review question, Samantha Wylie confirmed Monday that she had consulted city planning staff, which had opined that Coastal Commission permission would likely be required. That could entail substantial time and effort.

The city didn’t pursue it further, because Liam needed to complete his project, and it seemed the concession stand was prepared to raise and lower the flag.

Culbertson suggested, at this point, why not just put up a small, unobtrusive light, let the American flag shine and be done with it? If the Coastal Commission objects, then the commission could tell the city to take it down.

Of course, that could put the city in an awkward position.

“I just hope that whatever resolution this comes to, everyone will be happy,” Liam said.