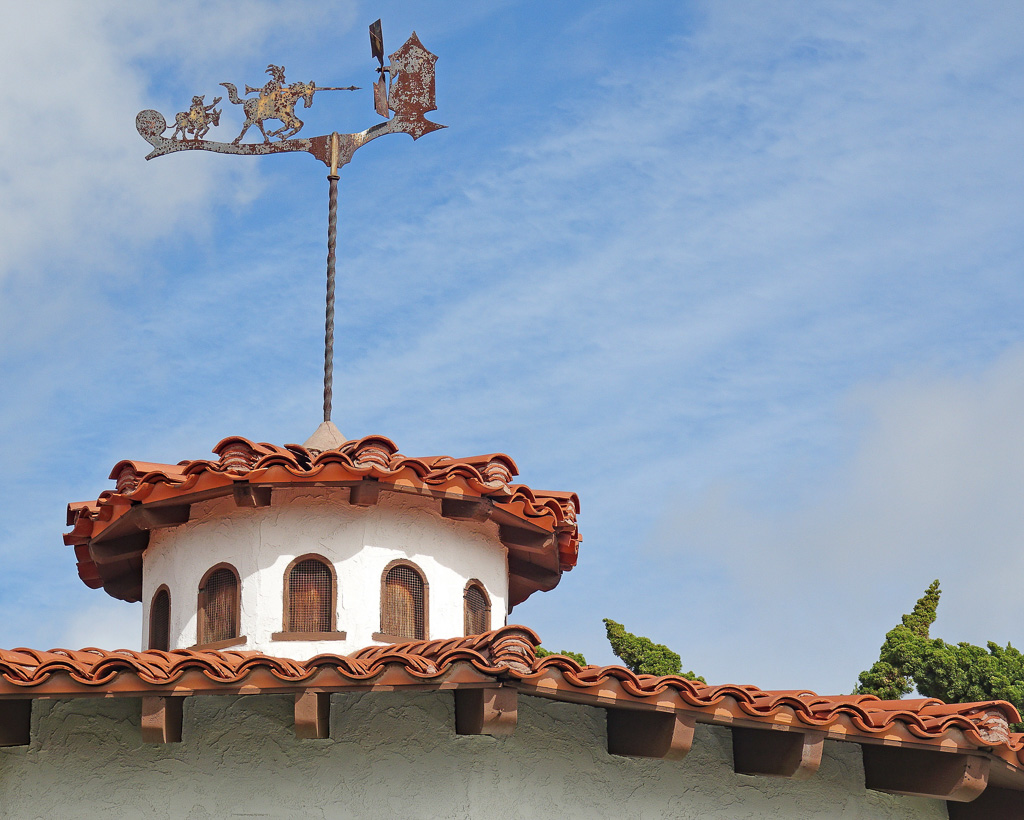 CoastLines: The Man Who Harnessed the Wind

Have you ever set out on horseback in search of windmills in the tradition of Don Quixote, the fictitious Spanish nobleman who stood up for chivalry in Miguel de Cervantes’ 1605 literary classic?

I set out recently, on my bicycle, exploring the streets of old town San Clemente in search of historic buildings that have a windmill of sorts—a weathervane—on the roof.

I would spot an Ole Hanson-era building here, another there, wondering what it was like to live here when these white-stucco homes with red-tile roofs, widely scattered, were the only houses in town.

What inspired my search was the Historical Society’s new replica weathervane atop the Ole Hanson Beach Club, landmark home of the municipal pool that Ole built for his town.

An original weathervane there was lost decades ago. Thanks to surviving photographs and the Historical Society’s initiative, the metallic depiction of a fair maiden diving into the water will live again.

I decided to see what other weathervanes I could find. I pedaled first to the Community Center, where my favorite San Clemente weathervane is an image of delusional Don Quixote, with his humble confidant, Sancho Panza, riding a donkey behind him, poised to attack an imaginary enemy, a windmill.

I wonder if Ole, who in 1925 realized a dream of creating a Spanish village by the sea in California, ever visited the Spanish village of San Clemente located in La Mancha, the region immortalized by Cervantes.

Our namesake town in La Mancha has an assortment of weathervanes. One, atop the church, is a knight gallantly advancing, spear forward, on horseback.

The image isn’t Quixote-specific, like our weathervane. The medieval town proudly displays its Cervantes heritage at the entrance to “San Clemente, a Place in La Mancha,” with Don Quixote and Sancho, pictured on signs, welcoming visitors.

In our own San Clemente, Ole Hanson’s Don Quixote weathervane survived a 1971 fire that destroyed most of the social clubhouse he had built in 1927 for his village. Sadly, the weathervane today, atop a rebuilt Community Center, looks to be seriously corroded.

Happily, the Historical Society’s president, Larry Culbertson, says restoring the vane could be the society’s next project.

My bike ride then led me to Casa Romantica, the home Ole Hanson built in 1927 for his family on Avenida Granada. Its well-preserved weathervane depicts a dragon-headed ship.

This writer's favorite San Clemente weathervane shows Don Quixote and Sancho Panza attacking a windmill atop the San Clemente Community Center. Looks as if it could use some TLC.

This weathervane of a witch on a broomstick is on a cottage across from the Casino San Clemente. Photo: Fred Swegles

This writer's favorite San Clemente weathervane shows Don Quixote and Sancho Panza attacking a windmill atop the San Clemente Community Center. Looks as if it could use some TLC.

The former municipal building in the central plaza of San Clemente in Cuenca Province, Spain, is now an art museum, with an artful weathervane on top.

This weather-watching pooch strides atop a cottage along Cazador Lane.

The medieval village of San Clemente in Spain's 'La Mancha' region has a variety of weathervanes. The one atop the church in the Plaza Mayor displays a knight in shining armor. Could this have inspired Ole Hanson?

Casa Romantica's nicely preserved weathervane is a ship that appears to have a dragon body.

I pedaled over to a wonderful Hanson-era home along Buena Vista, where I remembered photographing, long ago, a festive musical weathervane. The N, E, S, W markers survive today but, sadly, not the artistry on top.

Across the street from the Ole Hanson Beach Club, the landmark Casino San Clemente has a pedestal atop its dome. Was there ever a weathervane?

Next door, San Clemente’s shuttered 1938 movie theater has a pedestal on top. I found a photo of a weathervane that once was there.

Across the street, atop a vintage Ole cottage, is a witch on a broomstick. Wicked!

Across an alley from that, along El Camino Real, is an artful whale. I photographed it, only to discover the building isn’t on San Clemente’s historic list.

Over several days, I rode street to street, delighting each time I’d spot an “Ole.”

Most homes are easy to pick out, but some modern faux Ole Hansons look so authentic, it’s hard to tell they are not. One is Larry Culbertson’s house on Avenida Rosa. It has a fun-looking dragon weathervane. The building looks exquisite, in the Ole tradition. But not an old-school Ole.

From block to block, I found myself thinking,“Yes, No, Maybe.” It was fun.

Some Ole Hansons are obvious. Others were modified or added onto, over decades—a few of them not so nicely. Many have been authentically restored, with love. I wonder how many were torn down before Oles gained stature as treasures and the city acted to protect them.

Only a few Oles today have weathervanes. I found a few with pedestals on top.

Thumbing through some pictures of early San Clemente, I looked for buildings with weathervanes now missing. The cinema is one. Another is San Clemente’s first building, Ole Hanson’s 1926 real estate office. Today it’s a Baskin-Robbins store.

Culbertson found a picture of the vane in all of its glory, a Spanish galleon at sea under full sail. This would have been San Clemente’s first weathervane and with it, Ole made a statement.

Fred Swegles is a longtime San Clemente resident with more than 48 years of reporting experience in the city.