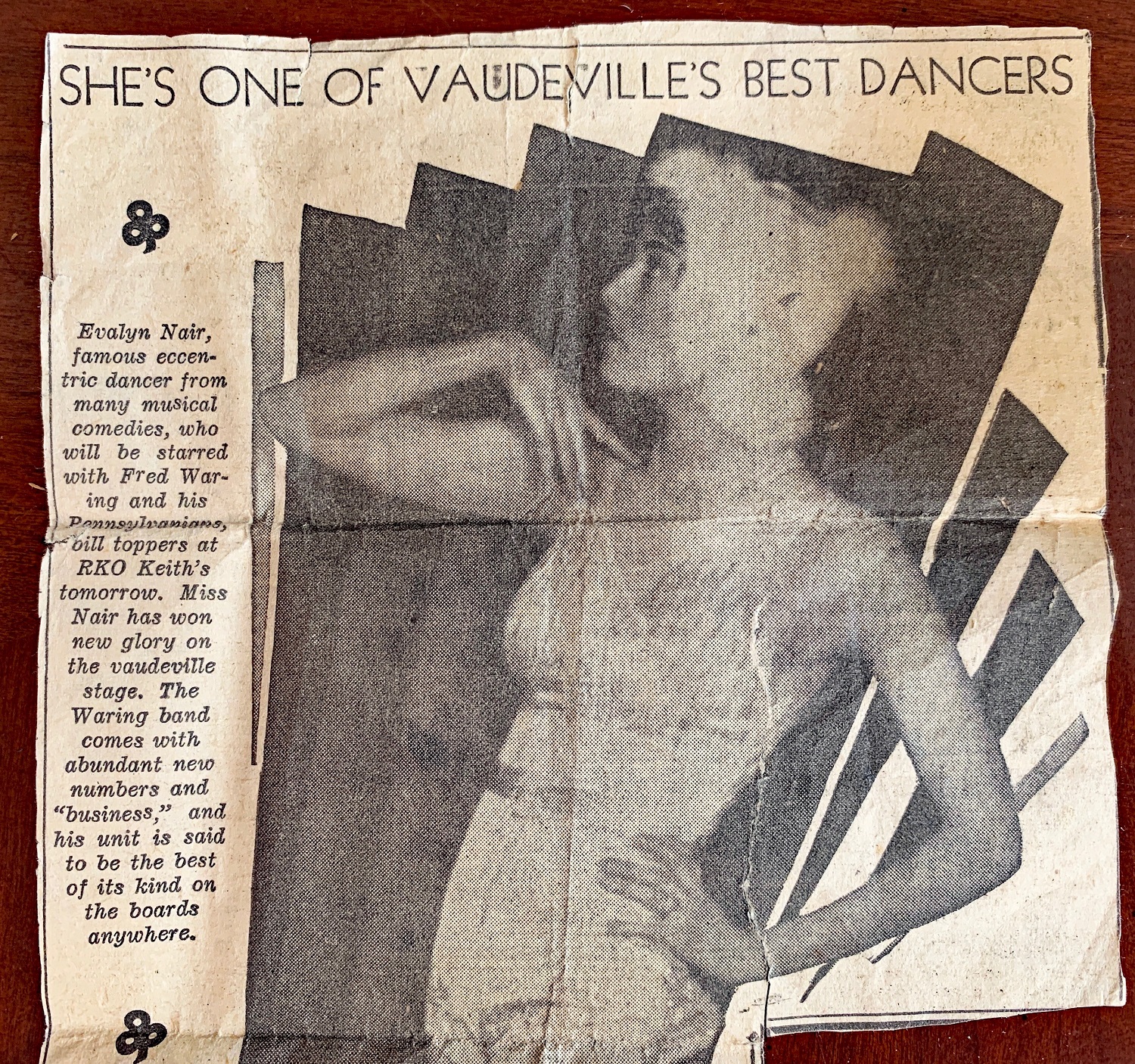 CoastLines: Memories of My Aunt Evalyn and Her Historic House

Here’s a little-known story about a San Clemente gem.

Casa Romantica is widely known as the elegant home that San Clemente founder Ole Hanson built for his family in 1927-28.

My memories are hazy. I was just 4 years old when, I’m told, she purchased the Casa in 1952 for $68,000. It wasn’t far from my house on Avenida Esplanade. I visited her at Casa Romantica.

Aunt Evalyn was born Evalyn Nair in 1910. She grew up in Eagle Rock, emerging as a talented dancer who performed in musicals, in vaudeville and ultimately as a headliner with one of America’s most popular orchestras, Fred Waring and His Pennsylvanians.

In 1933, Fred and Evalyn were married. His music flourished. The Warings’ children—Dixie, Fred Jr. and Bill—grew up in Shawnee on Delaware in Pennsylvania, where the family-owned a house, a golf course and the Shawnee Inn resort.

Over time, marital problems developed, Evalyn filed for separation and moved to San Clemente, where her parents lived in the 1940s and ’50s.

Casa Romantica wasn’t new to her. She had first visited in the 1920s, escorted by dance partner Bill Hanson, one of Ole Hanson’s sons.

“Bill and I were in a show in Hollywood,” she told me in 2003. “His father had just bought some property. He wanted to show it to me. He told me it was going to be a beautiful building. I couldn’t wait to see it. Bill took me down there after (Ole) finished building the first part of the house. I never dreamed I would live there.”

That came to be in 1952. My cousins—then teenagers, growing up in Shawnee—would spend part of their summer there, part of it in San Clemente.

Bill remembers “the best of both worlds.”

“It was a wonderful family resort,” he described Shawnee Inn. “(Father) had a big pool and lots of things for kids to do. He’d hired a Hopi Indian named White Bear, who taught kids to make lanyards and beads and shoot arrows. There was a merry-go-round, seesaws.”

San Clemente was, for the teens, a new world—the ocean, a beach town, fishing on the pier, new tastes.

“I had my first California hamburger, my first hamburger with ketchup and mustard,” Bill said. “It was delicious.” At a restaurant in Capistrano Beach, he tried his first Mexican food. He was hooked.

The elegant Rasmussen estate was next to the Casa. “Barbara Rasmussen, next door, was my age,” Bill said. “I was in love with her, but never touched her. She was just the girl next door. I was scared of girls. I was 14. She was beautiful and sweet. I only went over to her house once. It was so lovely. It’s so terrible it was (later) torn down.”

Bill remembers accompanying brother Fred in his convertible. “We were driving down the main highway through town,” Bill said. “It was probably a Saturday, and The Star-Spangled Banner starts playing on his radio (a sports event). He stopped the car, got out and saluted. He just got out and saluted for about 10 seconds; it was just silly.”

Fred Jr. grew up to be a talented musician with his own combo. Fred Sr. released a “Two Sides of Fred Waring” album, featuring the two of them.

Today, Fred Jr. lives in Austin, Texas, Dixie in Shawnee, Bill in Palm Desert. I was named after Uncle Fred. Fifteen years ago, I unexpectedly discovered his star on the Hollywood Walk of Fame. I also know a street that’s named for him in Palm Desert.

Bill remembers the spectacular ocean view from Casa Romantica’s lawn. He dubiously got to “enjoy” the view while watering. “Mother made me do that every few days,” he said.

A newspaper clipping highlights Evalyn Nair as a star dancer with Fred Waring and His Pennsylvanians, prior to her 1933 marriage to the famed bandleader. News clipping photo taken from a family album

Evalyn Waring is pictured in the 1950s in San Clemente's Casa Romantica, which she owned from 1952 to 1956. During that period, she was the estranged wife of bandleader Fred Waring. Photo: Courtesy of the family

As an up-and-coming dance star, Evalyn Nair became known for her acrobatics and her high-kick technique. News clipping photo taken from a family album

A Chicago news clipping reports the 1933 marriage of bandleader Fred Waring and Evalyn Nair, headline dancer with the orchestra who, two decades later, would own and occupy the elegant Casa Romantica landmark in San Clemente. News clipping photo taken from a family album

Bandleader Fred Waring and wife Evalyn are pictured during a happy time, one winter day in the early 1940s, outside their Pennsylvania home with their children, from left, Fred, Jr., Dixie and Bill. Photo: Courtesy of the family

Evalyn Santiago is pictured in 2003 with early photos of her, dancing with Ramiro Santiago. She achieved nationwide fame dancing in musicals, vaudeville and eventually as headline dancer with one of America's most popular orchestras, Fred Waring and his Pennsylvanians. Photo: Fred Swegles

Bob Hartley, a summer friend, lived along a canyon north of the Casa. “They had a small home and a pulley going across the canyon,” Bill recalled.

I can’t verify if it ever happened. The Eisenhowers and the Warings were known to vacation in Palm Springs. Cousin Bill and his siblings once visited the White House.

“Father was friends with Ike,” Bill said. “He had done some rallies for Ike. He did one at Madison Square Garden.”

The Waring teenagers sat with Mamie, chatting over Coca-Colas, then met President Eisenhower.

“We were told how to say, ‘Hello, Mr. President,’ ” Bill said. He’ll never forget how the leader of the free world, the general who had led America to win WWII, told him, this is “the God darnedest job I ever had.”

Casa Romantica was a painful period for Aunt Evalyn, going through a divorce that concluded in 1954, awarding her a substantial settlement, news reports said. Newspapers also reported the next day that Fred married Virginia Morley, a former pianist with his band.

They remained together until his passing in 1984, as he continued to perform, host his TV show and advance choral arts. Over a 50-year period, he was acclaimed as “the man who taught America how to sing”—a forerunner of today’s Glee phenomenon.

Aunt Evalyn’s story had a happy ending. Although she sold Casa Romantica in 1956 for $64,000, taking a loss, Bill told me she reconnected with Ramiro Santiago, a former dance partner. I had met him at the Casa, amazed with his handyman skills. I had thought he was the Casa’s gardener, nothing more.

He could fix anything. He fixed Aunt Evalyn’s heart.

Back then, I had no idea he’d once been a dashing young dancer and leader of his own rhumba band.

In 1956, Evalyn and Ramiro were married. They spent nearly 50 adoring years together.

In 2003, I visited them in San Marcos to alert them that Casa Romantica was being restored and would soon reopen as a showpiece cultural center.

Although Aunt Evalyn reiterated what a splendorous place the Casa had been, I couldn’t convince her to let me drive her up to San Clemente to revisit her former abode. She died in 2004, age 93.

Ramiro outlived Evalyn, but not by much. He was over 100 and, I suspect, found he couldn’t live without her.

I believe my last time seeing him, my sister Barbara and I took him to Del Mar Racetrack. He was a big fan. At the races, the gleam in his eye was again alive, like I’d remembered it to be from the first day I’d met him at Casa Romantica.