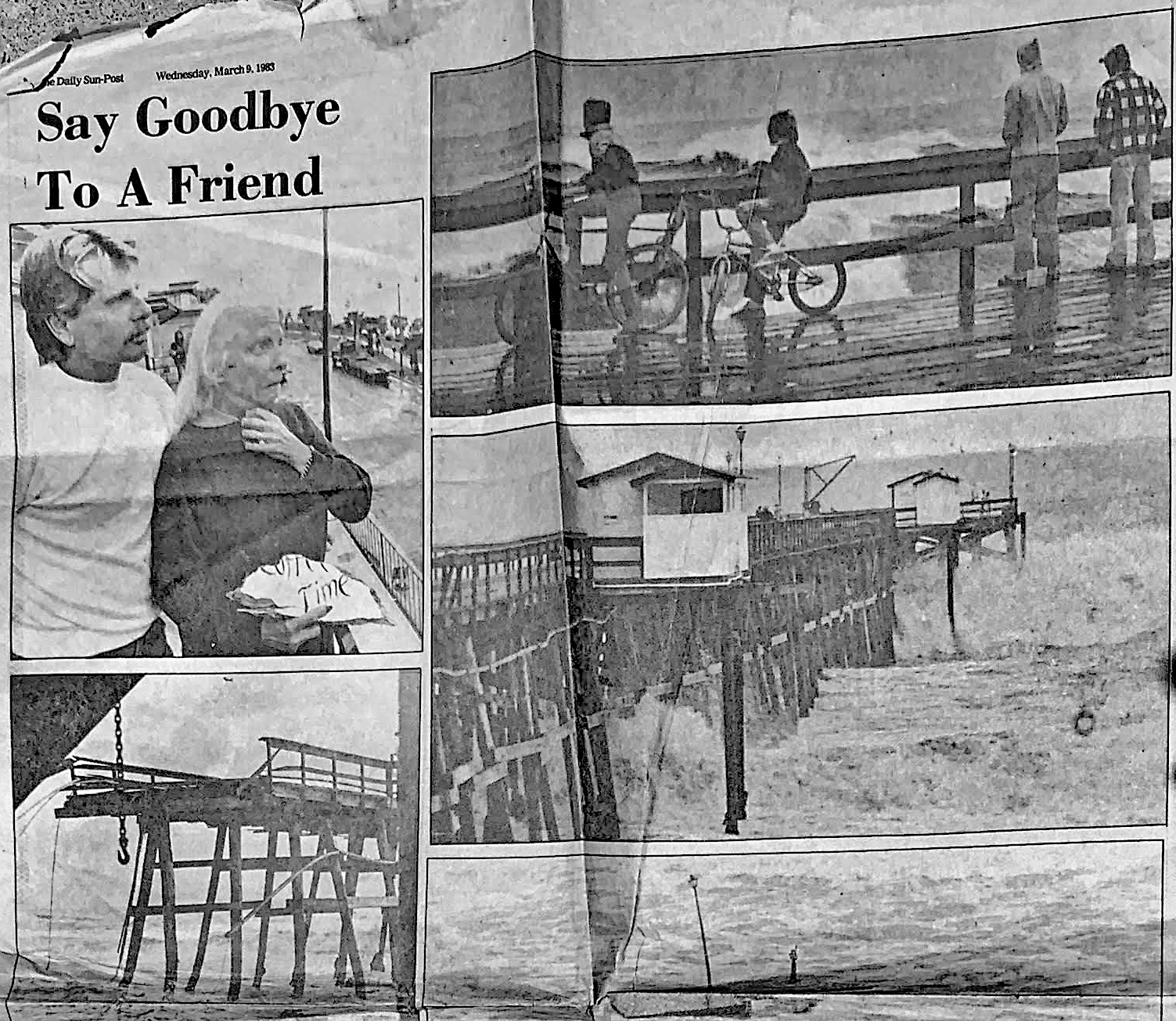 How many of us were here when the San Clemente Pier was destroyed on March 1, 1983? Here are photos from a page that I published after an ever-remembered storm.

As I mentioned to readers, the San Clemente pier built in 1928 had been destroyed in 1939 by waves from a hurricane, then was rebuilt and survived for decades until taken down again in March 1983.

My photo page featured the facial expressions of Gene Burke and Daze (Daisy) Sherrill, who had operated the concession stand at the end of the pier.

A photo atop the page shows some San Clementeans out at the end of the pier, the afternoon before the overnight destruction, and a photo of how the rest of the pier was looking, as people wondered if the structure would survive the stormy night.

Stanford Manning, my boss then and publisher of San Clemente’s five-day-a-week Daily Sun-Post, called for a Save Our Pier fundraising campaign. The town supported it, but, really, it was state and federal grants that resulted in the pier being rebuilt two years later.

Engineers designed a new end of the pier to be a bit higher in elevation than the pier closer to shore, to enable the new pier to better withstand any future storms at the end.

The idea was to help prevent waves from tearing off the pier deck at the end, and avoid pier pilings colliding with other pilings.

I wrote lots about rebuilding and reopening the pier. I’d also written about the historical September 1939 destruction of the original pier, and how the city passed a $40,000 bond in 1940 to rebuild it.

Here’s a concise description from Doris Walker’s The Heritage of San Clemente book, which describes the two piers’ dilemmas.

“Many of the pier pilings were loosened, and two entire sections—first the center, and half an hour later, the end of the pier—were thrown into the sea by the monster waves, just as easily as a boy tossing pebbles,” the book says. “The pilings came apart and floated like matchsticks. Only 504 feet of the pier remained.”

Walker wrote, of March 1983: “Another sea storm, strongest since ’39, wreaked havoc and severed the pier anew. Half its 347 pilings were destroyed.  What was left standing, shakily, with no center section, was the 80-foot base and 430 feet at the ocean end. Analysis determined that its failure had come from being attached with only drift pins, enabling the midsection to collapse under pressure in a domino effect.”

Over my nearly 50 years with the Sun-Post, I occasionally interviewed longtime residents or city employees who tried to save the pier in 1939.

The storm surf that took down much of the pier on Sept. 24, 1939, wasn’t actually a hurricane striking San Clemente, although some people seem to have referred to it that way.

An account in San Juan Capistrano’s Coastline Dispatch described how monster 20-foot waves racked the pier, loosened the pilings and sent two sections of the pier into the sea.  The pier, built in 1928 by men and mule teams, was one of several Orange County piers assaulted by gale-force winds, huge waves and sweltering heat.

“Long before 5 o’clock Sunday afternoon, it became apparent that the pier was weakening and the Owl Boat Co. refused to allow fishermen to go out on the barge,” the Dispatch reported. “Other visitors to the pier were warned to seek safety. At 5:30, the center span dropped into the water, and at 6 o’clock, the ocean end dropped, floated for a few moments and then crumpled like so many matches.

“Mr. and Mrs. George Stearns, who for the past 11 years have operated the cafe and tackle store, stood on shore and watched their 11 years of labor drop out of sight.”

RIDE OF YOUR LIFE

The Owl Company’s barge was tossed about by storm water a mile offshore, with two employees stranded until rescue was possible Tuesday morning, “having an experience which they will never forget,” the newspaper said.

All bait boats were sent to the shelter of Newport Bay early that Sunday afternoon and got there just before a large yacht sank at the bay entrance.

“Cancellation of train service to San Clemente from Sunday noon to Tuesday evening was due to the water undermining the tracks near the Hamilton Cotton Ranch,” the article said. “Repair crews which had been working night and day restored through train service late Tuesday evening.”

Meanwhile, many trees across San Clemente were blown down by 55-mph winds.

“Damage to walnut and citrus groves in this area was heavy, and electric service was interrupted at brief intervals during Sunday afternoon,” the paper said. “The city has practically recovered (by Friday, Sept. 29) from the hottest heat wave, the heaviest rainfall in 24 hours and the most severe wind storm.”

Longtime city employees Dewey Hoople and Dave Johnson did all they could, venturing out onto the wallowing pier to try to secure loose pilings before they could strike sound pilings, but then being forced off the pier.