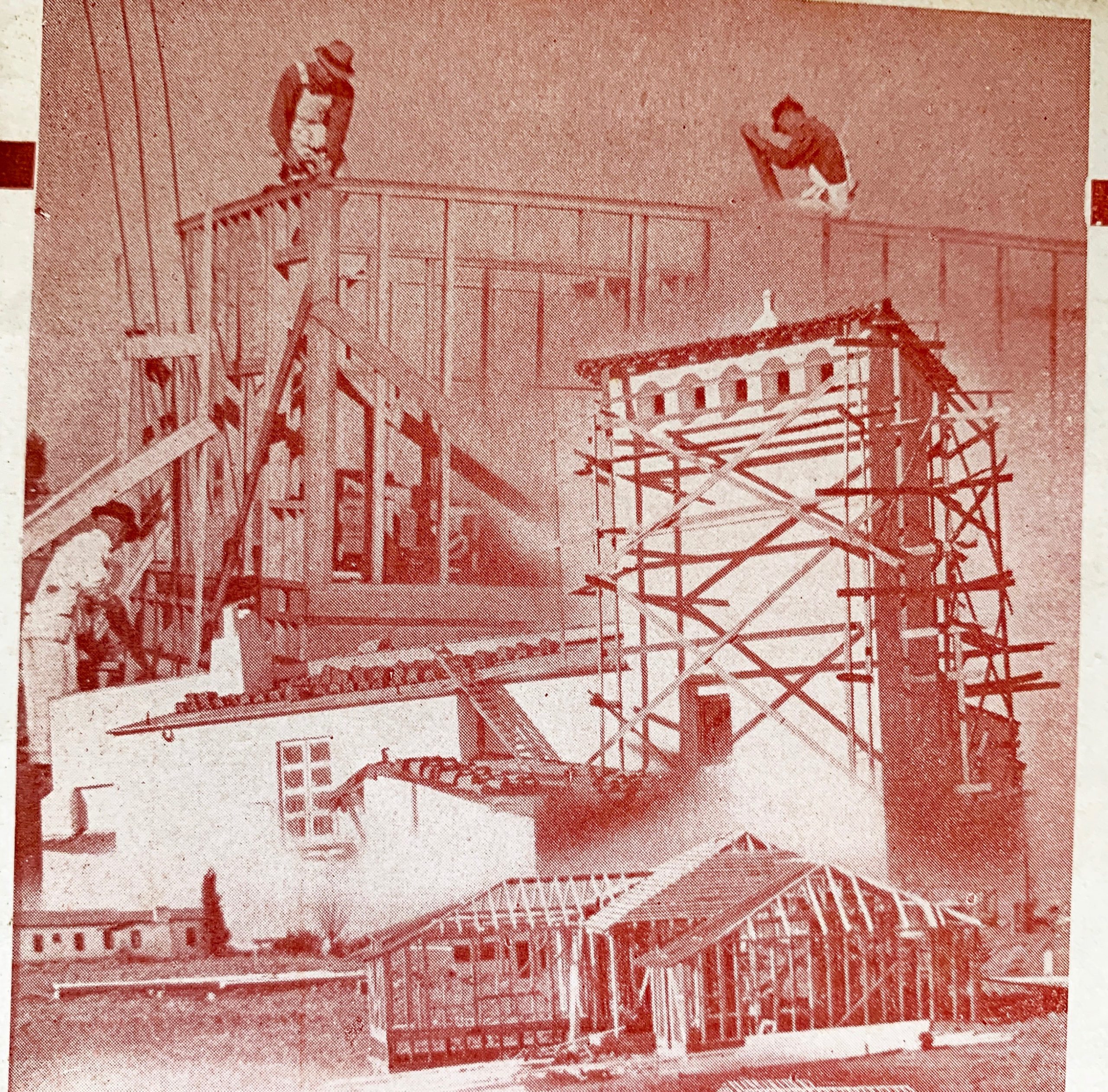 CoastLines: Movie Palace Was a Show of Faith in 1938 San Clemente

As we watch the historic San Clemente Theatre being restored—reborn as an events center and food court—we can be confident it’ll be an exemplary component of what’ll be known as the North Beach Historic District.

The theater’s heritage dates back to opening night, May 12, 1938. Here’s how it was introduced to the moviegoing public:

“Where the lustrous California Moon threw her limpid beams down on the solitude of the great Creator, there now stands man’s mighty contribution to beauty,” Pacific States Theatres, Inc., proclaimed in a glossy 24-page opening-night program.

“This gorgeous institution,” Pacific States wrote, “is and will ever be visible evidence of the operators of the San Clemente Theatre’s profound faith in this city.”

Maybe 40 years ago, someone walked into the Daily Sun-Post office and handed me a copy of the theatre’s opening-night program, for safekeeping. I’ve kept it all these years. I’ve never written about it, until now.

It tells why Bank of America’s subsidiary, the Capital Company, invested $150,000 to build an acclaimed dance pavilion known as Casino San Clemente in 1937, followed by an iconic movie theatre in 1938, next door.

Both institutions helped launch an advertising campaign designed to rescue San Clemente from the economic depths of The Great Depression.

New York’s stock market collapse of 1929 had shattered town founder Ole Hanson’s 1925 dream of building and sustaining a community unlike any other in America—a “Spanish Village by the Sea,” replete with unencumbered recreation amenities and infrastructures delivered by the developer.

San Clemente thrived spectacularly until after the stock market crash of Oct. 29, 1929. The city, unencumbered by debt, held on for a time. By 1934, local government was teetering. Many property owners lost their investment. Hanson lost his palatial home to the bank and left town.

The bank, now owning so much property, set out to sell property, build homes and businesses. The bank went to court to strike down Hanson’s mandate that all structures in his village must be Spanish architecture.

The Capital Company then built model homes as San Clemente’s first non-Spanish structures, no longer promoting “The Spanish Village.” This was now a “romantic sea coast city … convenient to inland cities and within easy driving range.”

“The road to fun and happiness leads to San Clemente,” the Capital Company announced.

My copy of the theatre’s grand-opening program had belonged to J.E. Poynter, manager of the new cinema. Evidently, a Poynter family member didn’t know what to do with it and placed it in my trust.

WHY AN ORNATE CINEMA?

So now the Capital Company relaxed Ole Hanson’s strict Spanish architectural requirements, while ironically choosing an elegant Spanish design for the cinema, ornate inside and out. The Casino had Spanish elements as well.

With a 44-foot-tall tower, the cinema became an unmistakable landmark at what was then San Clemente’s highway entrance from Los Angeles.

“To you who seek the most of life, who naturally yearn for fitting intellectual stimulation, will come an ever-increasing warmth of appreciation as you respond to the moments of joy, hours of delight, nights of glorious romance and adventure in these inspiring surroundings,” the program proclaimed. “Let the world move as it may … let crowns fall and governments totter … let the mountains rock and the very ocean overflow its restraining banks … the new San Clemente Theatre will remain an appealing shrine of comfort and luxury, a haven of relaxation.”

Ole Hanson, known for his flowery oratory, would’ve appreciated this hyperbole, finding the San Clemente Theatre to be a fitting shrine to his now compromised Spanish Village.

The Ole Hanson Organization had always envisioned recreation, culture and entertainment at what we now call North Beach. The anchor was the stylish public pool and beach club, built by Hanson in 1927 and donated to the townspeople. The 1937 dance casino was next, then the 1938 cinema.

“The building is a fitting tribute to the progress of San Clemente (and) faith of the Capital Company,” the Chamber of Commerce trumpeted in the opening-night program.

Architect Clifford Balch dedicated his landmark to “San Clemente, the city of old world atmosphere.” He wrote: “Here is recalled the spirit of California of nearly a hundred years ago … a scene of rare beauty unequaled in all California.”

An illustrated “Fun in San Clemente” page touted the town’s attractions—the public pool, beaches, fishing, horseback riding and golf. Another seaside amenity now was “the privilege of leasing a Sun-tan Cabaña site for an entire year … these comfortable, attractive play-houses bring new joy to days of luxurious laziness on the beach.”

“An exciting new city continues to build! We in San Clemente are endeavoring to reveal to the rest of the world the complete life available here,” Capital declared.

Advertisements in the opening-night program conveyed congratulations from businesses supportive of this addition to San Clemente. The Capital Company pledged there’d be more to come.