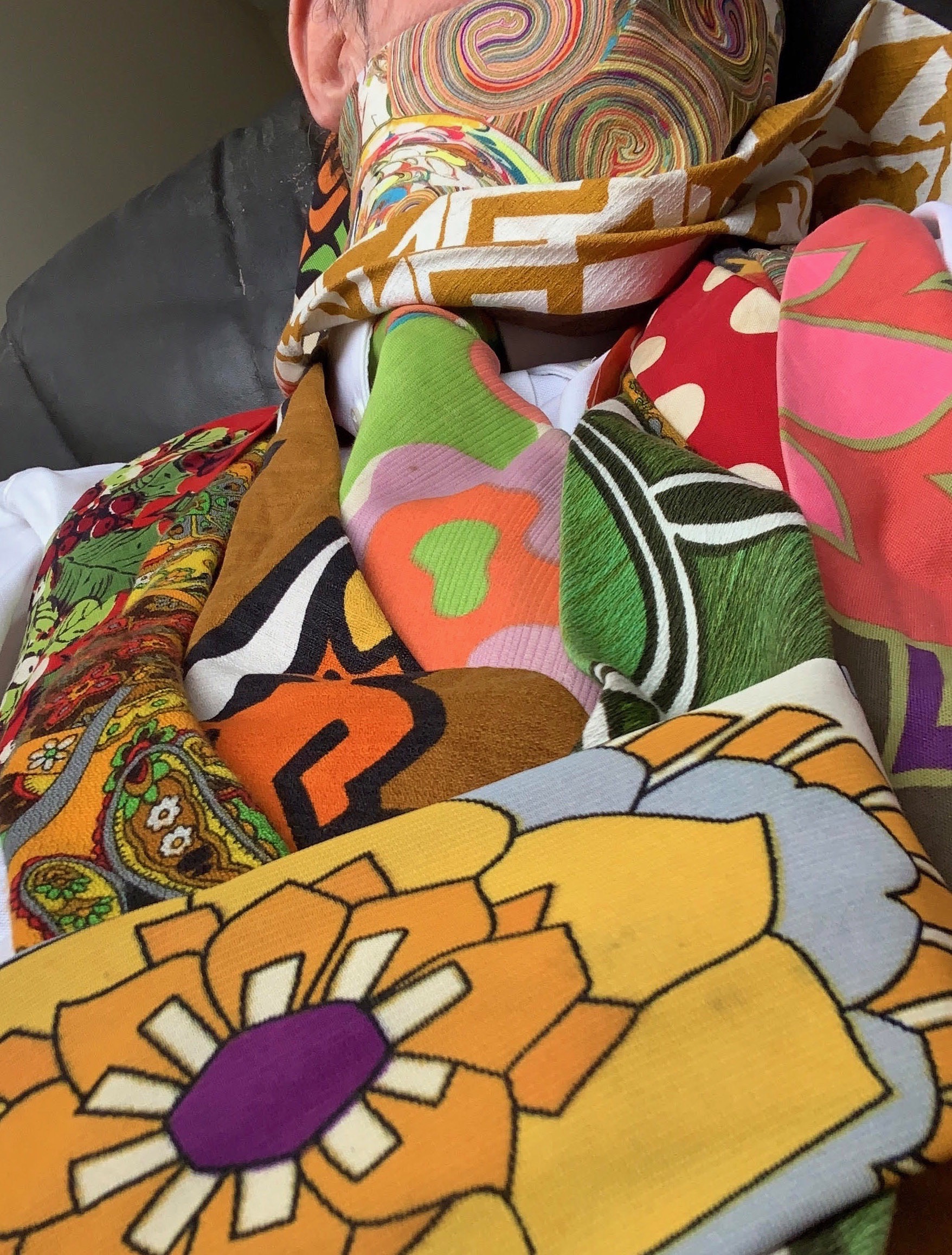 There was a time when I was notorious, all over town, for my business attire.

To this day, people walk up to me and say, “Where’s your tie?”

I had the funkiest collection, probably close to 100 old-school neckties—the tackiest ties I could find—back when America wasn’t wearing flashy ties.

I still have about three dozen of them, dangling in the closet, unworn for probably 15 or 20 years.

Could there ever be a revival for my long-neglected tie collection in today’s pop culture?

More on that, later.

One Friday, Stanford Manning, publisher of the San Clemente Daily Sun-Post, gathered together our motley crew of male reporters. He informed us that starting that Monday, we would look more professional. We had to wear a tie.

Growing up in San Clemente, a laidback surfer, I never learned to tie a necktie. On rare occasions when I absolutely had to wear one, it would be a clip-on tie, about as boring as my high school chemistry teacher (just kidding . . . love ’ya, Captain Linke!).

I had two days to prepare for Tie Day. I needed to come up with a truly memorable tie, make a statement to my boss.

I scoured the stuffy old tie racks along Thrift Shop Row. Eventually, I gasped, “This is the one!”

It must’ve belonged to a professional clown who donated it to the thrift shop upon retirement or death. It was glowing green, with globs of orange, blue, lavender and peach.

Come Monday, it was a riotous hit with my co-workers. Not so much with my boss, who did muster a smile, uttering something unprintable.

I decided to take my clown tie to the next city council meeting. Sitting in the front row, I wore a deadly serious look to show my earnest respect for the august body.

To my surprise, my act of defiance proved the next few days to be a hit. Produced smiles, grins, looks of disbelief during my workday.

On weekends, I began looking up addresses for thrift shops all over Orange County. I was picky. Each new tie should gross out more than the one before it.

A WORD TO READERS

In a 1981 column, titled “Fit to be Tied,” I explained myself to readers—if you have to gag your esophagus in a worthless piece of cloth for eight hours, you might as well select one that people will notice.

“About the most useless thing in the world, next to your belly button, is a necktie,” I wrote. “I should know. I wear neckties next to my belly button every workday of the year.”

By the time that column appeared, I had dozens of neckties that stuck out like a sore thumb in San Clemente. No one in an office setting wore ties anything remotely like mine. They wore ugly ones.

Most of my ties, I imagine, were discarded gifts—Father’s Day gifts or a gag gift that made the recipient truly gag.

To me, absurd ties weren’t much of a leap from high school days. Some of us surfers were known to wear the wildest oversized Hawaiian shirts we could find. Some of my ties would have made great Hawaiian shirts.

“It’s not that I enjoy strangling myself daily in a piece of cloth that serves no other purpose than to fulfill a social custom,” I wrote. “A tie doesn’t even keep those two little round things on your chest warm on a cold day. It faces the wrong direction.”

If a tie is supposed to dress you up, why, my column asked, wear a boring one?

I tried to imagine a dour, dignified soul, marching into our newspaper office wearing a dignified striped tie, dignified shades of brown.

The visitor, not knowing me, asks for me at the front desk, then approaches my desk with his equally dour wife to engage this reporter in discussion, probably something direly political.

“An uneasy look betrays them,” I wrote. “Their eyes dart down at the gangling purple and yellow tie—then dart up again, trying not to get caught. But I’ve caught them cold.”

“I can appreciate now the meaning of that sly smile Dolly Parton gets when she’s just caught someone sneaking a peek at her cleavage,” I wrote.

Sadly, it was only a matter of time until my neckties—those ghastly, unloved ones that, before me, used to wither and die on the thrift shop rack—became fashionable.

“Someone will probably turn my ties into a fad,” my 1981 column said. “California is a heckuva place to start fads. With all the pop T-shirts, Hawaiian-style O.P. shirts and other colorful surfwear on the market, someone (even I) could make a fortune popularizing my kind of tie collection.”

There was just one problem, I wrote: “Once outrageous ties caught on, they wouldn’t be outrageous anymore. The game would be over. I’d have to look for something else.”

Eventually, the fashion world caught up. Flashy ties became the rage. I even bought a few nouveau outlandish ties, even the immortal fish tie.

But these ties weren’t the same. They couldn’t compare to my genuine, old-school, in-your-face ties.

Maybe there is hope, in COVID 2020, to resurrect what’s left of my obsolete neckties.

Someone handy with a sewing machine surely could modify them into retro, funky face masks.

I would wear one.

Then again, maybe I wouldn’t.

Wearing one of my reincarnated ties as a face mask would cost me my anonymity in the grocery store.

“I remember THAT one, Swegles!” someone on Aisle 9 would bark at me, for all to hear. “That’s got to be YOU!”