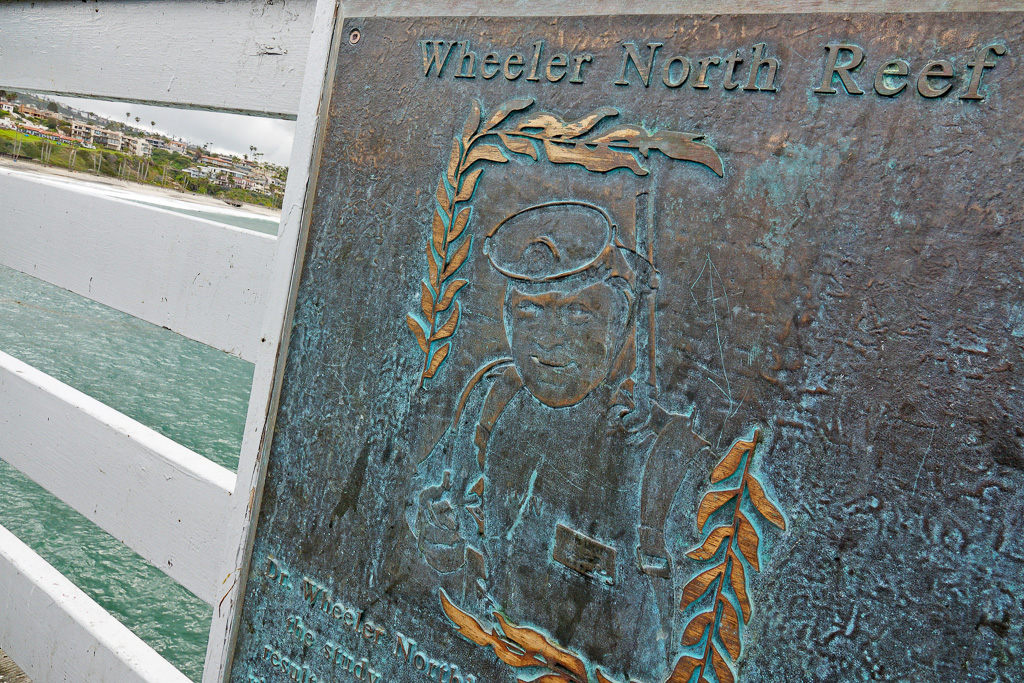 Southern California Edison is about to more than double the size of Wheeler North Reef, a 174-acre, man-made kelp forest that stretches from out past the end of the San Clemente Pier south to Seal Rock.

What if it isn’t necessary?

The California Coastal Commission issued a coastal development permit on March 7 to add a 210-acre reef north of the Pier. Barges will dump some 175,000 tons of quarried rock onto the seafloor at depths of 38 to 49 feet, between the Pier and Poche Beach.

But what if that premise was flawed?

The suggestion comes from no less a source than Wheeler North, the reef’s esteemed namesake, a man who was considered to be the pioneer of kelp reef studies.

North, a Caltech professor of environmental science, made the assertion repeatedly in an interview he recorded for Caltech archives four years before his 2002 death.

From the 1960s into the 1990s, when leukemia began taking its toll, North performed periodic underwater surveys of a kelp reef off San Onofre for Edison. The utility company commissioned his expertise while introducing a nuclear reactor at San Onofre in 1968 and adding two larger reactors in 1983 and 1984.

In his 1998 interview, North took issue with conclusions reached by Coastal Commission reef studies that led the agency to require Edison to build a reef off San Clemente.

“The first San Onofre reactor went into operation in 1983 in the middle of a horrendous El Niño,” North said in the interview. “The kelp beds all up and down the coast were suffering. And the El Niño didn’t abate here until December of ’84. So the kelp bed was in poor condition.”

North said a kelp reef being monitored four miles to the south went extinct during the El Niño, too far away to blame on the power plant. The study didn’t consider that, he said.

The study cited a monitored kelp reef located north at San Mateo Point. It suffered, too, North said, but recovered sooner than San Onofre, assisted by imported Mexican kelp plants that had been introduced there in an experiment, expecting them to be hardier than local kelp.

North said the Coastal Commission’s study concluded that San Onofre’s kelp reef would have been 60% bigger than it actually was, if SONGS Units 2 and 3 hadn’t been operating.

“They did a lot of excellent work,” he acknowledged in the 1998 interview, “but they came up with some rotten conclusions. I was just furious. I said, ‘That is totally wrong!’ It’s just that San Onofre took a little longer to recover from the El Niño than San Mateo Point did. It’s now OK. You can’t grow any more kelp there; all the rocks are taken up with kelp plants.”

Nielsen was in a position to know. “I took Wheeler out many times on my boat to do surveys and look at the kelp reefs,” he said.

In the 1998 interview, North recalled telling a regulatory meeting, “This is crazy. The San Onofre bed is back to normal. You can’t get any more kelp growing there. This conclusion is just wrong.”

The Coastal Commission stated that the power plant not only degraded the kelp reef but killed fish sucked into the cooling-water intake system. To that end, Edison was required not only to build a kelp reef off San Clemente but to restore at least 150 acres of wetlands in San Diego County and install fish barriers to reduce the number of fish killed inside the cooling system.

North did not live to see Edison spend some $20 million to construct and complete the 174-acre San Clemente reef in two increments—1999 and 2008—nor to see the California State Lands Commission install a Wheeler North plaque at the end of the San Clemente Pier, celebrating “his” reef.

“Dr. Wheeler North’s lifetime dedication to the study of kelp ecology ultimately resulted in protecting and restoring this vital marine resource for use of all generations,” the plaque says.

Yearly Coastal Commission monitoring studies will continue for at least 30 years—for as long as it takes Edison to receive 30 years’ credit for producing and sustaining a population of 28 tons of fish, calculated yearly—to make up for 30 years that Edison operated the plant’s saltwater intake and outflow cooling system. The plant retired in 2013.

Nielsen provided the San Clemente Times with a link to the Caltech interview. He said he plans to discuss it during a Coastal Commission reef workshop at 1:30 p.m. Monday, April 29, at the Ocean Institute in Dana Point. The public is invited. The workshop will include an update with the coming $20 million reef construction, expected to begin in May.

The commission conducts yearly workshops to report on how well the 174-acre reef is doing, trying to meet the Coastal Commission’s requirements.

Since 2009, the reef has produced plenty of kelp, but it never, for even one year, has met the fish standard.

Doubling of the reef is the approved strategy, hoping a longer reef will attract and sustain the required fish population.

Monday’s workshop will include an update on the coming reef construction.

Fred Swegles is a longtime San Clemente resident with more than 48 years of experience covering the city.