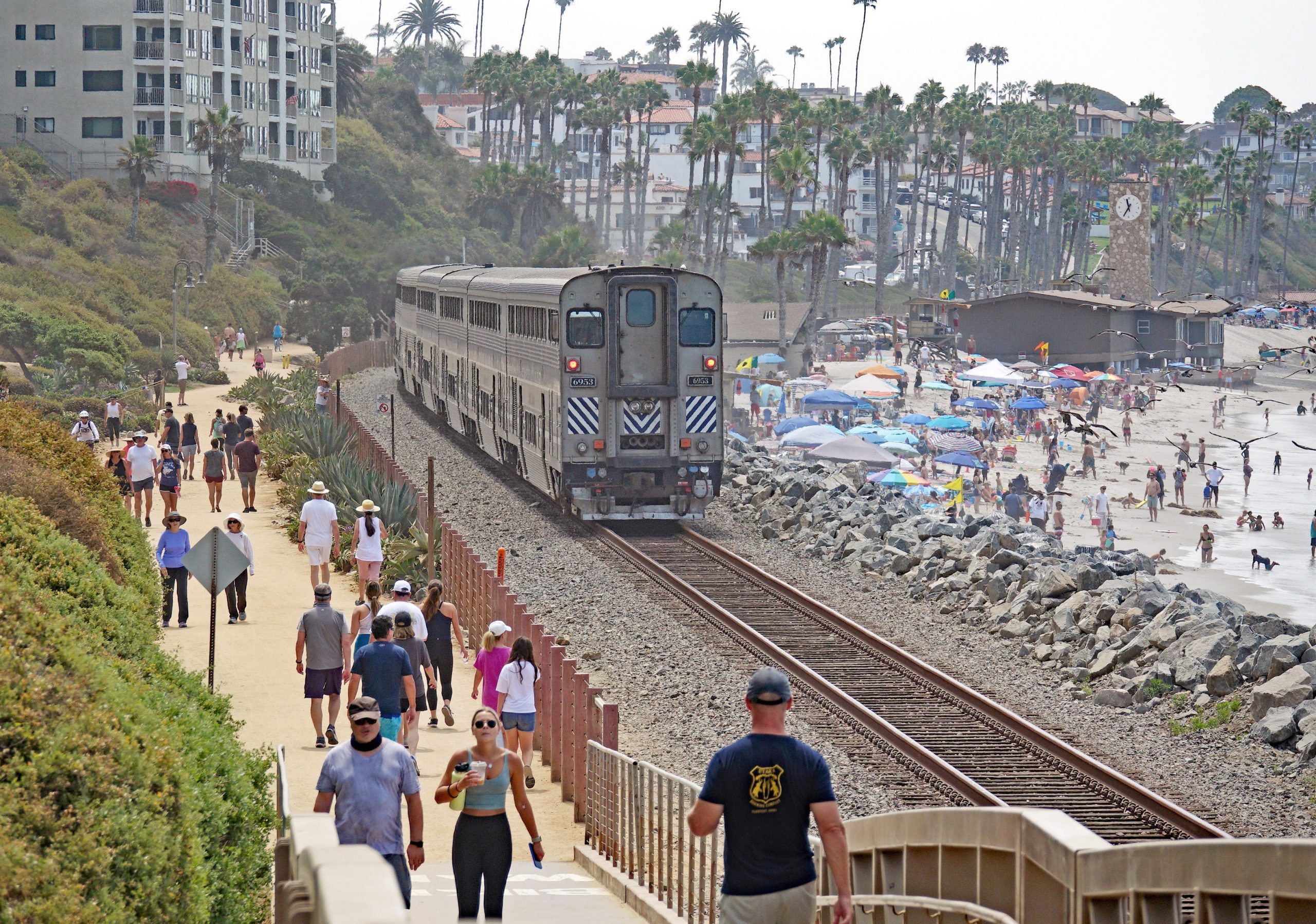 CoastLines: No High-Speed Train Through San Clemente; What Became of It?

On Oct. 7, I wrote about a hotly debated 2002 proposal by the state to double-track San Clemente’s beach, making room for a high-speed rail line running along the coast.

After adamant objections from the cities of San Juan Capistrano, Dana Point and San Clemente, the route was canceled.

The California High-Speed Rail Authority recently replied to my column, which had looked back at 50 years of railroad issues in town.

Rachel Kesting, information officer, told me that she enjoyed the column and wanted to share that California’s statewide high-speed rail plan is still very much alive.

First, just try to picture if the state had put parallel tracks along our beach. Or, as an alternative, turning the high-speed rail tracks inland at North Beach, carving the route inland to Interstate 5, burrowing it underground and running it beneath the freeway to San Onofre.

Either way would have been part of a $25 billion, 700-mile statewide bullet train plan.

In 2004, the state envisioned a downsized $9.95 billion bond election for a high-speed rail line linking San Francisco with Los Angeles, not farther south.

In 2008, California voters passed a $9.95 billion bond election to build a high-speed route from San Francisco to Los Angeles to Anaheim.

There was no chance it’d come to San Clemente. And today, the entirety of the project is stalled— woefully underfunded while building a first segment in California’s Central Valley, I wrote. Merced to Bakersfield is currently the only stretch of the line funded, under construction.

“The Authority is focused at this time in completing the Merced to Bakersfield project section with the funds that are available and will become available in the future,” Kesting wrote. (Details available at hsr.ca.gov.)

The state today has a conceptual route to take a high-speed train through Murrieta, going south to San Diego. It’d be about 25 miles inland of San Clemente, if ever built. Also contemplated is a possibility of a northern branch to Sacramento.

A foremost goal is bullet-train travel from San Francisco to Los Angeles in under three hours.

CAN THEY BUILD IT?

Some have suggested California needs to downgrade the underfunded train from electrified high-speed—which voters have expected since 2008—to conventional speeds. Or scrap
the train entirely.

Funding is so short that some have suggested California downgrade it from high-speed electrified to conventional speeds. Or scrap the project entirely.

There are newspaper editorials calling the project a waste of time and money and to just scrap it without spending a penny more from the rest of the bond. That would leave elevated Central California route structures, standing empty.

Makes you wonder if the federal government might step up and help California get a legitimate electrified high-speed system from the Bay Area to Anaheim or on to San Diego—and one that could include Sacramento.

The federal Amtrak train system has had a high-speed Acela electrified 150 miles-per-hour service since 2000, from Washington, D.C., to Boston. It’s highly popular along the nation’s busiest rail corridor.

The non-Acela trains can reach as much as 125 mph. Acela trains not only go faster but have far fewer station stops, reducing travel time.

California’s high-speed agency figures it could get more people out of their cars to travel cleaner and faster—speed of travel, also electrification replacing oil consumption.

WOULD IT WORK IN CALIFORNIA?

How many people would take the train? If it’s popular like in the northeast corridor, a fair number of people would likely embrace traveling less than three hours from San Francisco to L.A., more comfortable than on a crowded airplane or driving a car.

If you fly from LAX to the Bay Area, you have to drive to the airport well in advance of your flight, or ride in a taxi or shuttle through the choked-up airport loop, then go through TSA lines and line up again to board your plane, taking time to be seated along with everyone else, then taxi to take off, fly, land an hour later, deplane in slow lines and then take transportation from the airport to wherever.

Access to train stations is easier, and on and off much more quickly.

A recent Associated Press news story said, “The ambitious project has been closely watched nationwide as a test of whether the United States can move away from its car culture and catch up with other nations on high-speed rail. Supporters say the completed project would radically change how people travel, while cutting down on carbon emissions. Detractors say it’s a taxpayer-funded boondoggle.”

How much does Merced to Bakersfield cost?

The Authority’s 2020 Business Plan estimates that it will cost between $21.3 billion and $22.7 billion. That price tag includes all the land, structures, tracks, signaling, electrification systems, stations, trains and their testing, our investments in preparatory bookend projects in northern and southern California, and complete environmental clearance of the entire 500-mile system between the San Francisco Bay Area and the Los Angeles Basin and Anaheim, via the Central Valley.

Do you have enough funding to get trains running that section?

Yes, for Merced to Bakersfield, according to the 2020 Business Plan, the Authority estimates we have all the identified, available, and authorized funds needed to complete this segment. For the entire system between the San Francisco Bay Area and the Los Angeles Basin and Anaheim, via the Central Valley, the Authority has secured approximately one-third of the funds needed to complete the current estimated cost.

How much remains from the 2008 bond, and how much farther could that get the project?

The Authority has $4.2 billion available in remaining Proposition 1A bond funds for continued advancement of project activities. Of this $4.2 billion, the Authority proposes to direct $100 million to ongoing project development work on Phase 1 sections, including early design and completion of environmental documents.

What is the grand total if the entire system is built?

The current cost estimate to deliver the 500-mile system linking San Francisco to Los Angeles/Anaheim via the Central Valley ranges from $69.01 billion to $99.9 billion, with an expected base cost in between, of about $83 billion, (covering) inflation on costs over a projected project delivery schedule. There are no cost estimates for Phase 2, which extends the 500-mile system north to Sacramento and south to San Diego.

Is President Biden’s infrastructure bill proposing they get the job done (or partway done) for California?

The Authority sees some $20 billion to $30 billion in funding for which we would be eligible to compete. And any funding we are able to secure would help us expand past the Merced to Bakersfield segments.

The concept of the federal government helping bring an Acela to California?

The Northeast Corridor where Acela runs is unique in Amtrak’s service, as they own the right of way. Most other Amtrak routes, they do not, complicating and increasing the cost of any attempt to make an Acela-like service elsewhere. Additionally, Acela doesn’t reach the speeds voters mandated in 2008.