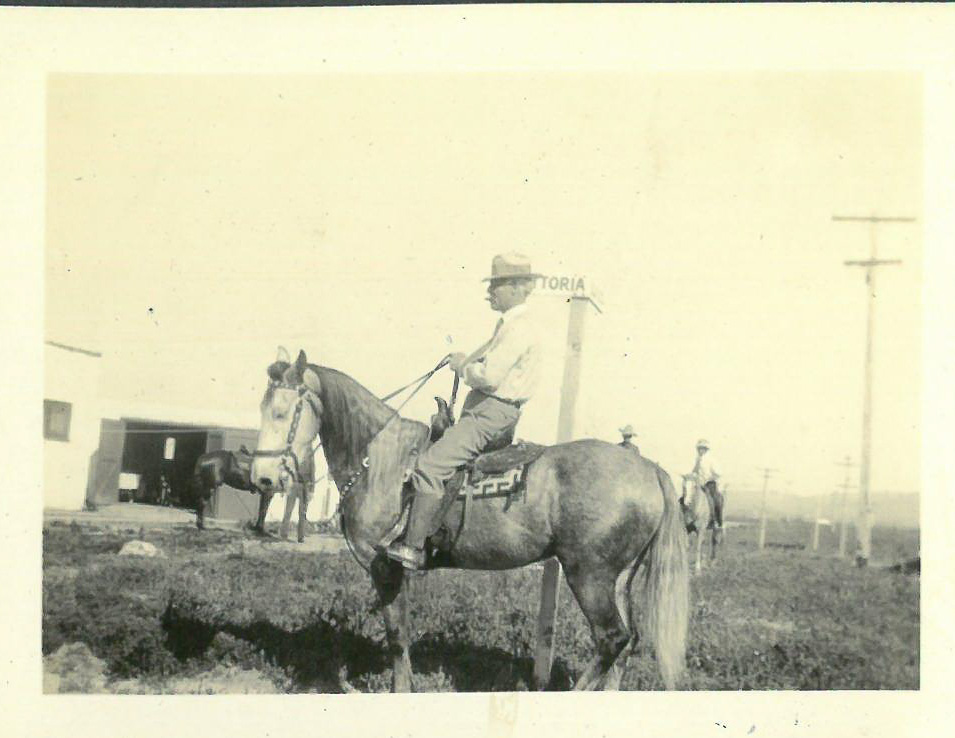 CoastLines: Not Lost to the Ages, Photographs Show Historical Features of San Clemente

I could barely believe the contents of a fragile photo album I found on my doorstep.

My jaw dropped when I came to a page where someone had scrawled, “Grandpa Hanson, 1925.”

A man on horseback, wearing a hat, a white shirt and a tie sure looked to me like Ole Hanson, founder of San Clemente.

Another photo was labeled “San Clemente, 1927.” Ladies were socializing in a trellis-covered patio. Other pictures showed children and adults on horseback. One, I could tell, was Ole, two years after the birth of San Clemente.

Another page was labeled “San Clemente, Sept. 1928.” People were posing on a beach with only a sprinkling of houses in the background.

And there was the San Clemente Pier. Ole had just built it, a gift to his village.

It soon became clear who had sent the albums—Julia Hanson Watters, granddaughter of Ole Hanson.

She figured I could find a home for the albums. And I did, handing them off to the San Clemente Historical Society.

How did these treasures fall into my lap? Maybe some readers will remember a column I wrote in 1995, headlined “A small world.”

In April, 1995, I was on a Florida beach, photographing a surf contest with my big 600-millimeter lens. A mom approached, asking me to take some shots of her son. She pointed him out. Phillip Watters was one of America’s most talented up-and-coming surfers. Photos I took of Phillip would appear in surf magazines.

“Where are you from?” Julia asked.

“California,” I replied. “Where in California?” she inquired.

“Oh, I know San Clemente!” Julia said. “My father grew up there. His father was the founder of the town.”

I almost fell over. Julia and I proceeded to swap stories about Ole Hanson. I described how his town had evolved after his death in 1940.

Julia invited me to her home to continue our recollections. Upon returning to San Clemente, I published “Small World” in the Sun Post News and waited for June, when Julia would bring Phillip to San Clemente for his first appearance in the NSSA Nationals surf contest at Trestles.

I couldn’t wait to show Julia her grandfather’s town. Then, at her hotel, I was in for a second surprise.

She introduced me to her father, Lloyd Hanson. The North Carolina resident had flown out to watch Phillip’s surf contest.

Lloyd was a storyteller without parallel, I quickly learned. A real character. Blessed with a photographic memory.

Lloyd was 8 years old when Ole started San Clemente in 1925. From 1928 to 1934, Lloyd lived in the family’s elegant mansion on a bluff overlooking Ole’s pier.

The palatial home, now known as Casa Romantica, was owned by the city in 1995. Eventually, it would become a cultural center. In 1995 it was a privately operated events center.

I arranged to unlock the door so Lloyd, Julia, Phillip, and Phillip’s sister Davy and I could explore Lloyd’s old haunt.

Lloyd was like a kid in a candy store. Gleefully, he described his penchant for mischief as one of 13 children of Ole and Nellie Hanson.

There was also a pet monkey, six peacocks and other birds. The monkey, Patsy, would sit on Lloyd’s mother’s shoulder in the Rolls-Royce as the chauffeur drove.

“It would bite my father,” Lloyd told me.

He described the day he and his brother set off a cherry bomb in a toilet.
“My dad was in the room, kicking us,” Lloyd said. “That was one of the times I got ordered out of his city.”

Lloyd was exiled to the Hansons’ other home in Los Angeles, eventually forgiven and permitted to return to the beach.

I wrote about this. Several years later, Lloyd called me to ask if I had any photos of myself on the beach beside my 600-millimeter lens. I didn’t. At his request, I had someone shoot one.

I sent it to Lloyd. You can imagine my shock when he visited San Clemente to release “Inside the Casa,” a photo book he had compiled of early San Clemente memoirs.

The introduction to the book displayed the “Small World” column and my picture. Lloyd had dedicated the book to me.

Invited to Phillip’s 2006 wedding in Florida, I lurked around as an unofficial photographer, prowling for spontaneous shots. I sent the family a collection of photos, mostly of people I didn’t know.

Then in 2010, I attended Casa Romantica Cultural Center and Gardens’ gala opening of a gallery room dedicated to Ole Hanson and San Clemente’s early years.

By coincidence, a man from North Carolina had been motoring down the California coast on vacation and just arrived in San Clemente. He stopped into the Casa, not realizing something special was going on.

For me, it was a small world all over again.

The Casa made him a guest of honor for a ribbon-cutting. When he was introduced to me, it turned out he already knew me. He remembered me from Phillip’s wedding. I had taken his picture.

Tom is Julia’s older brother. He had lived in San Clemente until he was 6. This was his first time back since moving away.

After the Casa event, Tom and I drove around trying to find his old house. We couldn’t. We think we came close. I pointed out the Bierbowers’ former home.

“One more thing,” Julia wrote in response to my most recent mail. “Tommy has Ole’s original desk, it is in pieces and would need to be restored. If there is someone there that is a woodworker and would like to restore it he is happy to donate it.”
Fred Swegles is a longtime San Clemente resident with more than 46 years of journalism experience in the city.