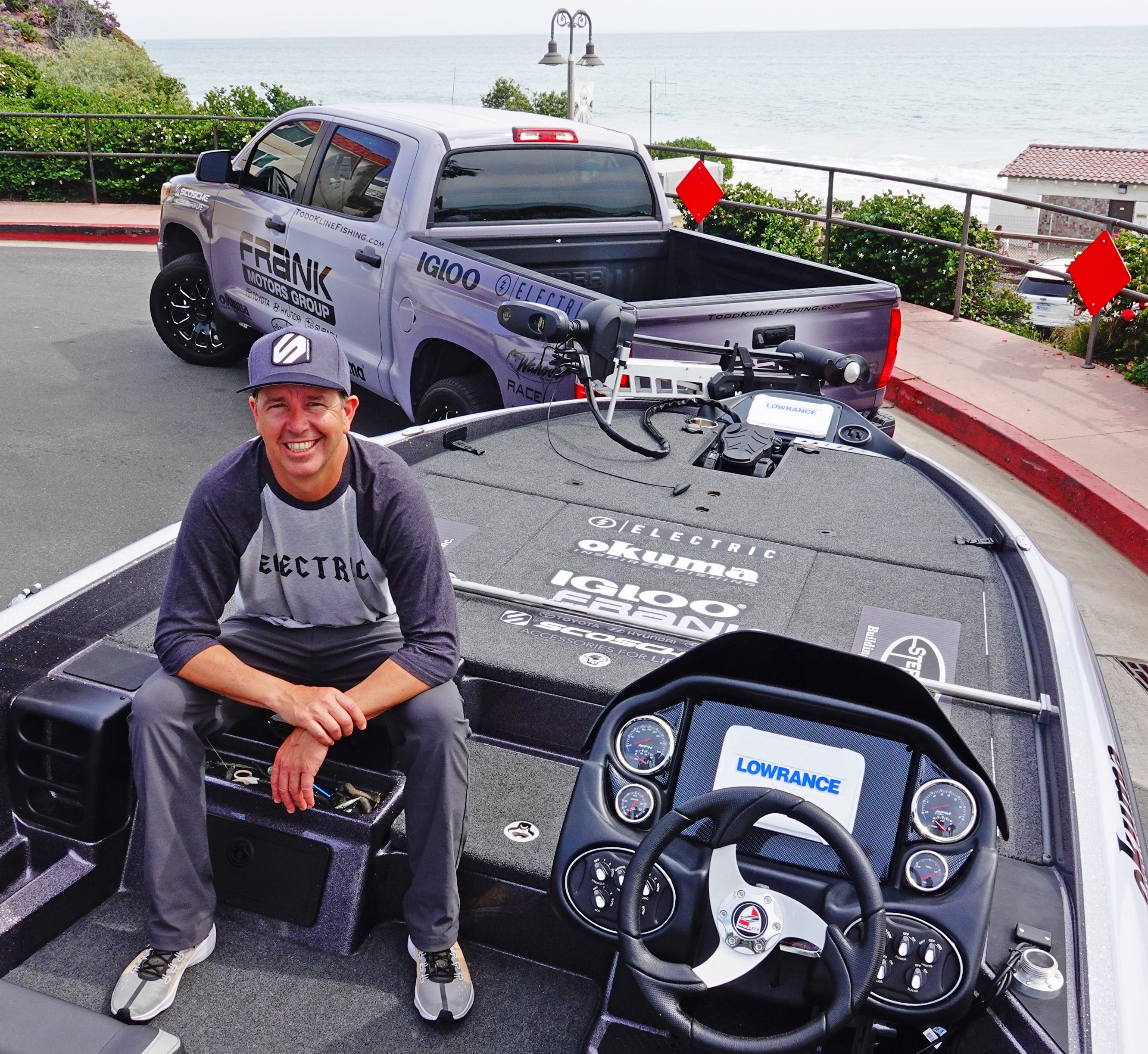 Few people get a second chance to live out childhood dreams. Todd Kline, a multi-faceted San Clemente resident, is enjoying the best of two worlds.

As a native of South Florida, he grew up competing in surf contests. He was a teenage contemporary of Florida wunderkind Kelly Slater, who went on to become the most successful pro surfer ever.

After a seven-year pro surfing career and a 17-year marketing career with Quiksilver, Kline today is a surf webcast commentator, a professional fisherman and a fishing tour guide.

His year is split among bass tournaments, serving as a World Surf League webcast commentator and running his own fishing tour business.

Kline appears regularly in that magazine. An “Adventures of Todd Kline” feature follows his life as a traveling surf commentator, as a pro bass fisherman in which he spreads the love for fishing by hosting tours, teaching the craft.

“We’re not ashamed to admit it,” California Sportsman Magazine says, “Todd Kline has the kind of life we wish we could experience.”

During Kline’s grommet surfing days, he and Slater grew up as friends. Both surfed for Quiksilver. Kline dominated South Florida, placed second at the U.S. Championships one year and competed professionally around the world from age 18 to 25 with moderate success. Slater, meanwhile, dominated Central Florida’s youth contests, won everything in sight in national and international amateur competitions and went on to capture 11 world professional titles, a feat unlikely to ever be matched or even approached.

When Kline moved to California to pursue his pro surfing dream, he was surprised to find that West Coast surfers, unlike his Florida contemporaries, were not fishing fanatics.

In 2013, at age 42, Kline reinvented himself, trying his hand as a pro fisherman. Where his surfboard used to be plastered with surf sponsors’ stickers, he now wears jerseys plastered with fishing sponsors’ logos.

He travels the country visiting lakes. He tries, in tournaments, to catch five bass that will weigh more than anyone else’s. Over time, that’s a lot of bass, and, no, Kline doesn’t live on a diet of bass. The fish are kept alive all day and, after a weigh-in, are returned to the lake to conserve the fishery.

Kline has achieved honors at the national level, has won four regional tournaments, has nine top-10 finishes and has twice been a western region angler of the year.

Despite doing this part-time, he is earning more from fishing than he ever did from pro surf competitions. Since 2013, competing in 25 tournaments, he has taken in $132,316, plus a $26,000 competition boat. In pro surfing, his biggest prize was a $10,000 check at the biggest of four World Qualifying Series tournaments he won.

Kline still can rip in the surf lineup. He paddles out whenever he can, although he’s pickier about warm water now. Sometimes Tiffani and Dylan join him.

A Few Words with Todd:

Q: Where will surfcasts take you this year?

A: I’ve been to Japan once already. I love Japan, love the culture, love the people. I’ll go back again in September for the ISA World Games. Then I do a lot of domestic events. The next ones are right in our backyard—the USA Surfing Championships.

Q: Where will fishing take you?

A: We have Arizona, and two in California. Then we have the U.S. Open, which takes place at Lake Mead.

Q: What took you to the Amazon?

A: To film a show for Stoked on Fishing, which airs on Fox Sports West. We were down there peacock bass fishing, one year ago.

Q: How do your surf buddies like you being a fishing pro?

A: Most guys are pretty excited about it. Most guys on the East Coast fish; always have. I’ve just been fortunate enough to have the passion and drive to actually make a living out of it.

Q: Which career brings more of a rush?

Q: How did you pick San Clemente to live, 20 years ago?

A: My wife was working in San Diego, teaching. I was working in Huntington Beach, for Quiksilver. There were plenty of places in between, but we fell in love with San Clemente. It didn’t hurt that there were good waves.

On Life and Love After 50: Woman Worries That Her Boyfriend Might Leave Her

Adoptable Pet of the Week: Peppermint