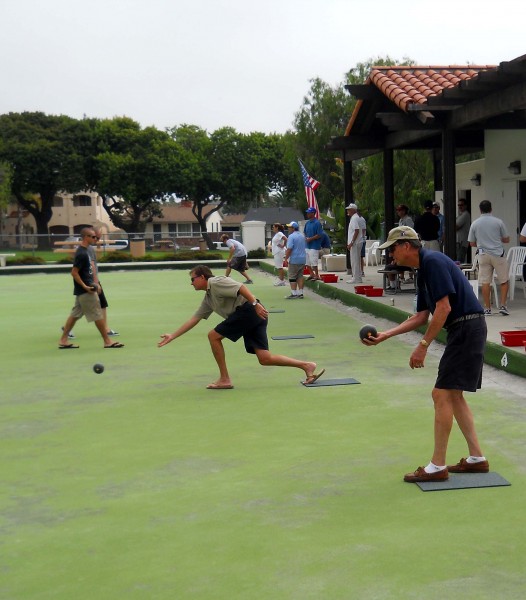 CoastLines: A Sad Day for One Sport Marks an Opportunity for Others

After a 65-year run, San Clemente’s lawn bowling community is calling it a day.

It’s sad for the lawn bowlers, who primarily are senior citizens for whom the sport represents a gentle, social outdoor activity. The problem, in recent decades, is that there have been too few lawn bowlers for the city to justify the expense.

As best I could learn, the original San Luis Rey Park bowling green was built in the 1960s. A lawn bowling association had formed in 1954.

I recall writing articles when the bowlers lobbied for a simple resurfacing in 1987. There were probably 30 to 35 lawn bowlers then. A fix-up would have been a nice gesture to the city’s senior population. But a closer look revealed drainage problems, and the city determined a fix wouldn’t be simple.

In 1990, the city proposed building a new green as part of a proposed Rancho San Clemente Park, but neighbors vetoed it.

In 1994-95, the city determined a resurfacing needed to be done properly. That upped the ante. There were debates at meetings. Critics said the money would be better spent elsewhere. Bowlers said if they had a proper lawn bowling green, usage would improve. They presented a marketing plan.

City councilmembers had doubts but approved a first-rate renovation. It cost $327,000, including a court expansion to tournament size, state-of-the-art materials, drainage, new walkways, landscaping, benches, drinking fountains, relocation of a playground and compliance with the Americans with Disabilities Act.

The new facility drew admiring comments from other cities’ lawn bowlers who paid visits. “We have six new members this past week,” the association’s president proclaimed, “and two or three came back who had quit.”

But the sport never truly took off. Sadly, because bowlers tended to be of retirement age, additions of new members to the core group were prone to be offset by members who either passed away or became unable to continue bowling.

As the 1995 bowling green aged, the bowlers again asked the city for help. But it was a hard sell. The green got so bad, it wasn’t inviting to play. The group had recently dwindled to about 10 members. “We have about four to six that play,” association president Howard Sharp said via e-mail.

The sad news for the bowlers represents an opportunity for partisans of other sports. The city is preparing to study possible new uses for the site—and not just for San Luis Rey Park’s bowling green, but for open spaces at Steed Park, San Gorgonio Park, Bonito Canyon Park and Linda Lane Park.

Be forewarned that the city faces budgetary constraints. Still, opportunities are there. “We will do a site-specific study,” Wylie said.

Nothing is set yet. Watch for Beaches, Parks and Recreation Commission meeting agendas. When park site studies launch, look for the city to invite public participation.

Letter to the Editor: Unsafe at Any Speed

Letter to the Editor: Council Qualifications