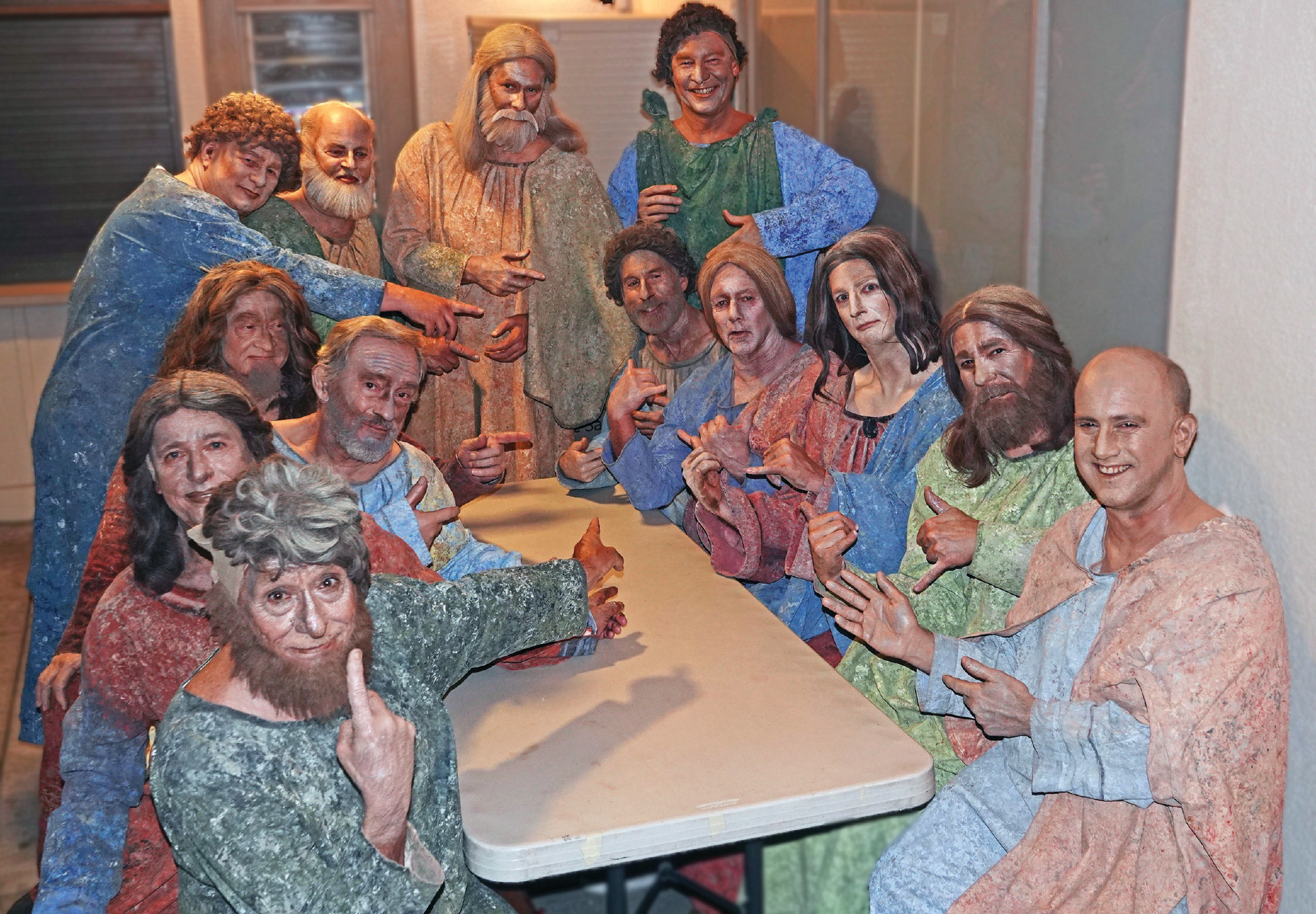 What if Leonardo da Vinci had painted Jesus and his disciples seated at a picnic table in one of art’s most revered works, “The Last Supper?”

To visualize this, try stepping backstage at the Laguna Beach Pageant of the Masters.

I recently got to witness what I’ll call “The Last Supper, Reimagined” when I went backstage to interview some of the 19 San Clemente residents who appear in this year’s pageant.

The theme for 2019 is “The Time Machine,” based on H.G. Wells’ classic 1895 science-fiction novel. The show’s script is lots of fun—an audio/visual experience that takes you on a musical adventure, including comedy snippets that reminded me of Back to the Future.

Backstage, I asked him if I could photograph him in full regalia and makeup. He said, “Yes . . . you want the whole group?”

To my amazement, we seated the entirety of “Last Supper” at a picnic table, all 13 looking earnest, as they do in da Vinci’s 521-year-old masterpiece. I asked, “But how will newspaper readers know which of you is our San Clemente guy?”

Backstage, every night, a visually stunning menagerie of pageant characters in varying stages of costume and makeup sit around playing cards or other games, socializing, waiting to be called into makeup or to take places onstage.

“It’s a total social scene among the kids,” said San Clemente resident John Pert, whose offspring, Zane, 15, and Myla, 11, are cast members. Pageant spectators would never guess so many of the role players are under 18, he said.

Cast members—all volunteers—are selected largely by height, how they fit into a particular painting. “Small” tends to fit nicely.

Shorecliffs Middle School student Myla Pert becomes an adult-sized teenager in a striped shirt, holding a faux Coca-Cola atop a vintage automobile in Stevan Dohanos’ 1950 painting “Working on the Jalopy.” The scene that Myla brings to life was a magazine cover for The Saturday Evening Post.

Zane Pert, a San Clemente High student, is an adult wearing a green suit in a 1950s outer-space movie poster, “The Day the Earth Stood Still.”

“Seeing all the pieces come together is amazing,” said Shawn Dashkowitz, 17. He’s a college student in “Picking Poindexter.” A year ago, he was in a statue, “Flag Raising over Iwo Jima.”  Another year, he was a slave in “Lewis & Clark at Three Forks.”

David Greuel, 13, is in his fifth pageant, and this isn’t his first as a bearded adult. His beard is black. Three years ago, he was a gray-bearded little old man in “Wright Brothers Flight,” standing poised next to America’s most historic airplane.

He and another San Clemente boy, Jackson Brownell, shared that role on different nights in 2016. In bearded makeup, they looked identical.

The pageant fields two complete casts, appearing on alternating weeks. Casts can back up each other if someone gets sick. Jackson Brownell, having been one cast’s gray-bearded man in “Wright Brothers,” has performed such other roles as a statue and a mosaic blending into a scene.

This year, Jackson (whose father is in “Last Supper”) appears in “Evening Picnic.”

In the show, six people who step into “Evening Picnic” must remain still for 90 seconds. Music plays, and the narrator spins a story before a rapt audience seated in the outdoor pageant bowl.

Viviana Moiso, 17, who does musical theater at San Clemente High, is in her sixth pageant, leaning against a tree in “Evening Picnic.” Her favorite role, two years ago, was as a French dancer in a pop art poster. “I was painted orange,” she said. “It looked like I had a fake spray tan.”

Gerald Freibrun, 16, is in his first pageant, as a gas station mechanic bending down, inflating a child’s beach toy. His brother Spencer, 10, was a peasant last year and is a puppeteer this year, holding up what the audience sees as a fish being chased by a dinosaur in a paleontology spoof.

Spencer Currie, 18, newly graduated from SCHS, has two roles—a tourist in a museum and a puppeteer brandishing one of 14 fleeing fish.

Samantha Bregman, a June graduate of SCHS, is a bronze sculpture in Salvador Dali’s “The Nobility of Time.”

“It’s fun having my whole body painted,” she said.

She admitted it’s not always easy keeping her composure. One night, “there was a bug crawling on me,” she said. “I wanted to like, hit it! Yeah, it was difficult!”

Brian Rios, an engineer by day, becomes ancient Egyptian royalty by night in his fifth pageant.

“The scariest part for me is the rehearsal days, when we do it in daylight and I see all those empty seats,” he said. “Twenty-six hundred empty seats are terrifying during the day. But at night, we don’t see the people in the audience. The music starts up and we totally get into character. It’s wonderful.”

“I once sneezed on stage. Once, a spider crawled on my dad while he was in a statue piece, like all the way up his back. He almost screamed. He held it. It’s only 90 seconds!” Viviana Moiso

“There was one piece several years ago where the other characters would stare at each other’s eyes and see who couldn’t blink for the longest time.” Brian Rios

“This year, a guy did this very hesitant sneeze, backstage, during the 90 seconds. It went super loud at the end. I tried so hard not to laugh . . . I didn’t! It was so funny.” David Greuel

WHY THEY DO IT

“The people are awesome. And the experience. It’s really cool to me that I can be a part of something that somebody made years ago, or centuries ago, and recreate it for other people to see.” Viviana Moiso

“Everybody here is really tight. It’s a family atmosphere. It’s like a summer camp. You see the same people every year.” Mark Brownell

“I love this community. I’ve been here since I was 8. It’s what I do pretty much every summer.” David Greuel

PAGEANT OF THE MASTERS

Letter to the Editor: It’s a Bad Law