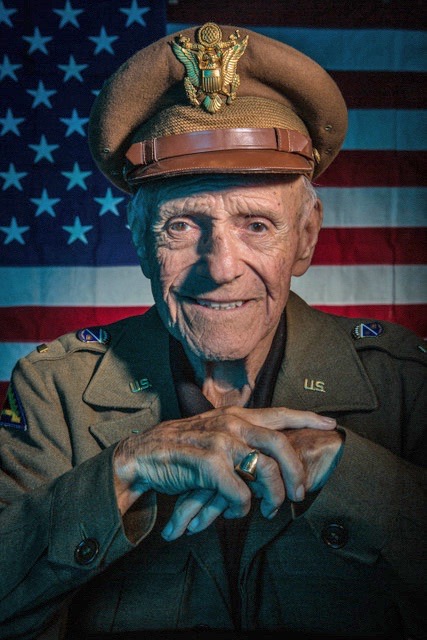 It would be difficult, over the past 25 years, to remember anyone in San Clemente more exuberant, more reverent about the American flag than George Key.

He gave talks at schools about the flag’s heritage. Helped organize San Clemente’s annual Memorial Day and Veterans Day observances, was a speaker, laid wreaths. Addressed civic organizations about the history of the “Star-Spangled Banner.”

He cofounded a program in which people who owned a frayed flag unfit for display could have it retired with dignity. Also, a program inviting spouses of deceased veterans to honor their loved one by flying the veteran’s casket flag over city hall.

You might think all of this flag fervor was in memory of Key’s historic ancestor Francis Scott Key, who wrote “The Star-Spangled Banner.” You would only be partly correct.

He never made a big deal about what he did in World War II. He was among thousands of U.S. troops who landed on the bloody beaches of Normandy in the June 6, 1944 D-Day invasion of France, setting out to rescue Europe from Nazi oppression.

In D-Day’s aftermath, Key risked his life well into the following winter, surviving the bloody, bitter-cold Battle of the Bulge.

“Dad was very closed-mouth about the war,” his daughter, Georgia Smith, confided. “The memories were just too painful for him to talk about. I never heard him talk publicly about his wartime experiences.”

When her father agreed to be interviewed for a 2019 coffee table book, WWII Heroes: 100 Portraits and Biographies of WWII Veterans, she learned stories she’d never heard.

Author Zach Coco described the D-Day landing: “George and thousands of other U.S. troops were dropped off in the water near the beaches of Normandy, and many friends were never seen again. He was weighted down with hand grenades, two bandoliers of ammo, and a gas mask, in addition to his combat pack and M-1 rifle, all of it dragging him down as the water rolled over his head with each wave.”

Key, part of the first wave of soldiers, “struggled to find a foothold against the German positions dug in heavily-fortified concrete bunkers above them,” the book says.

Serving with a regiment of combat engineers, he then helped U.S. forces push the Germans into retreat across France.

“It’s a hard thing to do to send a guy on a patrol when you don’t know if he’s going to come back or not.” Key was quoted as saying, “but you have to send somebody. It weighs on your conscience.”

The platoon helped clear away German occupation forces in Belgium and on toward the German border, using combat engineering to restore access over rivers when retreating Germans would destroy bridges.

“Many of the Germans just surrendered once they realized they were surrounded, and George’s unit was more than happy to capture them,” the book says. “‘We weren’t out to kill people,’ George remembers. ‘We were out to take prisoners, to end the war.’ ”

On Dec. 16, 1944, a fierce, last-ditch surprise German blitz known as the Battle of the Bulge would push back allied forces, lasting well into January. Key’s men held the line at a bridge crossing, the book says, linking up there with other U.S. units.

In all my years covering George Key’s patriotic endeavors in San Clemente, he never shared with me his personal war story. He was just “a WWII veteran.” It was always about the flag, freedom, the story of the “Star-Spangled Banner.”

After residing for decades in Glendale, Key chose San Clemente as his retirement home. He surfaced in the news in 1994, when he and other VFW members organized a local celebration, Loyalty Day, reviving a little-known observance that had dated back to the 1930s.

In 1996, Key was outspoken in protest, upon learning that a student government panel at Saddleback College had dropped the Pledge of Allegiance from its meeting agenda. A crescendo of protests reversed that decision.

In 1998, Key organized local fundraising to help the Smithsonian Institution restore a giant 15-star American Flag that had flown over Baltimore’s Fort McHenry during the War of 1812.

In 1814, Francis Scott Key, an American lawyer, had boarded a neutral ship off Fort McHenry to negotiate the release of a U.S. prisoner the British had taken while sacking Washington, D.C.

From shipboard, Key witnessed an overnight British bombardment of Fort McHenry. By the dawn’s early light, he could see that the fort had withstood the assault. The flag was still there.

Enthralled, Key took to writing a poem about it. In 1931, the United States proclaimed “The Star-Spangled Banner” America’s National Anthem.

George Key learned of his family’s Key lineage early in life, born in 1924 in the U.S. Panama Canal Zone. His father, a government employee there, was patriotic. George had half-brothers named Francis Scott Key and Patrick Henry Key.

The family moved to California, his daughter said, and her father was in high school in Glendale when World War II broke out. After a year of community college, he enlisted in the Army in 1943 to train as a combat engineer.

After the war, Key returned to Glendale and married his wife, Mary Margaret. They raised three children: Georgia, Carol and George.

After being recalled into the Army during the Korean War, Key made a career with Glendale’s Department of Water and Power.

“The flag carries special significance for him,” his profile in the WWII book says. “It is also a reminder of all that has been sacrificed for the nation he loves and the opportunities he has been given.”

A military service and a celebration of life for George Key will be scheduled “at a much later date, when people can safely attend,” Georgia said. Survivors include Key’s daughters and son, their spouses, four grandchildren and nine great-grandchildren.