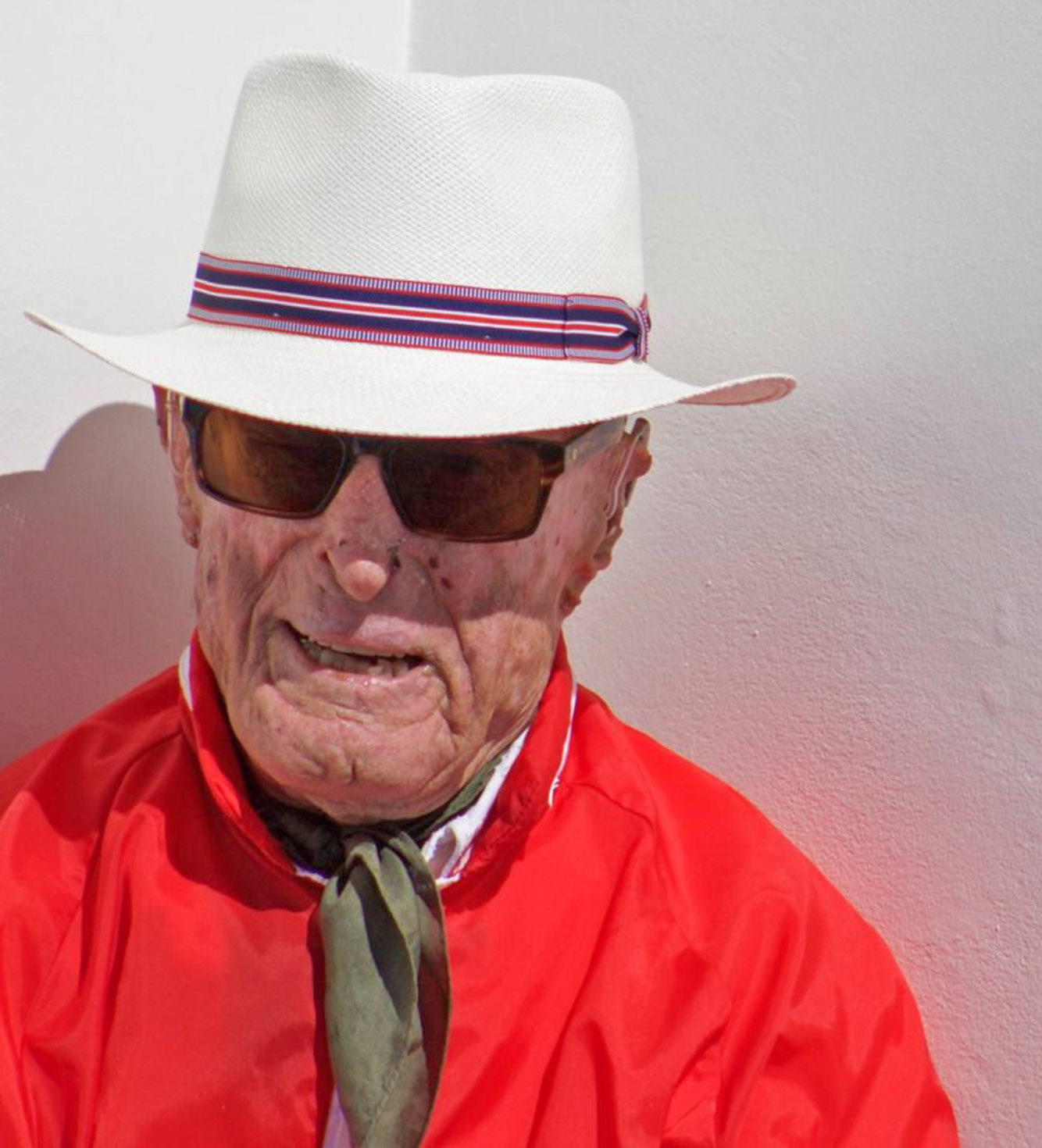 Chances are, sometime over the last 40-plus years, you noticed a retired gentleman on one of his 5-miles-a-day walks around town, wearing a distinctive flat-brim straw hat.

If you ever engaged him in conversation, you likely never forgot him, even if you never learned of his decorated Air Force career.

“He is the town,” she told the Orange County Register on the occasion of Thacker’s 100th birthday on Feb. 21, 2018. “He can say hello to anybody. He has been attacked by dogs, he’s been hit by a car, he’s fallen over, and he just keeps getting up and walking forward.”

The illustrious retired aviator probably is somewhere in the sky doing that right now.

On Feb. 21, 2021, which would have been his 103rd birthday, family and friends will gather near the pier to remember him, as a family friend performs a fly-by salute.

“The Colonel wished to be cremated and his ashes scattered over the Pacific,” his daughter, Barbara Thacker, wrote in his obituary.

Col. Thacker is best known for the morning of Dec. 7, 1941, when he was peacefully passing over Oahu’s Diamond Head, having piloted an unarmed B-17 overnight from California with other B-17s being transferred for deployment in the Pacific.

Thacker and his crew noticed something inexplicable ahead. Suddenly, they found themselves flying smack into a surprise Japanese attack on Pearl Harbor.

Low on fuel and needing to land immediately at Hickam Field, Thacker had to dodge bullets while descending amid the inferno. He managed to land safely, despite his landing gear being shot and crippled. He warned his crew not to run to the hangars, but to hide in a nearby swamp.

Thacker went on to become one of the few pilots serving in both the Pacific and European theaters of World War II. He later flew the B-29 in the Korean War and flew classified high-altitude reconnaissance missions in the Vietnam War.

ON TO SAN CLEMENTE

Retiring from the Air Force in 1970, Thacker and his wife, Betty Jo, settled in San Clemente. “They retired in San Clemente,” daughter Barbara explained via email, “because it was a darling little village and was right next to Camp Pendleton and El Toro Marine Corps Air Station (active in 1970), where they were able to use their military benefits.”

Born in 1918, Thacker grew up in El Centro, took up building model airplanes at age 8 and was the Southern California yo-yo champion in 1932 at age 14, his daughter reported. That same year, he joined a model airplane club, little realizing that in 2010 he would be inducted in the Academy of Model Aeronautics Hall of Fame.

Enlisting in the Army in 1939, he attended pilot academy. The rest was history. During WWII, he earned two Silver Stars, three Distinguished Flying Crosses, 10 air medals and the French Croix de Guerre with palm, the family reported.

After the war, he tested new varieties of military aircraft. He also set an aviation record that still stands.

It was in 1947 that Thacker and his copilot, John Ard, set out from Honolulu to fly a twin-engine, propeller-driven fighter plane nonstop to New York City.

As he stated at his 100th birthday party, there were tense moments during the 14 hours, 33 minutes it took to fly 5,051 miles. One of the plane’s four fuel tanks wouldn’t release.

“That threw my whole fuel control all out of kilter,” Thacker recalled. “The whole thing had to be refigured while I was airborne.”

Each time he arrived at a targeted point on the flight map, he had to recalculate how much fuel he still had.

“The longer I flew, the better fuel I had, because I was lighter,” he said. “My fuel was continually changing. I knew what I was doing. At the end, I knew I could just make New York.”

The Air Force Museum recognized the plane named Betty Jo—so named in honor of his wife—and its fliers for the longest and fastest (average 350 mph) flight by a propeller-driven fighter plane.

“He said it wasn’t really a walk,” daughter Barbara said. “He said, ‘I’m going to the beach to see the girls.’ He told my mom that every day. It took like four hours, because he stopped so many times along the way. He got to make so many friends.”

At 95, The Colonel began choosing shorter distances for the daily walks. While resolute, he almost didn’t make it to his 100th birthday.

When asked at the party if his Dec. 7, 1941 surprise over Pearl Harbor was the closest call of his life, he replied, “I’m sorry to say, but Dec. 17 was harder.”

That meant Dec. 17, 2017, when Thacker, on one of his walks, was struck by a car in an El Camino Real crosswalk, just two months before the centenary party he’d invited a multitude of friends to join him for in 2018.

“For most 99-year-olds, the medical prognosis from bleeding on the brain, a bruised head and lacerations to the head and body would seem bleak,” I wrote in my account of Thacker’s birthday party. “But ‘The Colonel,’ as he is known around town, is not most people.”

He amazed his doctors during a three-week stay at Mission Hospital. Sent home, he let it be known that the party was still on.

“You’ve got to just pucker up and press on,” he said.

Thacker then worked his way back into resuming walks, albeit shorter ones.

“He is amazing,” neighbor Jim Rutter said. “He is out walking around the cul-de-sac.”