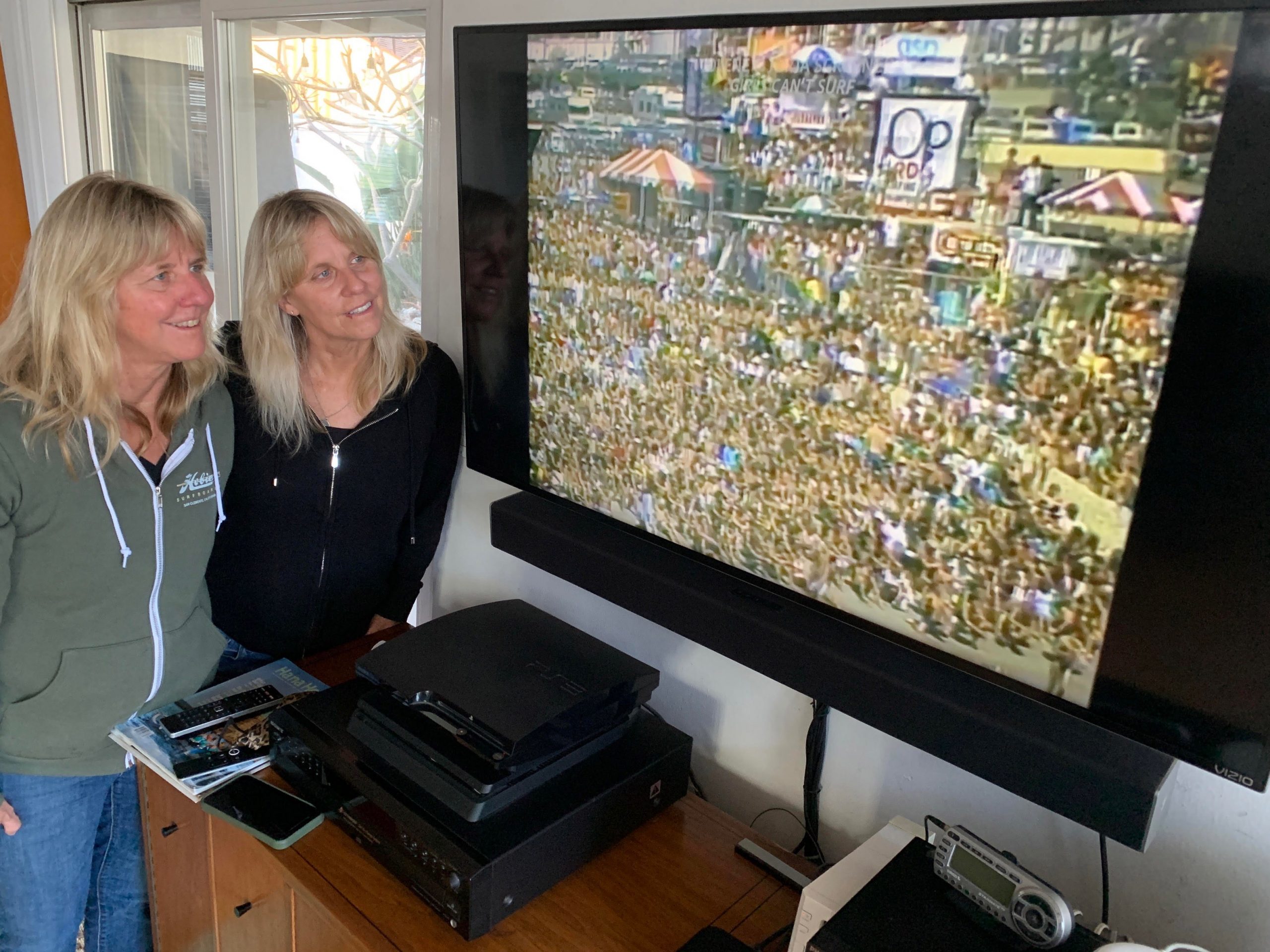 A documentary movie currently appearing in theaters in Australia is shedding light on how two young pro surfers from San Clemente called out the surf industry 32 years ago and helped change the landscape for women’s surfing.

The film Girls Can’t Surf features a largely Australian cast of women pros “who took on the male-dominated professional surfing world to achieve equality and change the sport forever,” the storyline goes.

Jolene and Jorja Smith, twin sisters from San Clemente, were flown to Australia in 2019 to relive their 1980s experiences for portrayal in the movie.

During their first four years on tour, the twins came to live with twin realities—women being paid less than male pro surfers and regularly being forced to compete in the worst surf conditions on any given day. Men’s heats were reserved for the best waves.

Even so, the twins lived out their dreams, surfing around the world, having fun. The Smiths were laid-back, easygoing personalities but felt compelled in 1989 to put their foot down.

A “Dear Surfer” letter from Ocean Pacific informed the twins that the world’s biggest surfing spectacle, the Op Pro Surfing Championships at Huntington Beach, was dropping its women’s competition in order to offer more prize money to the men.

“For Jorja Smith, it was like going from the top of the world to the darkest depths of the ocean,” I wrote then in the Daily Sun-Post, announcing the news.

Jorja had won the Op Pro the previous year and was eager to defend her Op title. Now, there was the possibility that Ocean Pacific’s business decision could jeopardize the future of women’s pro surfing.

The twins wrote, “We can’t help but feeling that the Op Pro is turning into a circus” by dumping women athletes while showcasing the Op Pro’s annual “Miss Op” bikini contest.

Articles published in Southern California newspapersspread the twins’ grievance of unfair treatment of women athletes. Letters to the editor, protest letters to Op and to the city of Huntington Beach and support from people the twins knew in the surf industry followed.

“We were starting to generate enough negative press against Op that they changed their mind and put it back on,” Jorja says in the movie.

“It felt great that we actually stood up for ourselves, not just for us, but for any other woman surfer that came along after us,” Jolene says in the film.

“We were so upset that we couldn’t have a contest in our own backyard,” Jolene told CoastLines last weekend in San Clemente. “It was a huge contest. It was like the Wimbledon of pro surfing. We just thought this is not right, and if Op does this, all other contest sponsors could follow along and there might not ever be a women’s event.”

“It was a big blow to us,” Jorja said. “If the Op drops women, it’s just going to be the domino effect. Every major contest is going to drop the women. Fortunately, we drummed up enough negative press. They found the money again.”

RISING TO THE TOP

They were consistently in the top 10 of the women’s world tour through the 1980s. They never got to see women pros achieve pay parity with men—which today’s competitors have attained—and didn’t realize they were trailblazers.

“We just wanted to be pro surfers and have fun and make money and be good at what we did,” Jolene said.

“We wanted what we were seeing the men getting,” Jorja said. “We had that vision. We had the dream. But equal prize money? I didn’t think in my lifetime, I would see that. We’re super stoked for them.”

Watch for announcements of Girls Can’t Surf coming to the USA. Locally, the twins said, the timing may hinge on California’s pandemic scenarios.

A FEW WORDS WITH THE TWINS

Where did you travel on the women’s world tour?

How did fans treat you?

Jolene: Generally supportive. We would sign autographs. They wanted pictures taken with us.

What about male competitors?

Jorja: Some were really supportive … really encouraged us. Some didn’t really care for the women and just thought we were wasting time and taking away their prize money.

What does this movie mean to you?

Jolene: It brings back a lot of great memories. We had a lot of great times, great camaraderie among us girls. We were friends on land, enemies in the water. We’re glad we stuck with it. We’re so glad we got the opportunity to have fun and travel. We have lifelong friendships now.

Jorja: The movie is a great tribute to the women before us in the ’70s, and the women making equal prize money. It feels good to get a little bit of acknowledgment and adoration from the surf industry, a little more acceptance from the surf culture that we didn’t really have back in the ’80s. But we did have fun.

Do you both still surf?

Mostly on the weekends.

International tour: Jorja consistently ranked in the world’s top five. Jolene was regularly in the top 10.