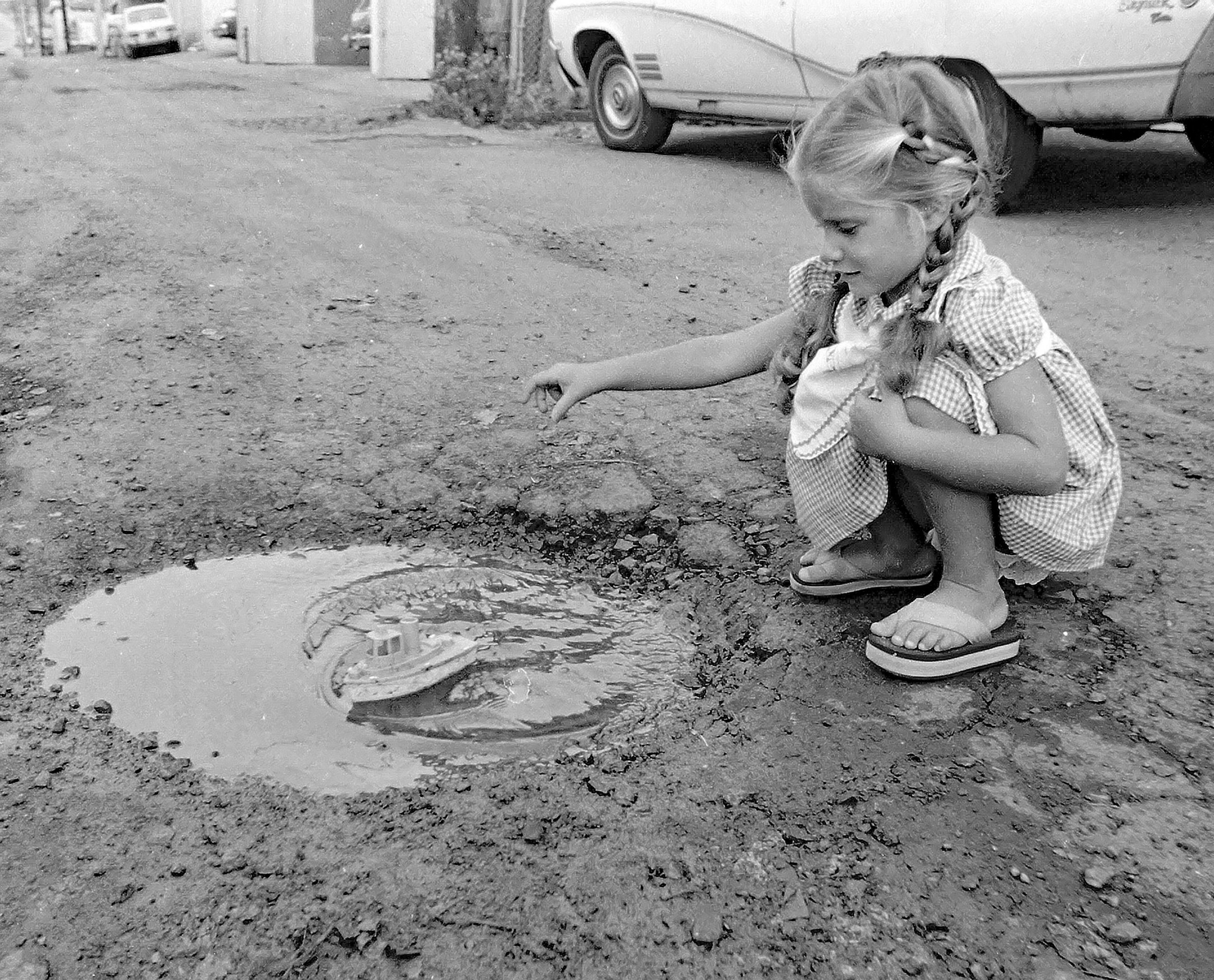 There was a time when San Clemente was famous for the quality of its streets.

Our streets, in the most historic parts of town, were holier than thou.

They were pothole-prolific, a laughingstock—unless it was the tires of your vehicle or bicycle that plunged into a particularly nasty sinkhole.

We lived with those pockmarked streets daily. Visitors encountering potholes on their way to the beach may have nicknamed us San Calamity.

Thankfully, potholes are no longer a chronic, widespread affliction on San Clemente’s streets.

In the 1970s, jokes about our town’s potholes were so rife that I was able to introduce a unique new weekly feature in the Daily Sun-Post.

We called it “Pothole of the Week.”

Readers could nominate their favorite pothole, describe why it deserved notoriety and send me its location.

I would select a winner and picture the pothole with a toy car inside it.

I started out with a tiny plastic car that could fit in the palm of my hand. Later, I upgraded to a plastic DC-10 airliner, its widebody the size and shape of an egg, with wings and a tail attached.

Some weeks, there was intense competition. We allowed a runner-up pothole to compete in succeeding weeks. There was little danger a runner-up pothole would vanish before we got to it, since the street department was hopelessly backlogged, trying to apply roadway Band-Aids.

The city had a scant tax base back then. There were no resources to reconstruct all our aged streets, much less patch the widespread cobwebs and craters.

Evidently, the street department began trying to outguess me from week to week. One week, the street crew succeeded in patching a pothole before I could photograph it. I had to give them credit.

I made it “Pothole of the Week” anyway.

“Score one for the city,” I wrote.  “Tuesday, the Sun-Post received what sounded like a pretty prodigious nomination for ‘Pothole of the Week.’ ”

Any number of other potholes on that street could have been nominated but weren’t.

“Is it possible to nominate a whole street for ‘Pothole of the Week?’ ” reader Scott Walker had written. He had to pick out one pothole. And it needed to be superior to all others on that street.

“I painted a white circle around it, if by some remote possibility you can’t find it,” he wrote.

When I got there with my camera, “Wowee, there it was,” I wrote, “white circle and all.”

Only one problem: The city had already patched it.

“Calle Mirador still had plenty of other craters far and wide, but this one with the circle around it was patched,” I wrote.

I took a picture of the patch with my egg-shaped DC-10 jumbo jet.

“Photographer Fred Swegles’ DC-10 tries to take off on a newly patched pothole on Calle Mirador,” the photo caption said. “If it can get by those two rocks, it might make it.”

I could envision the pothole-patchers high-fiving each other over a six-pack of beer after work the day it came out in the newspaper. They had trumped me.

It wasn’t fair. The painted circle had tipped off the street department.

The prize-worthy pothole I never got to view must’ve been a doozy.

“If you hit the thing properly,” the pothole nominator had written me, “you can actually see Laguna Beach.”

I tried to picture Walker’s automobile going airborne sufficiently for him to see Laguna Beach over Dana Point. It would be sort of like my plastic DC-10 lifting off from LAX.

I endowed the city’s patch job with the title of “Pothole Emeritus, now retired temporarily from active duty.”

WHERE DID THE POTHOLES GO?

In 1995, the city council ended decades of street notoriety with a controversial 4-1 vote to impose a property owner assessment—up to $90 a year—to reconstruct more than 60 miles of awful residential streets and collector streets.

More than 4,000 signatures appeared on petitions presented to the council, demanding the city find cuts in the existing municipal budget to fund the fixes.

The city council decided to press on with the assessments, having just struggled through successive years of budget headaches that had included appointing a citizens’ Blue Ribbon Committee to recommend budget cuts and the painful loss of San Clemente’s own police and fire departments to reduce expenses.

Legally, the council could impose the assessment, just a year before California voters passed 1996’s Proposition 218, banning this very type of assessment without voter approval.

It took until 2011 to fully reconstruct all the ancient streets. Over that time, San Clemente improved its tax base somewhat, and since the city finally had a clean slate of newly constructed streets, the council decided it could budget enough money each year to keep the once-wretched streets looking nice, with no need for asking voters to accept more assessments.

So, we no longer have reason to publish a “Pothole of the Week.” The only surviving pockmarked stretches of pavement in town are alleys.

There is hope today for those long-weathered alleys—a five-year plan to rehabilitate the alleys.

The plan appeared in last year’s city budget, proposing to spend $690,000 a year. It could begin this coming year, if the city council is able to confirm funds are available in this spring’s budget deliberations.

Keep your hand-sanitized fingers crossed that the pandemic won’t delay the alley fix.

One of my all-time favorite “Potholes of the Week” was in one of those alleys. It still looks much the same today, some 40 years later, between Avenida Florencia and Boca de la Playa.

The crater was so deep that neighborhood resident Jessica Bishop, then 4 years old, was pictured floating her toy boat in it.

I imagine Jessica’s toy boat hasn’t lived on, but its legacy has.