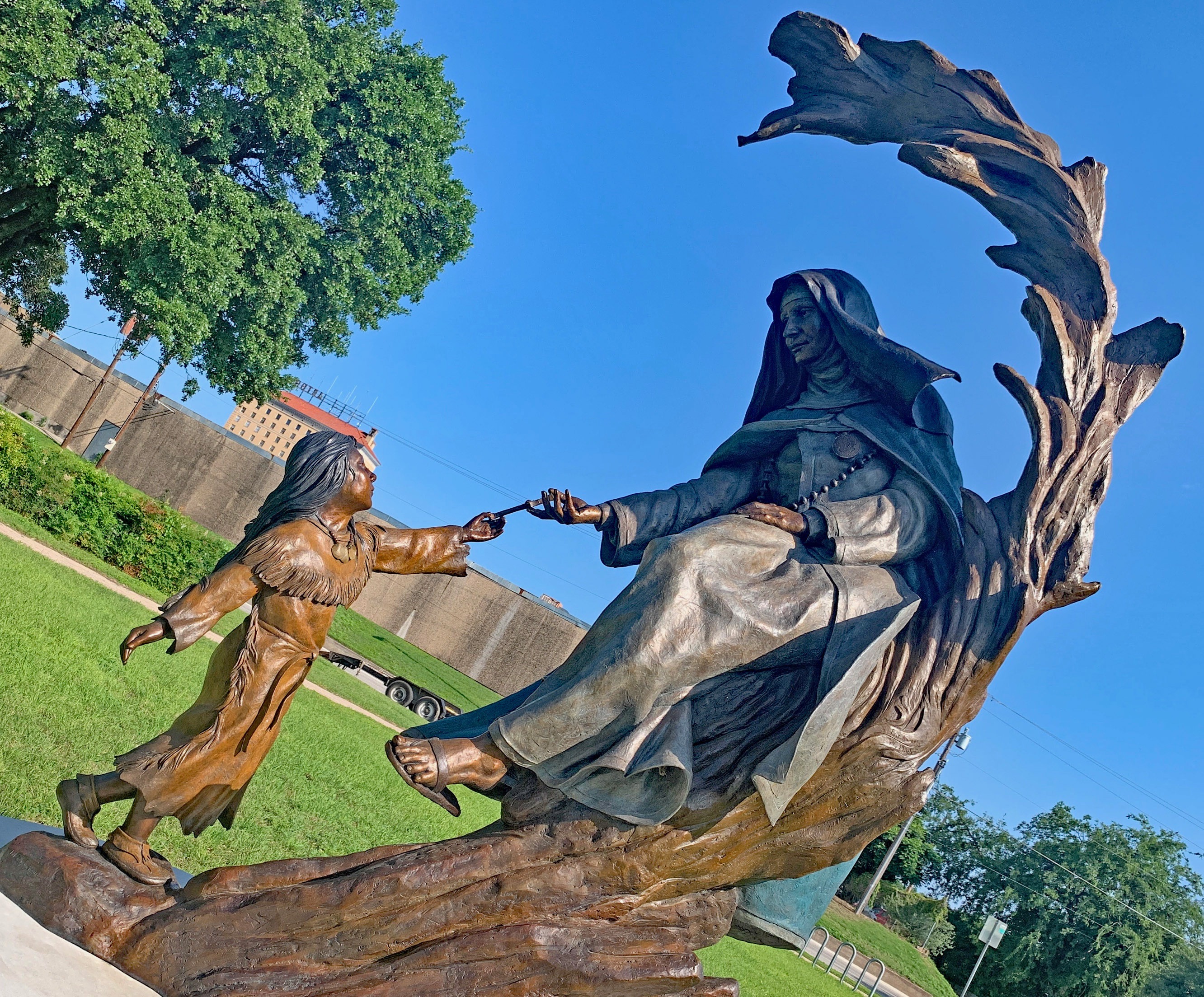 Everyone remembers the Alamo. We learned about it in school.

For all its notoriety, the Alamo was but one of 28 Catholic missions built across Texas from 1632 to 1793. It was far from the first.

The first was Mission San Clemente.

Never heard of it?

The website TexasMissionGuide.com describes a modest wooden structure, erected in 1632 in the wilderness near the junction of two rivers, the Rio Concho and Rio San Clemente. After six months, the Spaniards departed, harassed by hostile Apaches, promising to return. The local Jumano Native Americans desired an alliance, historians said.

More than 50 years later, Mission San Clemente was restarted “by the expedition of Juan Dominguez de Mendoza while it was camped on a river named ‘the Glorious San Clemente,’ from March 16 to May 1, 1684,” says the Texas State Historical Association. Once again, the mission didn’t last.

Today, the Alamo is the pride of San Antonio. A national park there showcases four other San Antonio missions. One is Mission San Juan Capistrano, established in 1731, with a church that is still active, eight miles south of the Alamo. Visitors can explore trails, ruins, a Mission SJC museum and a San Antonio River walk.

“There is also a Mission San Juan Capistrano in the California mission system,” the website TexasMissionGuide.com says.

Visitors to the Alamo relive Texas’ daring 19th Century revolt from Mexico and a brutal 1836 battle in which 200 vastly outnumbered Texan defenders were overwhelmed by Mexican forces.

“The exact location is not known,” says TexasMissionGuide.com. “There are several different historical markers in the area claiming to mark the site of the mission.”

The best-known marker is along Highway 83, between Ballinger and Paint Rock.

Ballinger, south of Abilene, calls itself “The Greatest Little Town in Texas.” Some 260 years after Mission San Clemente’s birth nearby, Ballinger gave birth in 1892 to David Guion, a concert pianist and composer. His infectious 1930 arrangement of a hand-me-down ballad transformed “Home on the Range” into an American cowboy anthem.

The two rivers join, east of Paint Rock, at a reservoir, where a little-known historic marker salutes Mission San Clemente. It’s on private property, inaccessible to the public. Ten miles south, in Millersview, Our Lady of Guadalupe Catholic Church erected its own marker in 1984 to commemorate the 300th anniversary of the second Mission San Clemente.

Neither historic marker mentions “Rio San Clemente.” The name Rio San Clemente faded into history, just as the mission did in 1684. The river once called “San Clemente” now is just a short leg of a much longer river, the Rio Colorado.

Texas’ grandest river runs 862 miles from northwestern Texas to the Gulf of Mexico. It shares names with a more famous Colorado River that winds 1,450 miles from Colorado into Mexico. That Colorado supplies the South Orange County cities of San Clemente and San Juan Capistrano with much of their water.

Texas’ Colorado is no slouch. It’s “truly the lifeblood of our state,” the Colorado River Alliance states.

Imagine if explorer Mendoza, eyeballing “the Glorious San Clemente” river in 1684, had known he could have followed it all the way to the gulf.

The state capital, Austin, showcases the Colorado with a riverwalk. About 150 miles downstream, the Colorado empties into the gulf.

There, in 1685, French explorer La Salle tried to establish a French colony. Its brief, unsuccessful presence startled the Spanish, who then directed their energies to eastern Texas to prevent French settlement.

Mission San Clemente, the vanished first Spanish mission in Texas, may have been near this spot, along a stretch of river once called the Rio San Clemente, now part of Texas' Colorado River. Photo: Fred Swegles

Texas' Colorado River, an upper portion of which was once called the Rio San Clemente, meets the Gulf of Mexico at Matagorda Bay, where a 40-foot statue salutes the French explorer La Salle. His attempt to colonize that region startled the Spanish owners of Texas, shifted Spanish priorities and may have helped seal the demise of Mission San Clemente. Photo: Fred Swegles

This historical marker, located at a reservoir that joins two Texas rivers, speculates that Texas' first Spanish mission was built somewhere close by. No one knows exactly where. Photo: Fred Swegles

This historical marker outside Ballinger, Texas, pictured with writer Fred Swegles, salutes the 1684 founding of a second Mission San Clemente. It didn’t last, nor did the one that preceded it in 1632. Photo: Fred Swegles

Texas' Colorado River, an upper portion of which was once the Rio San Clemente and was home to the Mission San Clemente, grows as it winds its way to the Gulf of Mexico. Photo: Fred Swegles

Shrimp boats are a mainstay along Texas' Colorado River, where it meets the Gulf of Mexico, hundreds of miles southeast of where a segment once called the Rio San Clemente was home to Texas' first Spanish mission, the Mission San Clemente. Photo: Fred Swegles

This monument in San Angelo, Texas, depicts an indigenous Jumano child being given religious instruction by a Spanish nun said to have never set foot in America. It ties in with the 1632 founding of Mission San Clemente somewhere nearby. Photo: Fred Swegles

A plaque in Millersview, Texas, outside Our Lady of Guadalupe Catholic Church, was erected in 1984, the 300th anniversary of the 1684 establishment of Mission San Clemente somewhere nearby. The exact location isn't known. Photo: Fred Swegles

Swallows feed on insects over a river once known as the Rio San Clemente, outside Ballinger, Texas. Today, this river is a segment of Texas' grandest river, the Colorado. Photo: Fred Swegles

This hotel sign in San Angelo points out the region where Texas' first Spanish mission, Mission San Clemente, was established in the 1600s, near the confluence of two rivers, the Concho and the San Clemente. The Rio Concho runs through San Angelo. Photo: Fred Swegles

Texas' Colorado River runs through the state capital, Austin, where a riverwalk salutes the late Stevie Ray Vaughan, blues guitarist. The upper reaches of this river once were known as Rio San Clemente. Photo: Fred Swegles

Modern-day explorers who want to search the upper reaches of the Colorado for evidence of the vanished Mission San Clemente can start at San Angelo.

Stroll along a scenic Concho River Walk. A historic marker there recognizes the 1632 “founding of the first mission ever in Texas, near this site.” There’s also a bigger-than-life statue of a Spanish nun, “The Lady in Blue,” depicting her ministering to a Jumano child.

Spanish missionaries arriving to explore Texas “were often approached by groups of native peoples, mainly the Jumanos, who asked not only for baptism but additional religious instruction, claiming that a woman had come to them and preached to each of them in their own language,” San Angelo’s diocese proclaims.

At McCamey, Texas, a historic marker at the Mendoza Trail Museum describes how Mendoza’s expedition began in 1683, 12 miles below El Paso. A party of 35 was tasked with exploring the Pecos Plains, harvesting pearls from Texas rivers and Christianizing Jumanos.

“They found ‘many pearls’ near present-day San Angelo,” the marker says. “And at the confluence of the Concho and Colorado Rivers, they founded San Clemente Mission.”

Franciscan missionaries were said to have baptized 2,000 Jumanos, long before other Franciscans would perform California’s first baptisms in 1769 just outside a coastal plain that in 1925 would be named San Clemente.

“Each was a fortified village, with its own church, farm and ranch,” a Mission San Juan storyboard states. “Here, Franciscan friars gathered native peoples, converted them to Catholicism, taught them to live as Spaniards and helped maintain Spanish control over the Texas frontier.”

This Capistrano mission came 45 years before the one that Franciscan Junipero Serra would establish, 1,200 miles west, in 1776.

Tourists visiting Texas’ Capistrano mission are unlikely to find any swallows or swallows’ nests, the claim to fame of our San Juan Capistrano.

But about 200 miles northwest of Texas’ Mission San Juan, swallows sometimes do swarm outside Ballinger, inhabiting a rural stretch of the river once dubbed “the Glorious San Clemente.”