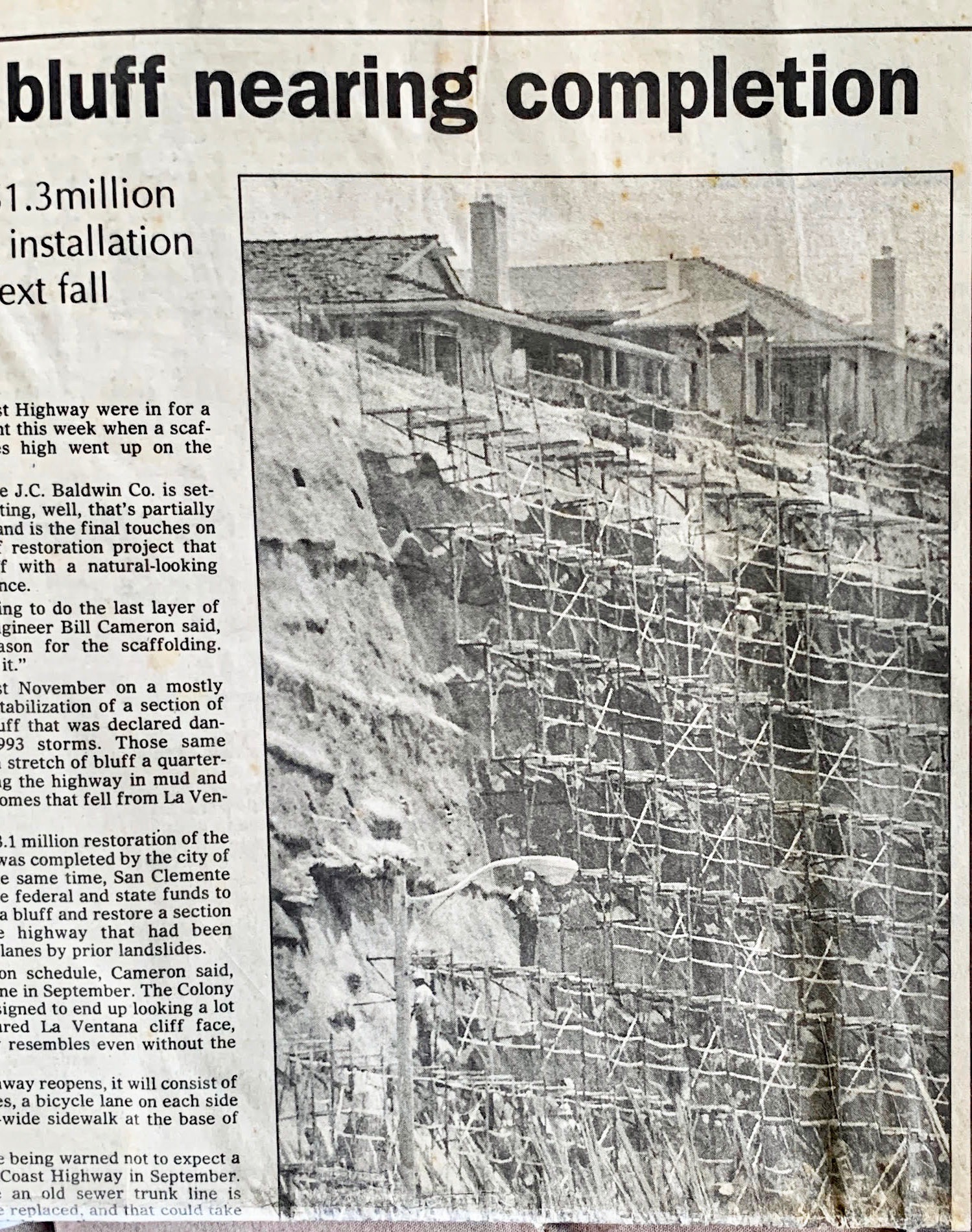 Let’s take a peek back 25 years: Were San Clemente residents excited—or exasperated—to learn that our town in 1996 was about to become home to its grandest retail store, a Walmart?

Or what did San Clementeans prefer to see on the vacant 250-acre Marblehead Coastal palisade, as developers were formulating plans?

What option should the city select to preserve and make use of the historic Casa Romantica, which the city had purchased to consider ways to preserve as a blufftop landmark?

How did San Clemente locals and the business community react to Beach Trains, aboard which Metrolink began shuttling hundreds of Inland Empire residents to our pier on selected summer weekends?

Who remembers when two gaping holes were opened in the fabric of Downtown San Clemente, the closure of two major businesses?

The Cornet store, a longstanding anchor enterprise on the corner of Avenida Del Mar and Ola Vista went vacant, eventually to be replaced by Avila’s El Ranchito, the Beachfire California Bar & Grill and other businesses. Also closing, immediately across the street, was another high-profile corner business—a bank, First Interstate, which today is H.H. Cotton’s restaurant.

On a positive note, along Camino de los Mares, ground was broken to build Krikorian Premiere Theatres’ San Clemente Cinema Six, which would bring movies back to San Clemente for the first time since the 1992 closure of the historic single-screen Miramar Theatre. Krikorian would close in 2017.

How many of these news items do you remember? Or if you weren’t here then, what do you think about how things turned out?

A SNAPSHOT OF 1996 NEWS STORIES

New look for a street: Avenida Valencia, a potholed gateway into San Clemente from the freeway, became one of the first residential streets in town to be reconstructed under a $49 million plan to reinvigorate oldtown’s aging, crumbling street system.

Steed Park: A city park concessionaire walked away from his lease, leaving the city to take over operation and maintenance of a four-field softball operation.

Beach parking fee: The city council reduced a beach parking impact fee that all new homes built inland of I-5 were required to pay. The fee was lowered from $1,500 to $750, after the city realized a parking structure never would be built at the pier, heavily opposed by residents. Parking impact-fee revenues thereby would be directed toward less-expensive parking improvements, the city said.

A new route: The city built a new road linking Avenida Pico with Camino de los Mares. Initially, it was to be called Camino Vista Pacifica, but it was renamed Camino Vera Cruz.

Skatepark: A group of skateboarders formed a coalition to try to raise money and urge the city to build a skatepark for San Clemente.

Dog park: A group called FIDO disbanded after 16 unsuccessful months of campaigning to try to persuade the city to develop a dog park. FIDO donated its $1,500 treasury to Friends of San Clemente Animals in support of the local animal shelter.

Forster Ranch: A neighborhood controversy over whether the city should include sports field lighting threatened to postpone development of long-awaited Forster Ranch Community Park.

Casa Romantica: The Fisherman’s Restaurant, which had a lease agreement with the city to protect its exclusivity radius, locked horns with the city over a proposal to turn the city-owned Casa Romantica landmark into a high-end restaurant with connectivity to the Pier Bowl below by a funicular or walkway

Sports Hero: San Clemente presented a key to the city to volleyball star Karch Kiraly when he returned home with his gold medal from the 1996 Olympic Games in Atlanta.

Cultural Center: A movement arose to turn Casa Romantica into a nonprofit cultural center, instead of preserving the landmark as a restaurant accompanied by timeshares.

Town survey: A group calling itself the Spanish Village by the Sea Visionaries took its own surveys of what people thought was right or wrong with the town, suggested improvements, what types of new businesses the town would like to see and what type of Marblehead Coastal development residents would prefer.

Beach Trail:  The city obtained $1.4 million in state and federal grants to study how and where to develop a beach trail from North Beach to the pier, with safe RR crossings at intervals, and possibly on to Calafia Beach.

Downtown evolution: Avenida Del Mar took on a new look with the opening of some trendy specialty stores.

Toll road: As the 73 Toll Road opened to commuters, the city council considered whether to withdraw its earlier support of a proposed 241 Toll Road route designed to run behind San Clemente to Basilone Road.

North Beach: Amtrak quit stopping trains at the pier, choosing instead to stop at a new Metrolink station that opened at North Beach in 1995. Amtrak soon returned its stops at the pier.

Housing development: There were indications that a stalled Forster Ranch community development might restart; also, work might begin on a stalled plan to introduce Talega, designed to be San Clemente’s biggest community.

Outdoor dining: The city introduced a permit process and rules to allow restaurants to set up tables and chairs on sidewalks.