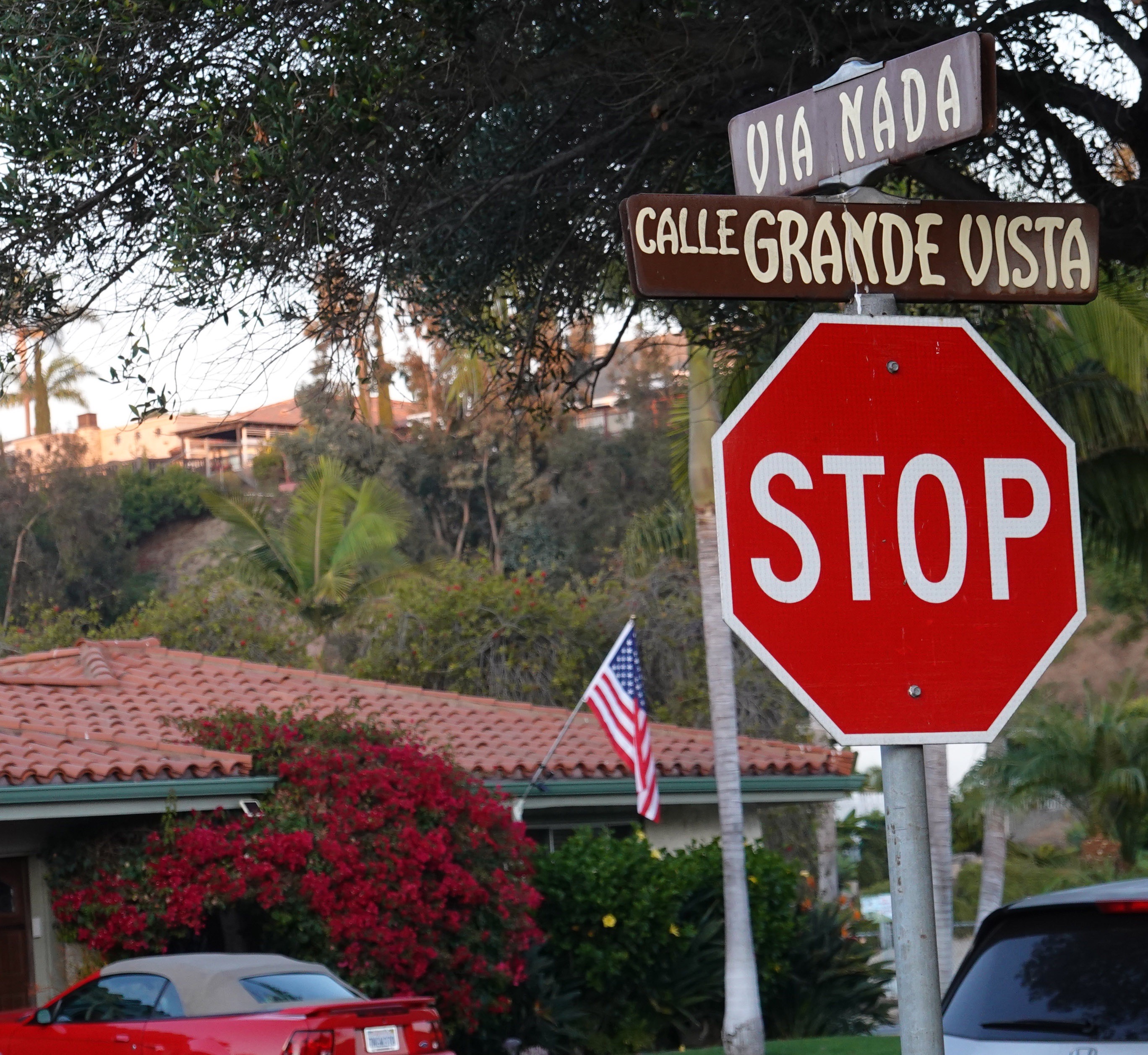 CoastLines: Some of Our Spanish Street Names Are a Mouthful

How would you like to live on Pimple Street?

I’m not suggesting that we have a Zit Street in San Clemente. But I must admit, the name of one of our streets, Via Pimpollo, makes me chuckle.

In my warped mind, in fractured Gringo Spanish, it makes me think, “El Pimple!”

In reality, the word pimpollo (pronounced pim-POY-o, as in “El Pollo Loco”) can mean either “rosebud” or “tree sapling.” Or, in street talk, it can refer to an attractive person, as in calling someone a babe, which is actually kind of nice.

When Ole Hanson founded San Clemente in 1925 as a Spanish Village, he mandated all streets to have Spanish names. And never mind if some might be mispronounced or misconstrued.

At a meeting I covered in 1981, the city council directed city staff to provide translations for all San Clemente’s streets, so councilmembers could decide if any needed changing.

One councilmember decried what he called “dopey street names” such as Via Bandita and Via Nada, which he translated as Bandit Street and Nothing Street.

“If you knew what they meant, you would be appalled,” he said. “You wouldn’t want to live there.”

I had always wondered why a housing developer, submitting names for city approval, would name a street Nothing Street. And the city was fine with it.

In 1981, we were told that the city tries to select pleasant-sounding Spanish names. That, of course, assumes you can pronounce them.

It rolls joyfully off the tongue, doesn’t it? No clueless Gringo would ever guess it means Zit Street.

Another Spanish word for zit is grano, pronounced GRAW-no. There’s not much danger of us ever naming a street that. It doesn’t sound pleasant to me. In fact, it almost sounds like guano, which is bird excrement.

Nothing ever came of the city council’s directive, or at least I don’t recall it. In fact, homes were built a decade later on Via Pimpollo, so I guess the street name Pimpollo passed muster.

Some street names submitted by developers didn’t pass. One was Calle Sucia (SOOH-see-uh). Another was Calle Nuez (NEW-ehz). How would you like to tell everyone you live on Dirty Street or on Nut Street?

My jaw dropped one day, years ago, when I went to do an interview on a San Clemente street named Pavoreal (PAH-voh-ray-AHL).

“Did you know you live on Royal Turkey Street?” I asked.

In Spanish, pavo means turkey, and real means royal. Only after returning to the office and consulting my Spanish dictionary did I realize I was wrong. The words pavo and real, when joined together, mean peacock. And it certainly makes sense. What is a peacock but a very royal-looking turkey?

Once, when a Mexican friend from San Jose del Cabo was coming to visit his daughter in Los Angeles, I drove him up from Tijuana Airport, and he burst out laughing as we approached San Clemente. He couldn’t believe anyone would name a road Las Pulgas. In Spanish, it means The Fleas. Were we really bragging about being flea-infested?

I risk spewing coffee out of my nose anytime I hear my favorite mangled Spanish word on radio traffic reports for the “Los Feliz” section of Los Angeles. They pronounce it “Los FEE-liz.”

That’s so wrong. They should have to apologize.

How hard can it be? Think Jose Feliciano’s song, “Feliz Navidad!” Everybody, let’s all sing it now! Doesn’t it have a nice, cheerful, melodic ring to it? And it should.

In Spanish, Los Feliz means “happy people.” Not “touchy FEE-ly people,” trying to poke you in the side every chance they get.

If you ever blurt out “Los FEE-liz” in freshman Spanish, you’ll get an F-minus.

Even sillier is San PEE-dro. “Let’s all take a PEE in San PEE-dro!” I can just imagine Little Johnny, the bratty protagonist of “Little Johnny” jokes, smirkingly saying it for all to hear.

Is it really so difficult to pronounce Pedro as PAY-dro? Don’t we have enough big-league baseball Pedros that everyone can say it without pulling a Peedro?