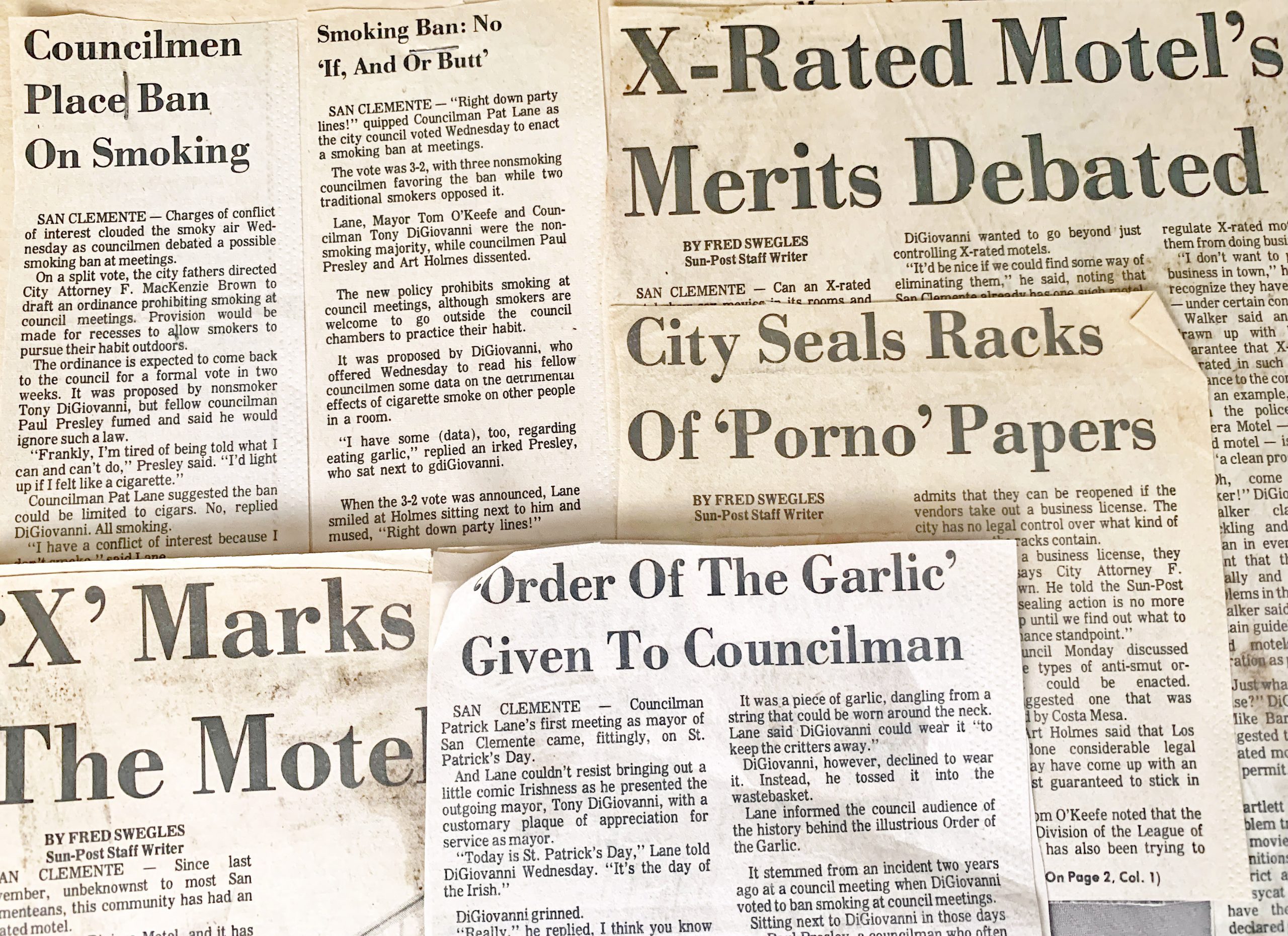 One evening in the 1970s, San Clemente Mayor Tony DiGiovanni made an astounding announcement—he’d discovered a scandal in our peaceful little downtown.

“In color, in front of God and everybody,” the mayor proclaimed, “there was just no question as to what this couple was doing.”

“The couple was doing it on the cover of a swinging singles newspaper in a news rack on Avenida Del Mar,” DiGiovanni declared in the Daily Sun-Post, our five-day-a-week local newspaper.

“We can eliminate this trash, this material that’s being foisted particularly on our younger generation,” the mayor said.

So, the city sealed the news racks shut and looked for legal ways to keep vendors from taking out a local business license to distribute the magazines.

‘MAN OF THE WORLD’

“I think I’ve been a man of the world, as the average man has, but there were some pictures that I was very shocked (with),” said DiGiovanni, a devout churchgoer.

A Daily Sun-Post profile told us how DiGiovanni had grown up in West Virginia in a large Catholic family that valued its Sicilian ancestry. While in high school, he worked in steel mills to help his family, then served as a Marine Corps pilot in WWII Pacific venues at Guam, Saipan and Iwo Jima and, in the Mediterranean, as an Italian interpreter for the U.S. Navy.

But it reminded me that DiGiovanni, Thomas O’Keefe, Patrick Lane, Charles Fox and William Walker comprised a city council of diverse interacting personalities.

They agreed on some issues, disagreed on others and delivered clever lines. It could be fun to share unlikely exchanges.

One evening, Councilmember DiGiovanni took issue with an X-rated motel that had opened along South El Camino Real.

He hoped to try to find a way to force shutdown of the Riviera.

Walker said he’d checked with the San Clemente Police Department and learned that the Riviera was operated discreetly and “has a clean program.”

“Oh, come on now, Councilman Walker!” DiGiovanni said. Walker clarified that he didn’t mean “clean in every sense,” but the motel regulated itself and wasn’t causing problems for the outside neighborhood.

The city attorney warned the mayor that it would be a problem trying to regulate X-rated motels or cinemas like Los Angeles’ famed Pussycat Theatre, where government was unable to ban the notorious movie Deep Throat.

“Tennessee found a way of doing it,” DiGiovanni told his colleagues.

LET’S LOOK INTO THIS

I visited the Riviera to view its security, how couples with reservations would enter through a security fence to park discreetly and rent a posh room.

“The deluxe rooms also come furnished with waterbeds, full-length mirrors on the walls and ceiling, velvet bedspreads and drapes, fur rugs, glowing lights and even a small hideaway roomette with velvet drapes, a mattress, and a swing hanging down from the ceiling,” I wrote.

For $30 to $35 a night, couples could watch the movies they wanted. Peter Marino, a former Anaheim motel owner who had brought his business to quieter San Clemente, came off as a nice guy, describing how smoothly his business ran and privacy measures protecting couples.

He described most guests as from northern Orange County, picking San Clemente for their getaway.

Most initial reservation calls came from women to give their husband an anniversary present or to celebrate his birthday, Valentine’s Day or other occasion, Marino said.

“Our customers come back, because they know we have nice rooms and we’ve got no problems,” he said. “It’s quiet, and it’s discreet.”

The city council discussed ways to try to shut down or prevent more X-rated motels, but the motel continued to operate for decades.

More colorful exchanges between councilmembers came in 1974, when the council, on a 3-2 vote, banned smoking at council meetings.

DiGiovanni had sat next to Councilmember Paul Presley, who smoked frequently and who became annoyed when DiGiovanni called for the smoking ban.

The Santa Ana Register, along with the Daily Sun-Post, picked up the story, describing a verbal exchange like this: “I have some information,” said DiGiovanni while thumping down a stack of literature, “regarding the detrimental effect of smoking.”

“I have some, too, regarding the eating of garlic,” Presley retorted, turning away from DiGiovanni.

Lane, O’Keefe and DiGiovanni invoked the 3-2 vote over smokers Presley and Art Holmes, to abolish smoking.

“Lane smiled at Holmes, sitting next to him, and mused, ‘Right down party lines!’ ” my article said.

No comment came from Holmes, nor from City Manager Ken Carr, who also smoked.

“Later in the meeting, however, the city manager became the first person to violate the new council ban,” I wrote. “He forgot and lit up a cigarette, only to be promptly admonished by Lane.”

“I’m tired of being told what I can or can’t do,” Presley said. “I’d light up if I felt like a cigarette.”

Soon thereafter, Presley resigned from the council over a variety of issues.

‘ORDER OF THE GARLIC’

Lane enhanced the tradition of presenting the yearly outgoing mayor with a plaque of honor. He offered DiGiovanni a bulb of garlic, hanging from a string necklace, to wear.

“It’s the day of the Irish,” Lane said. “St. Patrick came from Italy and went to Ireland. He left Italy and took up greener pastures. But we’re very benevolent and generous people, and I want to extend to you equal time for people of other origins.”

DiGiovanni wouldn’t wear the bulb, throwing it into the wastebasket. Lane continued to remind him of “the illustrious Order of the Garlic,” suggesting the outgoing mayor could wear it “to keep the critters away.”

These councilmembers generally got along well, though they disagreed at times, and it could be entertaining.

But among the biggest issues, they aimed to clean up and upgrade the Pier Bowl area, providing the town with a “Window to the Sea” by creating a grassy park to replace buildings, and try to protect San Clemente’s empty hills from being developed as intensely as much of Southern California—by requiring housing developers to put homes in clusters to preserve large swaths of open space.

But in the end, the town turned out pretty nicely.