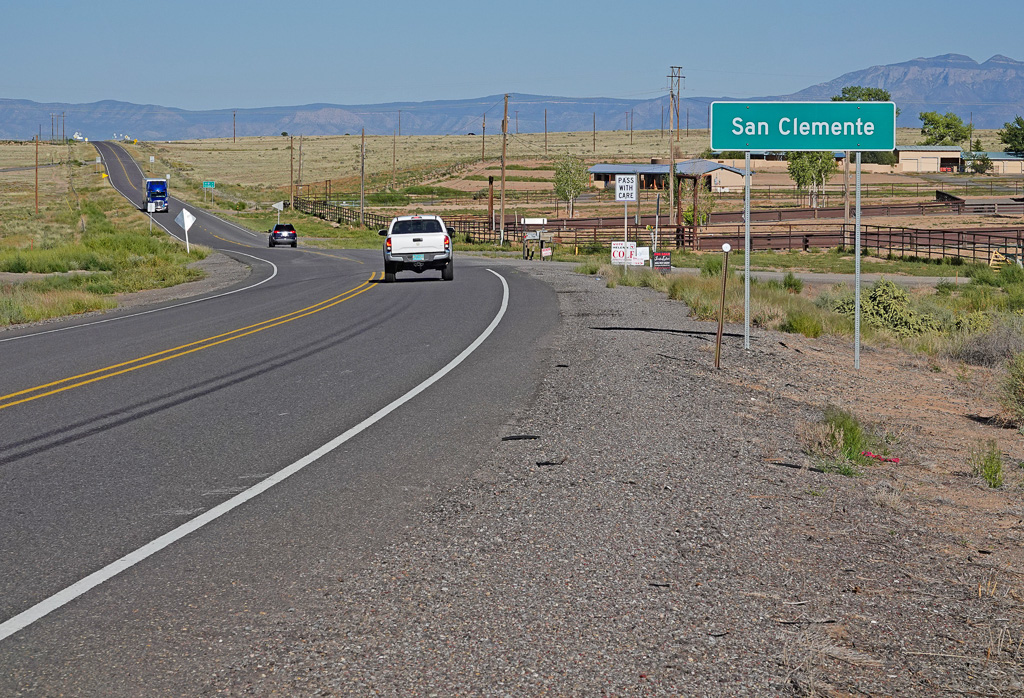 Coastlines: Spanish Village by the Land of Enchantment (New Mexico)

If you ever set out to explore historic Route 66 through the southwestern United States, make sure to cruise into San Clemente, New Mexico.

The rural enclave holds a far broader history than our own San Clemente.

Our California beach town dates back to visionary developer Ole Hanson in 1925. San Clemente, N.M., goes back to a Spanish land grant in 1716.

I went looking for San Clemente, N.M., after seeing a photo on Facebook of a San Clementean standing beside a rural roadside “San Clemente” sign.

After studying background details in the photo, I located the San Clemente sign on Google Maps. I then drove a rental car there, south from Albuquerque through the Rio Grande Valley.

Meet San Clemente, New Mexico, along Highway 6, which once was a segment of Historic U.S. Route 66. Photo: Fred Swegles

A roadside sign in Los Lunas, New Mexico, recognizes the street as part of the pre-1937 U.S. Route 66 as a more modern mode of transport, a commuter train, passes. Photo: Fred Swegles

The Rio Grande River, which runs through Los Lunas, N.M., was the eastern boundary of the historic San Clemente land grant of 1716. Photo: Fred Swegles

A highway marker notes the historic 1540 arrival of Spanish explorers in the region of indigenous communities that became New Mexico. Photo: Fred Swegles

The trail to the Mystery Stone on Hidden Mountain, New Mexico, is not easy to follow but occasional hints do appear. Photo: Fred Swegles

There has been vandalism, but people making pilgrimages to the Mystery Stone just outside the boundary of the 1716 San Clemente land grand have deciphered the message, reading each line backwards, as the Ten Commandments written in Paleo Hebrew. Photo: Fred Swegles

There’s no town of San Clemente, just a smattering of farm-related businesses along New Mexico Highway 6, traveling west from Los Lunas toward Interstate 40.

On closer look, you’ll discover geographic curiosities. Could you guess, for example, that there’s a place called Laguna just up the road from San Clemente? Laguna Indian Reservation.

And at both ends of Highway 6, signs inform you that the obscure two-lane ribbon of asphalt running through San Clemente once was part of Historic Route 66.

Originally, Route 66 didn’t run through downtown Albuquerque. East of the city, it traveled south into Los Lunas, then west across farmland, through the San Clemente land grant.

Spanish explorers had arrived in 1540, settling in by 1598 and imposing their culture on indigenous people. In 1680, the locals revolted, evicting the Spaniards for 12 years, then a Spanish “Reconquista.”

Online you can find a documented history of the San Clemente land grant, which extended from Los Lunas’ Rio Grande River west to the Rio Puerco. In 1716, colonial administrators returned an expanse of land to a Spanish family that had held it prior to the 1680 revolt.

Los Lunas is named for the pioneer Luna family. Today, Los Lunas proudly proclaims itself a segment of the pre-1937 alignment of Route 66.

In 1937, the government rerouted Route 66 through downtown Albuquerque.

Los Lunas has a large San Clemente Catholic Church. At the entrance, an anchor symbolizes Saint Clement, namesake of our own San Clemente.

During the last decade of first century A.D., he was Pope Clement in Rome.

As the story goes, Clement converted so many Romans to Christianity that unhappy Roman authorities tossed him into the sea, tying an anchor around him.

The most intriguing tale of San Clemente, N.M., that I found was a hiking trail on Hidden Mountain, located outside San Clemente along Highway 6 beside the Rio Puerco, at the entrance to a public landfill.
Some people believe Hidden Mountain was the site of an ancient Hebrew settlement from the era of King Solomon. If true, it would remake American history.

Others say that petroglyphs found on Hidden Mountain are a hoax.

Do a YouTube search for “Los Lunas Mystery Stone 2018” and see what you think. It may make you wonder.

The mystery stone, which I photographed, is said to display the Ten Commandments, etched into a rock in Paleo Hebrew, a language not used since maybe 500 B.C.

The painstaking amount of work that must’ve gone into the engraving is impressive.

Atop the mountain is another stone etching, a zodiac map said to depict the sky as it would have appeared on Hidden Mountain during an eclipse on Sept. 15, 107 B.C.

If these are a hoax, someone absurdly patient went to a lot of work in an obscure, hard-to-find place.

Are the petroglyphs the work of pranksters? Or did ancient people, during the epoch of King Solomon’s oceanic fleets, cross the Atlantic and the Gulf of Mexico, sail up the Rio Grande, then up its Rio Puerco tributary to settle (or to become stranded) at this place now called Hidden Mountain?

The Puerco River looks dry now. But, I must say, photographing it from Route 6, I noted a very wide expanse of vegetation, indicating it once may have been substantial.

Ole Hanson, can your San Clemente vision of 1925 match a tall tale like this?

Letter to the Editor: Police Shootings