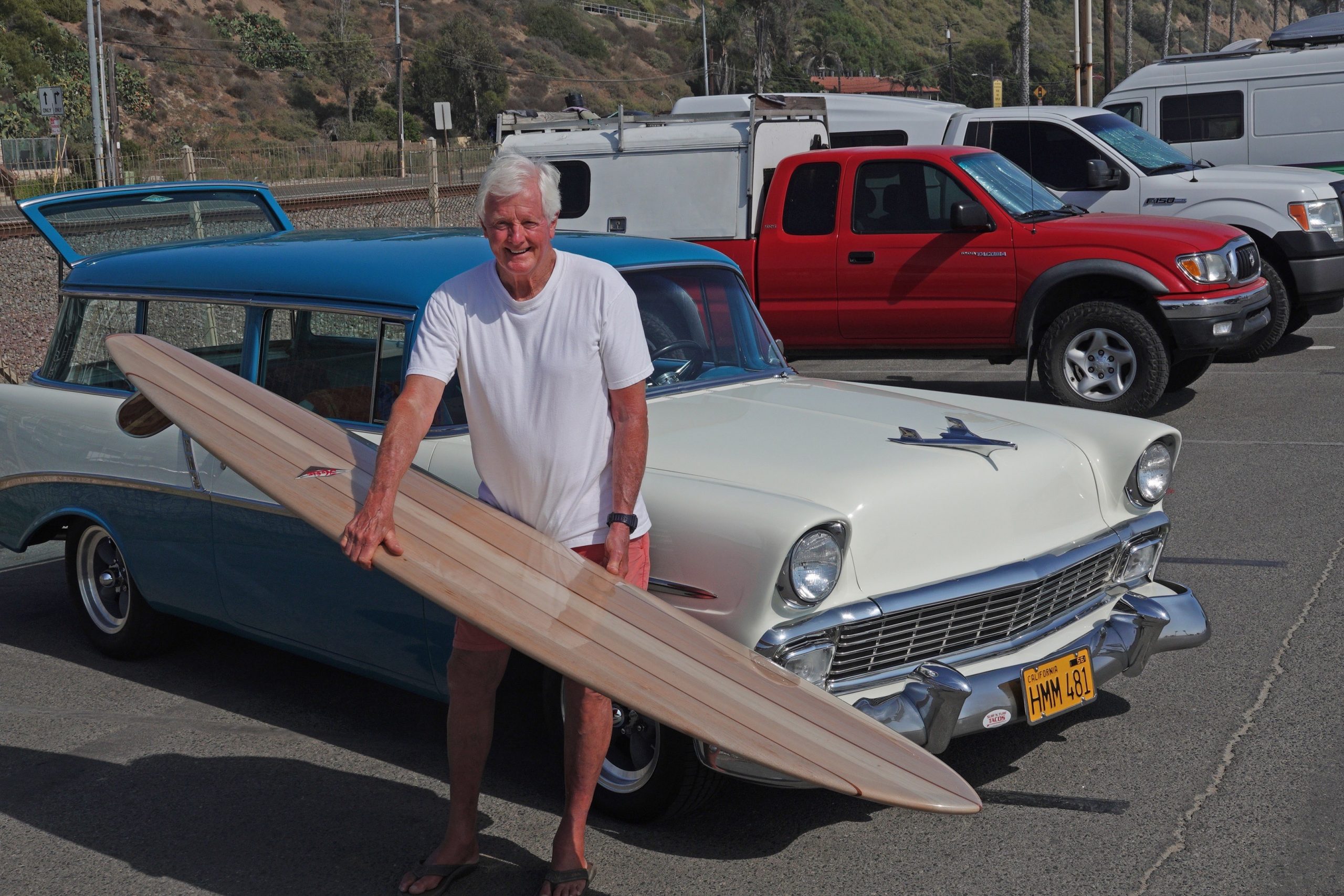 You’ve probably seen Chuck Bassett tooling around town in his blue 1956 Chevy station wagon. Or maybe, some years ago, at Ocean Festival woody car shows with his 1946 Ford woody.

Or at surf festivals, displaying collector balsa surfboards that he handcrafts.

Chuck and his wife, Ann, have been San Clemente residents since 1991. If you ask the retired firefighter about the day he discovered San Clemente, try not to laugh.

At age 15, he was a guest in the San Clemente Jail, picked up while hitchhiking to Trestles with two surf buddies.

Let’s go back to 1962. Chuck and two friends hitchhiked—with their surfboards and their parents’ blessing—to Doheny State Beach from a freeway onramp, 25 miles inland, to spend spring break camping and surfing.

That would change, after he and his pals Jeff, 13, and Keith, 14, learned from older surfers about a magical, forbidden surf spot called Trestles, a few miles south of Doheny on federal property—Marine Corps Base Camp Pendleton.

The boys couldn’t resist risking capture by the Marines to sample some elusive, perfect waves they were told they might have all to themselves.

Hiding their meager belongings, the trio hitchhiked south from Doheny with their surfboards. Their ride deposited them at El Camino Real and Avenida Santiago in San Clemente. They’d need to thumb again from there to Basilone Road.

They took turns thumbing. A passing police officer eyeballed them.

Chuck, bored as morning wore on, discovered a vacant lot. Maybe he could ride the grassy, weedy slope on his longboard.

“On my last ride, I braved standing up,” he wrote in a memoir, “but had to jump off near the bottom of the hill and landed in some dry brush and trash.”

“Blood was pulsating from my toes,” he later wrote. “The extreme pain made it impossible to walk.”

His pals, hearing him scream, lugged him back to the sidewalk. Two off-duty Marines walking by used a USMC uniform belt to apply a tourniquet to Chuck’s thigh. It was noble but unnecessary, Chuck insisted. It also attracted attention.

The police officer who’d driven by got a radio call reporting a juvenile seriously bleeding. Activating lights and siren, the cop skidded to a halt and bolted from the patrol car without turning off lights and siren. People were gathering. Chuck’s pals were freaking out.

“Officer Friendly,” as Chuck called him, took Chuck to a doctor. His pals and the surfboards were transported to Avenida Miramar, the police station.

Chuck, wearing seven stitches and enduring tetanus shot pain, soon joined his friends, confined to a small jail cell, next to “a scruffy derelict, handcuffed and shackled to a wooden bench.”

The shackled prisoner threatened to shed his handcuffs, beat up the boys and escape jail, taking their money.

“As if we had any money,” Chuck wrote. “He was trying his best to scare us until Keith reminded him that he was secured to the bench, handcuffed, and was helpless and in no position to threaten anyone. ‘Why don’t you just shut up, you idiot jailbird!’ That ended his tirade.”

Still, the boys had to coexist with him. Keith’s mom wouldn’t get off work until 5 p.m., would have to drive to San Clemente and would not be in a good mood.

“She took one look at our sad selves and our hardcore cellmate and went ballistic,” Chuck wrote.

Only not at the boys.

“She ranted and raved at the top of her lungs at the police officers on duty for placing three young boys in a cell with a criminal,” Chuck wrote. “Within minutes, we were free to go. All the police were interested in was getting us out of there and taking her loud mouth with us.”

In the car, she calmed down.

The next day, the boys were back at Doheny. Thrilled to find their belongings untouched, the boys resumed surfing. To protect his foot from infection, Chuck surfed in tennis shoes and socks.

Other surfers “stared at me like I was nuts,” Chuck recalled. “I had to ensure I rinsed my feet and kept my stitched foot dry and clean, and stay out of the infamous Polio Pond near the lifeguard shack at Doheny.”

Years later, graduating college with studies in woodworking and industrial arts, Chuck said he tried teaching middle school shop classes in Garden Grove. “Not at all fun being cooped up all day long with hormone-filled adolescents capable of murdering you just to get a few laughs from the other students,” he said.

In 1970, he took firefighter exams for Newport Beach, Huntington Beach and Costa Mesa. Costa Mesa hired him, after he had interviewed with Deputy Chief Ron Coleman, who would later become San Clemente’s fire chief.

Chuck and Ann raised two daughters. When the girls went off to college, the parents sold their Tustin home, moving to San Clemente.

This time, there was no jailhouse welcome. The waves at Doheny, San Onofre and Trestles would have to do. Retiring from CMFD in 2001, Chuck focused, for fun, on surfing and woodworking—fine-art balsa surfboards.

“Whenever I pass through Dana Point, I make a point to admire the bronze sculptures of Phil, Hobie and Bruce Brown and feel very proud I was a part of this project,” Chuck wrote.

The storyteller is compiling his memoirs, a potential autobiography of colorful coming-of-age tales and adult adventures, reliving surf culture as it evolved on and around the beaches at Newport, Doheny, San Clemente, Trestles and San Onofre.